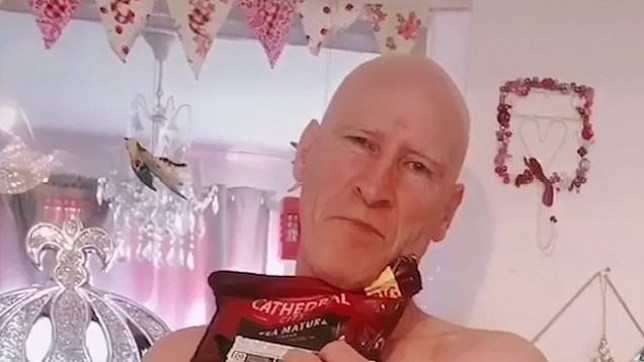 Mark with some of his beloved cheese (Picture: Kennedy News and Media)

A cheese-loving granddad has revealed that he eats 14lbs of cheddar a week, but is still ‘fit as a flea’.

Mark King has gone through two whole blocks of cheese for the last 25 years, all lovingly placed into sandwiches with pate, Bovril, mayonnaise, and sausages by wife Tracey Winter.

Due to his daily dairy intake, Mark consumes a gut-busting 22,513 calories in cheese alone per week – the equivalent calories of 40 Big Macs.

A full 400g of cheese goes into the evening snack before bed, which is on top of the cheddar sarnies the 52-year-old takes with him for lunch at the timber yard where he works as a logger.

Over the last 25 years, the dad-of-four has wolfed down 7.28 tonnes of the dairy product – more than a tonne heavier than an adult male African elephant. Despite this, though, Mark is the proud owner of an eight-pack – something Tracey puts down to the physical aspect of his job.=

In fact the granddad-of-one, who also works as a gardener, claims to never have even suffered heartburn or indigestion and his wife credits his strong immune system on the vast amounts of calcium she reckons he consumes in his cheese.

Mark, from Tonbridge, Kent, said: ‘I’ll have anything on the sandwiches – Bovril, Marmite, pepper, mayo, pate, seafood spread, sausages – anything.

‘But it’s always got to have cheese with it.’ 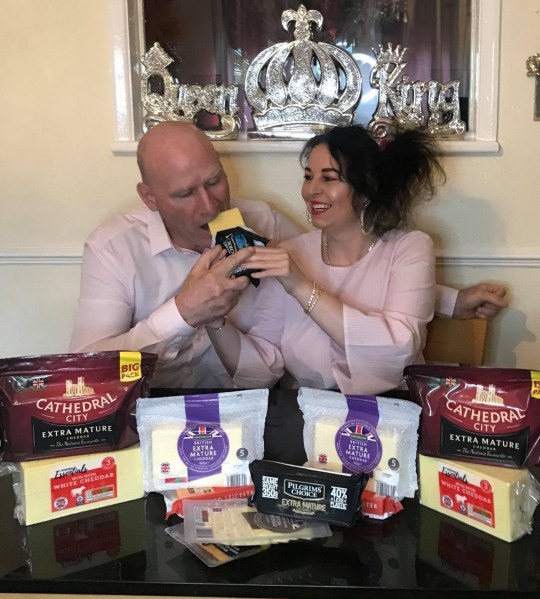 ‘Mark’s in great shape still. He’s picking up and lugging logs around all day every day so that’s where all the calories go. He’s got an eight pack,’ said 47-year-old Tracey.

Speaking about her husband’s eating routine, she added: ‘We’ll have a big dinner around 6pm and then he’ll eat those sandwiches without fail between 10.30pm or 11.15pm.

‘We’re quite traditional so I cook quite a lot of roast dinners but regardless of what meal we eat, he’ll have those sarnies later on. His plates are always double the size of everyone else’s.’

A video of Tracey making the daily snack went viral after she uploaded it to social media, racking up over 1.3 million views, with some commenters calcuating the couple had spent more than £27,000 on cheese over the last 25 years. 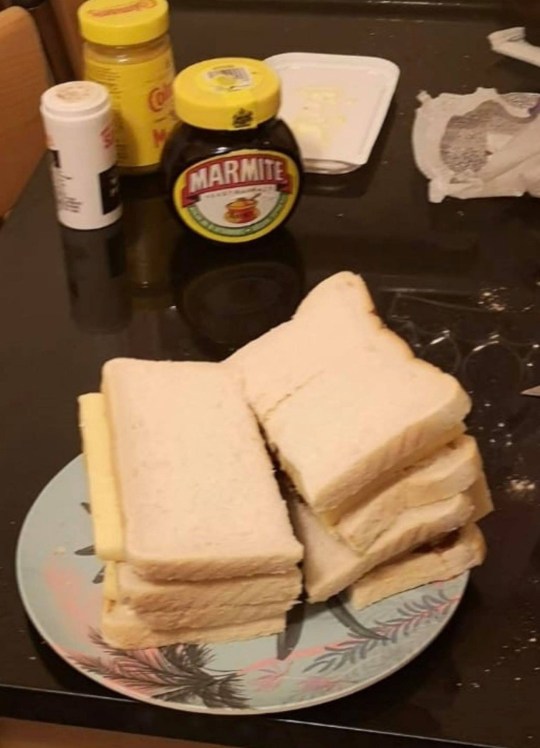 One of his post-dinner snacks (Picture: Kennedy News and Media)

Tracey said: ‘When people told us we’d spent that much over the years I was gobsmacked.

‘Mark’s pretty much the only one in the house who eats cheese. I’m not big on it, I’ll have a little bit of Edam sometimes and [daughter] Scarlett [10] will have some.’

Tracey tried to ask Mark to cut down to cheese on weekends only, but it’s been hard to beat the habit of a lifetime, and so he compromises by sometimes having ham sandwiches instead.,

‘He’s done it for the last 25 years, I never thought anything of it until I put the video on TikTok,’ said Tracey.

‘At first I thought “eurgh” because of all this cheese and mayonnaise and pepper. Quickly it became a normal thing for me.

‘I couldn’t eat cheese like he does but it’s just what Mark does.’

It ain’t easy being cheesy, but it’s working for him.

How much cheese is recommended?

There are no official limits or even recommended amounts of cheese it’s safe for humans to consume. Rather, look at the calories and saturated fat to see if you’re staying within guidelines.

For example, 100g of cheddar contains around 400 calories and 19g saturated fat. An adult would typically be recommended to eat somewhere around 2000 calories per day and 16 to 22 grams of saturated fats a day.

Because cheese is very low in fibre, when you do enjoy it it’s best to do so with grains, fruits, and vegetables. This helps keep your digestive function at its best.