LOVE is in the air on this romantic Monday.

It’s Valentine’s Day and EFL footballers have shared their love stories with me. From meeting on a Vegas stag do to being told off by a teacher for talking too much in class, these stars have told all on meeting the loves of their lives…

IT was love at first sight for Fulham captain Tom Cairney when he met his glamorous former model fiancee Abbie Richards while in Las Vegas nearly six years ago.

Tom, 31, and Abbie, 28, are engaged and expecting their second son in May to join their other little boy, two-year-old Aubrey.

The midfielder said: “I was on a stag do and Abbie was on a hen night and we met at the famous OMNIA nightclub.

“We were staying in the same hotel and, unbeknown to us at the time, even on the same flights.

“We just hit it off. It was that feeling that I had found the one.

“She does everything. She is with our boy all day. She’s supportive, caring, family-orientated and has a big heart. That’s why our relationship has lasted so long.

“Abbie isn’t going to be sticking Super Sunday on the TV but she does enjoying coming to watch me play and brings our little boy, who is into it.”

The happy couple celebrated their love last night by “going to a nice restaurant and staying in hotel.” 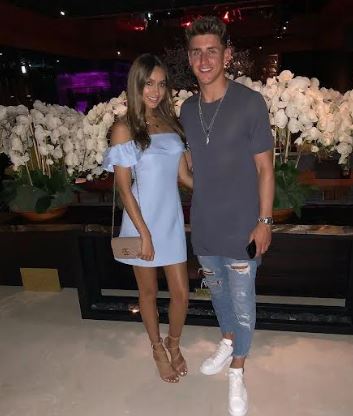 The pair are engaged and have a two-year-old boy, Aubrey 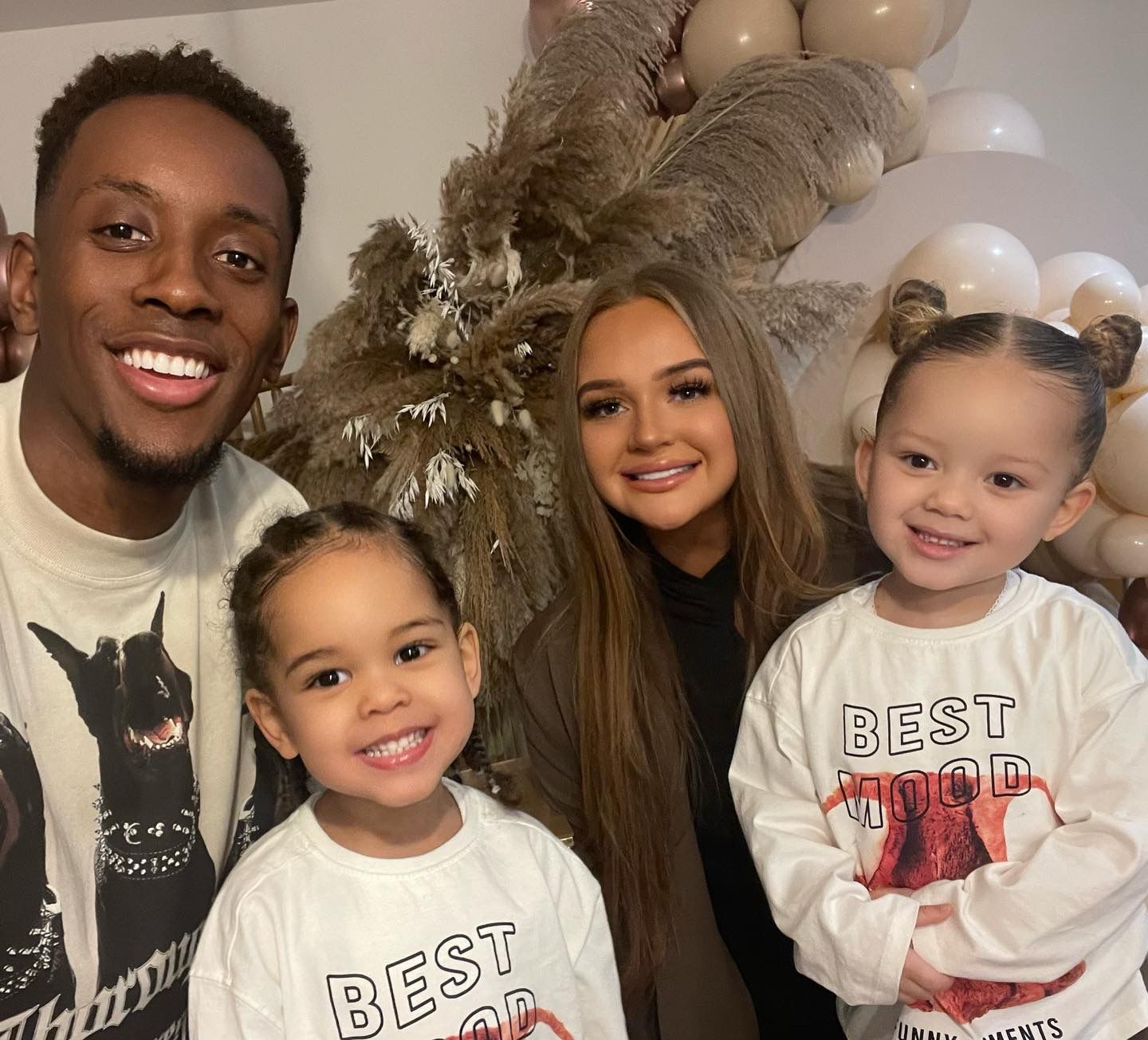 Jamal Lowe and his childhood darling Holly Kelly could not be happier with four-year-old Bonnie, two-year-old Dexter and a baby on the way shortly

BOURNEMOUTH striker Jamal Lowe and childhood sweetheart Holly Kelly, both 27, used to get told off by their teachers for talking too much to each other in class – and have now been engaged for five years.

Jamal said: “We went to Whitnall High School in Harrow and we had to sit in alphabetical surname order – so ended up always seated together. We were 15 and got to know one another like that.”

Traditional man Jamal asked Holly’s parents for their permission for her hand in marriage and then popped the question in a wonderful romantic setting.

He said: “The most nervous part was asking Hol’s parents. I had to really build myself up for that and her mum started crying when I finally got round to t.

“And then I got down on one knee in a packed restaurant called the Sky Garden in London and thankfully she said yes. Both our families were waiting for us in the rooftop bar and we celebrated our engagement with them straight after.”

Jamal loves Holly because she is “beautiful and kind” and the happy couple now have a four-year-old daughter Bonnie and two-year-old son Dexter with a baby due in the next week.

They plan to have a nice meal and enjoy a family day. 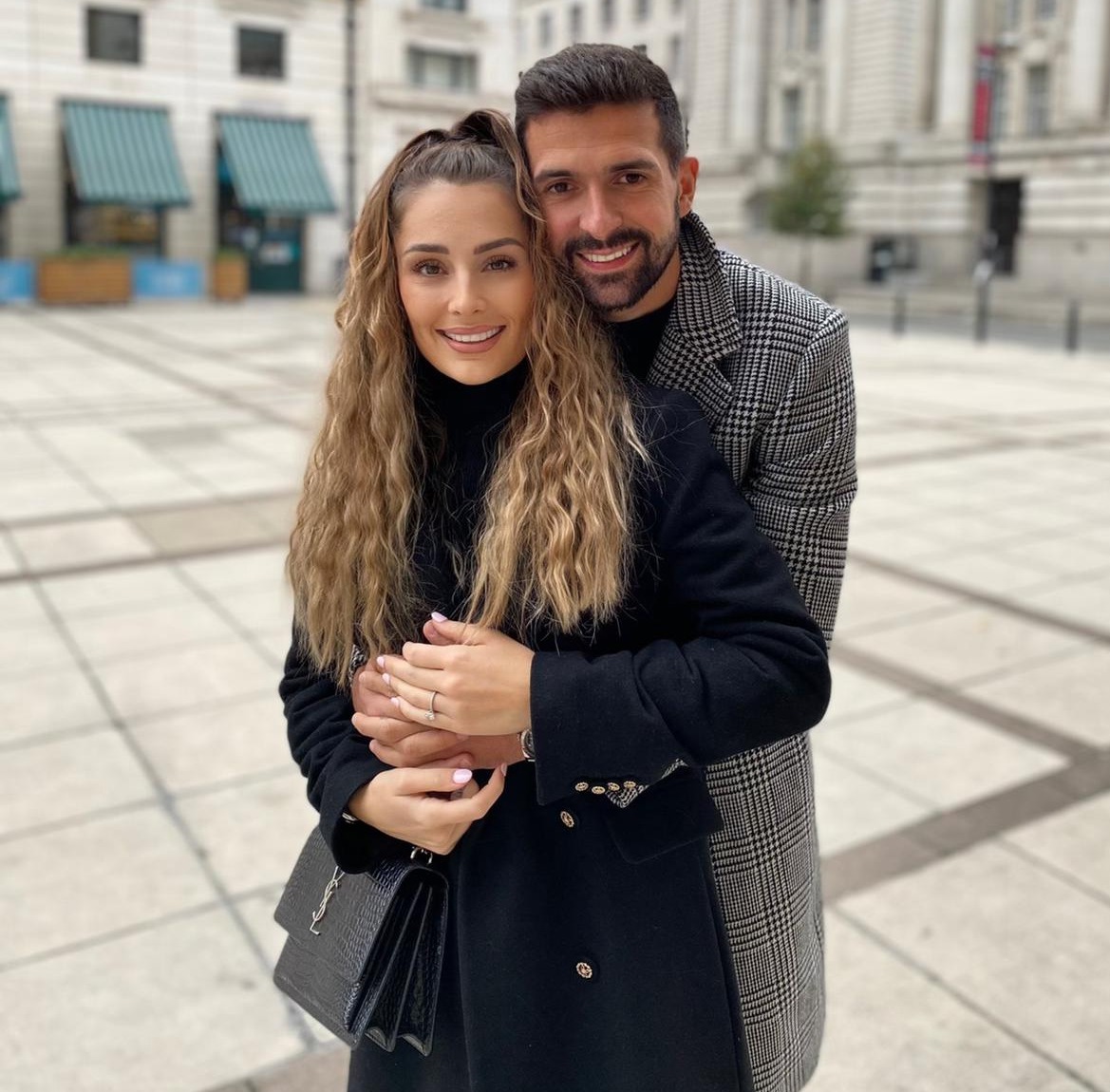 QPR’S romantic French star Yoann Barbet, 28, got down on one knee in November to propose to his fiancee Melanie Rousselle, 26, in a Dubai desert – and the loved-up couple will wed next year.

The defender said: “I was shaking with nerves – but thankfully she said, ‘yes’ after a few seconds. I’ve done quite well on this one!”

Yoann and Melanie are both from Bordeaux and met through mutual friends.

He said: “I saw her photo first on a friend’s Instagram. I didn’t know anything about her. Firstly she was very pretty and that’s why I was interested and wanted to meet her. We met in the summer, spent all day together and it was like we had known each other for years so we hung out for the entire six weeks of the closed season.

“By the time I was due back to London for pre-season, her job was about to finish and I told her, ‘If you’re a girl who likes to take risks and try something, why not come over and live with me?’ And we’ve been together since.”

The couple – who have a 22-month-old son Eyden – celebrated their happiness last night by having a nice meal in London. 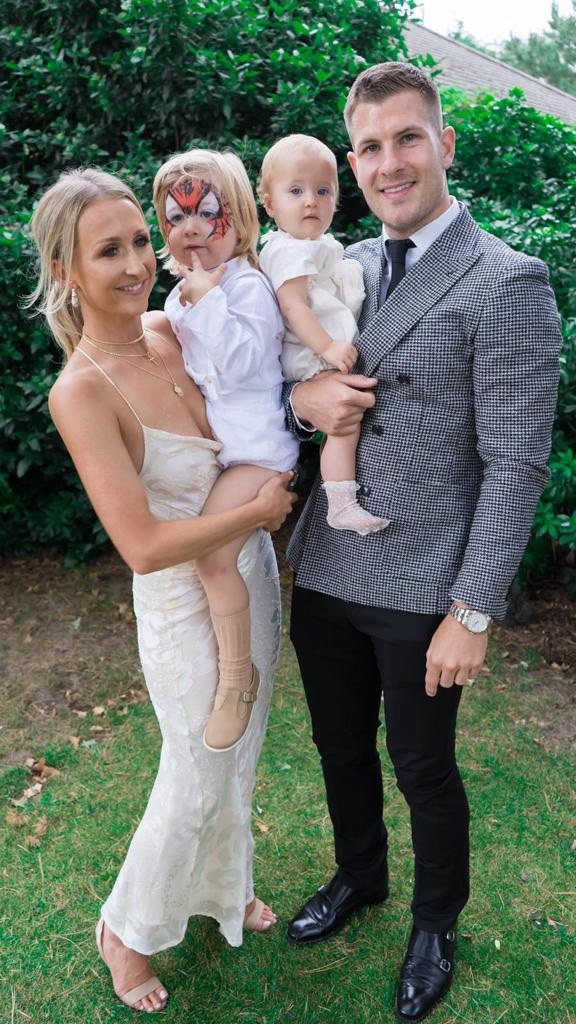 James Collins is so happy with his lovely family – fiancee Georgia, son Cooper and daughter London

YOU get less time for murder… that was how Cardiff and Republic of Ireland striker James Collins, 31, jokingly described the 17 years since he first met his flame Georgia Downie, 30.

The couple from Coventry were introduced to each other through pals and developed a friendship before dating when James was 18.

James said: “She’s very attractive. We just clicked and wanted the same things in life. We both wanted kids and now have a beautiful boy Cooper, who is 6, and a lovely little girl London, who is 3. I think us knowing each other for a few years before dating helped us as we had grown up together a bit.”

Georgia is a football fan and supports whoever James plays for – although both have dads who are ardent Coventry fans.

James popped the question in Central Park, New York, six years ago and said: “It was the most nervous moment of my life, I’d rather play in front of a stadium of 60,000!”

The Cardiff ace promises that wedding plans are about to get underway soon but had their Valentine’s Day yesterday with a nice meal and spending time at home with their two little ones. 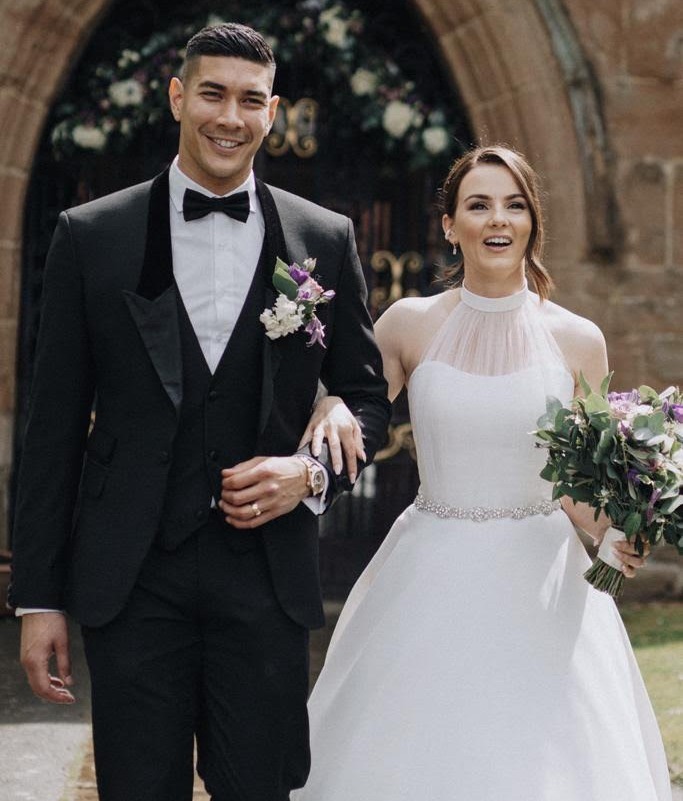 BIRMINGHAM keeper Neil Etheridge and his wife Alexandra will be getting the perfect Valentine’s gift this year – a baby girl.

Alexandra, 29, is a few days overdue on giving birth and the excited couple are looking forward to having their first child together.

Neil said: “I’m so excited but nervous at the same time because it’s our first child. It will be the perfect Valentine gift for us.”

They met in Ascot when she was working for a friend and eventually started dating before getting married in Solihull at the end of last season after a whole string of postponements due to Covid.

Asked what attracted him to Alexandra, Neil said: “I’d be lying if I didn’t say her looks. You always must have attraction. We then hit if off.” 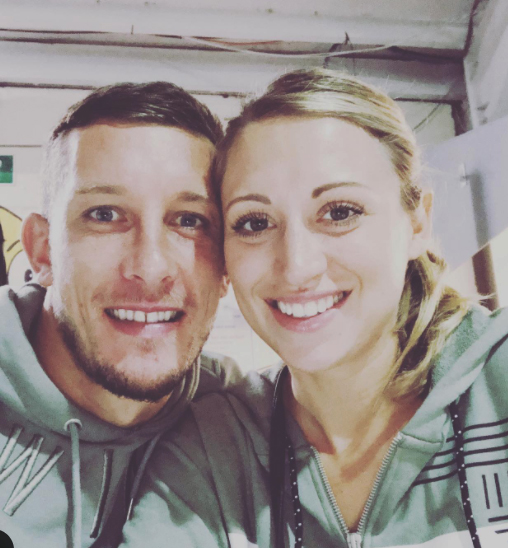 CHARLTON skipper Jason Pearce and his better half are childhood sweethearts.

They met at the age of 11 as classmates at Court Moor School in Hampshire, officially got together romantically when they were 17, tied the knot eight years ago and now have three sons.

Jason, 34, laughed: “We just need to produce another two children and will have a five-a-side team!

“But, seriously, it’s amazing we’ve been together for more than half our lives and known each other for 23 years now.

“Charlotte has followed me around the country my entire career supporting me, is my soul mate and the love of my life so I can’t thank her enough.

“We’re going to celebrate together tomorrow night. I’ve got a nice surprise prepared for her.” 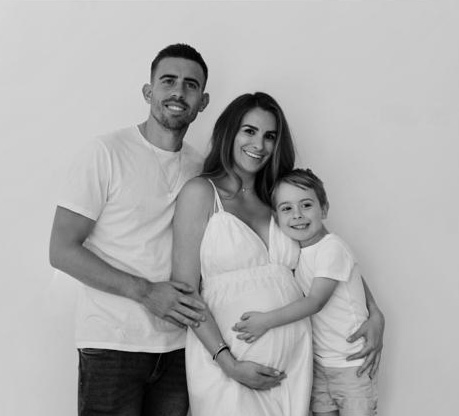 GILLINGHAM midfielder Olly Lee, 30, and his fiancee Beth Cowen met while they were still at school and been together since they were both 17.

They will make it third time lucky by finally tying the knot in Dedham, near Colchester, in June after two cancellations due to the pandemic.

Olly, son of Newcastle and Charlton legend Rob, revealed his mum Anna matched them up and said: “Beth went to an all-girls school around the corner from mine in Brentwood and went on holiday with my mum’s best friend’s daughter.

“And my mum told her, ‘I’m going to set you up with my son!’ And to be fair, she’s picked a good one for me – and takes most of the credit!”

The midfield ace was first attracted to Beth because she was “a tall brunette who ticked so many boxes for me”.

He added: “We get on so well and haven’t stopped laughing since we were 17.

“She’s been on my full football journey – moving to Birmingham and Plymouth. I couldn’t have done it without her.”

There was a stage when Beth got as passionate about football as Olly, who laughed: “She’d be as upset as I would after defeats – but since we’ve had a couple of kids together isn’t that fussed anycmore.”

The happy couple will celebrate by taking their two children – Alfie, 4, and five-month-old Lottie to LegoLand. 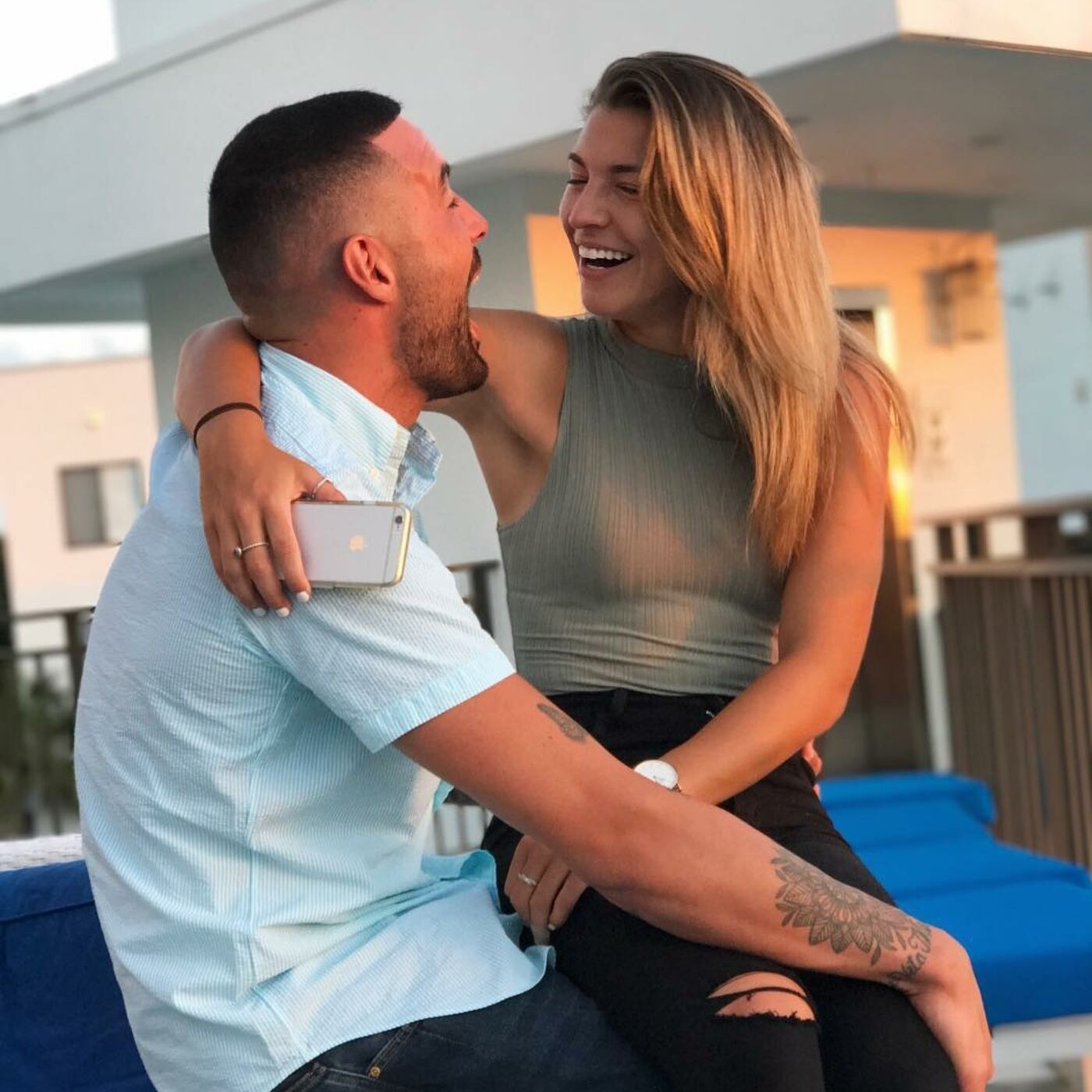 THIS is a true football romance. Sutton’s Australian keeper Dean Bouzanis, 31, met his lady Steph Catley, 28, while the pair were at Melbourne City five years ago.

Ex-Liverpool kid Dean said: “Steph was captain of the women’s team. We’d bump into each other around the club and would speak a lot. Then, before you knew it, one thing led to another and we became a couple.”

They had to make the relationship long-distance for a while as left-back Steph – who has 100 Australia caps to her name – played in the States for Orlando Pride and Reign FC with them both making off-season trips to visit each other.

But in 2020 she moved to Arsenal while Dean joined Sutton – and they could not be happier.

Dean said: “We don’t really talk that much about football but if I play a game or she plays, we’ll watch each other when we can and chat about it.

“What attracted me to Steph when we started dating was how honest and humble she was as a person, she’s down-to-earth even though she’s played at the highest level and done so much in her career. She never blows her own trumpet.”

Dean says he will treat his other half to a nice meal out. 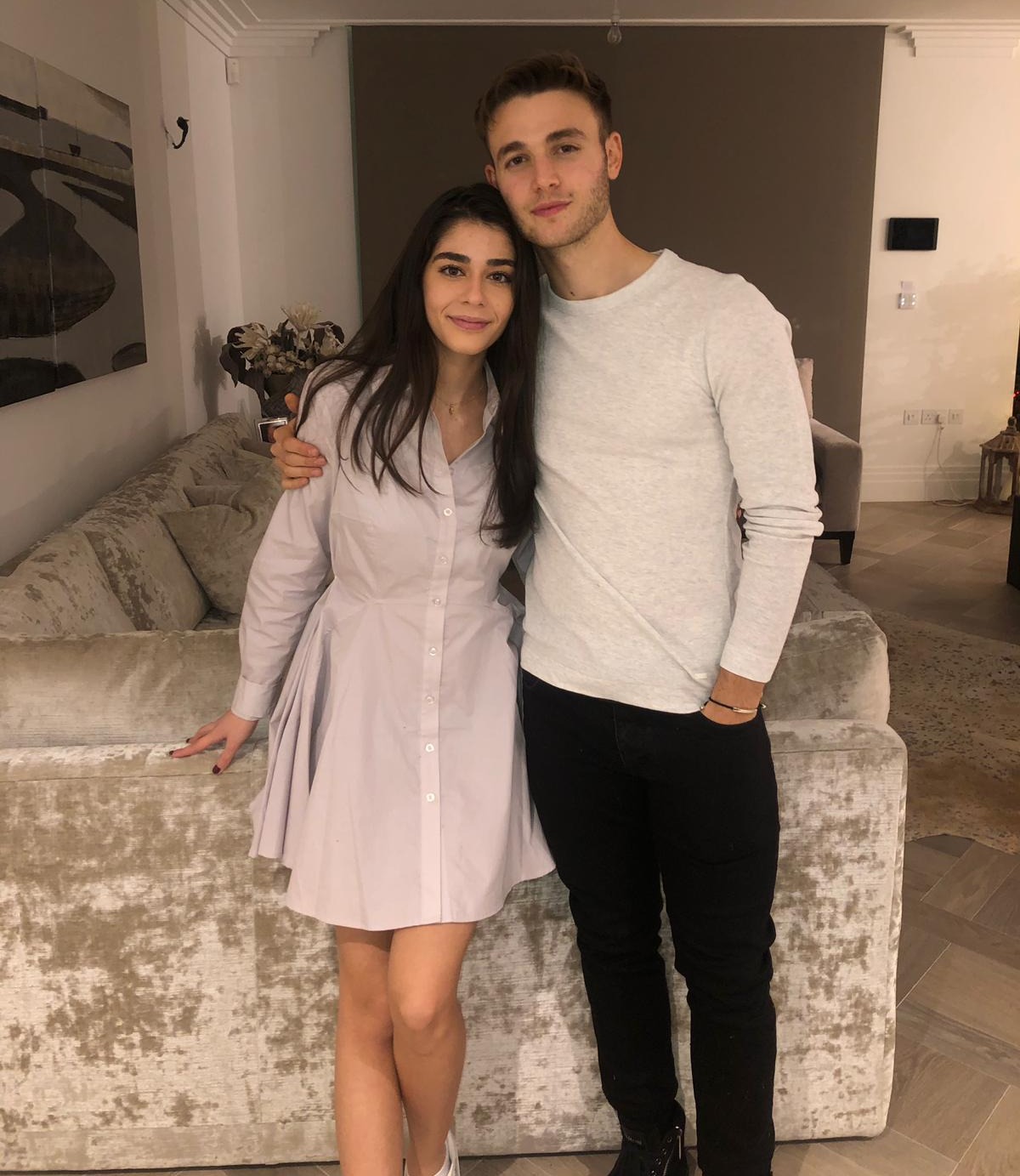 CRAWLEY left-back Nick Tsaroulla, 22, met his flame Anastasia Thomas six years ago after meeting at a mutual friend’s birthday party and they hit it off immediately.

He said: “Her family are Greek-Cypriot like mine and we were born just four days apart.

“Apart from being so beautiful, she has a kind heart and stuck with me during all the bad times. While other people disappeared, she has always been my rock.

“I love her kind nature. She just wants to help people and is currently studying at King’s College in London to be a dentist.

“Anastasia has been converted by me into a football fan – and comes to a lot of my games.

“She is away in Portsmouth this week so we’re going to delay our Valentine’s Day celebration a week – but I’m going to book us a nice restaurant and send her some flowers.” 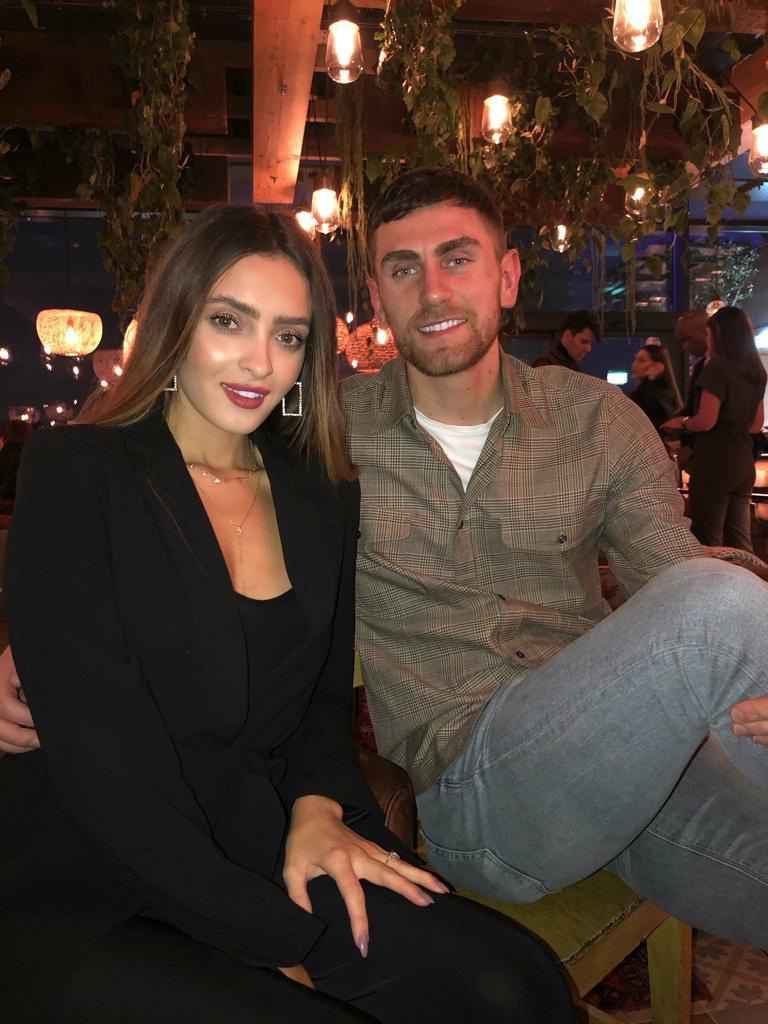 Forest Greeen keeper Luke McGee and his other half Rhea

FOREST GREEN keeper Luke McGee, 26, got married to his wife Rhea 14 months ago in a registry office – but they plan to do a proper wedding event in Crete next year.

The couple have been together for five-and-a-half years and Luke said: “We’re both from the Edgware area of North London but met each other properly while away on holiday and came back home and started dating.”

Luke cites her down-to-earth personality and beautiful looks as the reason he was attracted to Rhea.

They now have a one-year-old daughter called Everly.

He said: “We’ll go for dinner with our little girl and celebrate together.”