Top: a mirrored screen was placed at the entrance to the store. Above: the exterior of the store is covered in a textured faux stone

“The brand’s concrete requirement for this space design was a modern cave,” said FOG Architecture.

“We chose not to directly create the natural appearance of caves but, instead, presents the characteristic elements of material textures to inspire the sensory experience.” 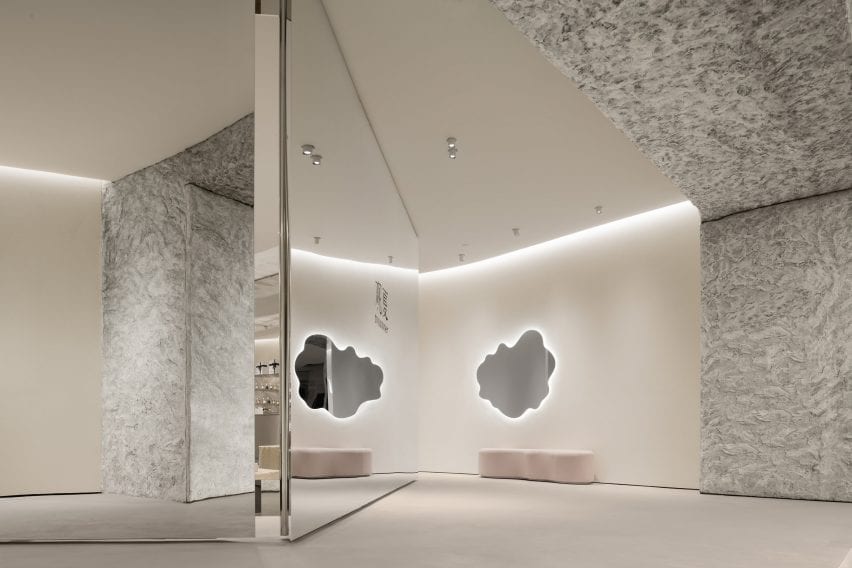 The entrance to the store is marked by a large faux-stone wall and a mirrored screen, which leads visitors into the store.

The studio explained that the large mirrored screen was designed to draw passers-by into the store while referencing screens typically used in homes and domestic spaces. 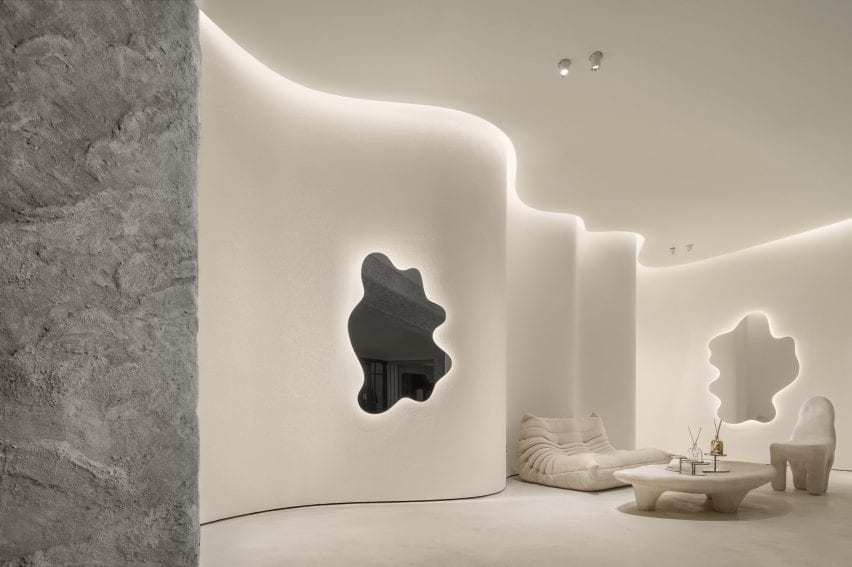 Curving walls were used along the perimeter of the store

“The curiosity of what is behind attracts the beholders to walk inside,” FOG Architecture co-founder Zheng Yu told Dezeen. “The surface of the screen is usually decorated with an illustration of natural scenery.”

“It is a metaphor of the space hidden behind. And this is the reason we placed a scaled up, mirror polished screen as the central spatial element. It illustrates beauty in a restrained manner.” 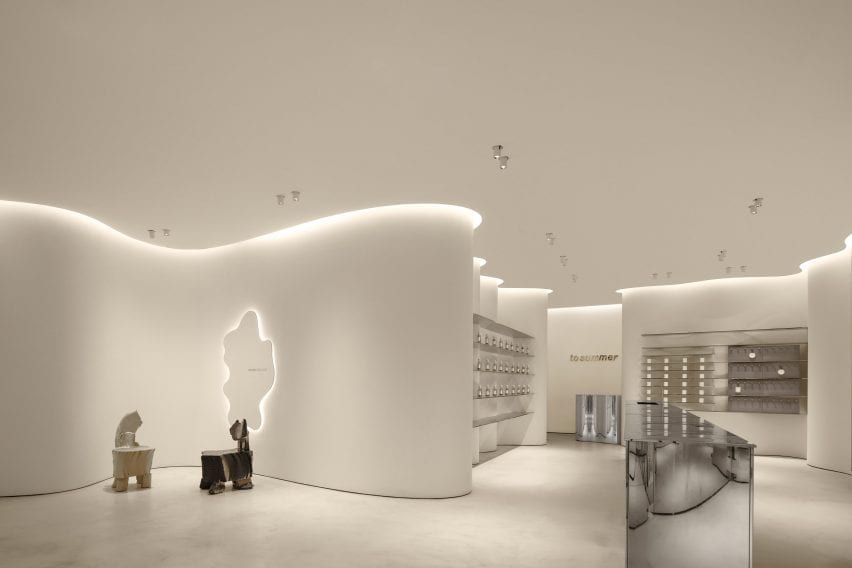 The store was divided into multiple zones

Natural-toned, undulating walls envelop the interior of the store and are illuminated by strip lighting set within the ceiling.

The interior was divided and zoned into a collection of small sections each with its own functions, housing retail space, exhibition space and installation areas. 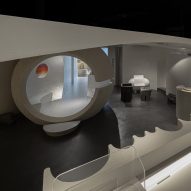 Formoral is a skincare store that resembles a “desert planet”

A cream Togo by Michel Ducaroy for Ligne Roset, an off-white Playdough chair and coffee table by Karstudio as well as amorphous mirrors were placed throughout the store suggesting the idea of domestic space.

“The aim of the furniture is to convey a sense of the domestic,” said Yu. “That’s why we named this space a ‘Living Room’. A space that gives people a place to breathe in a busy and fast-moving shopping mall.” 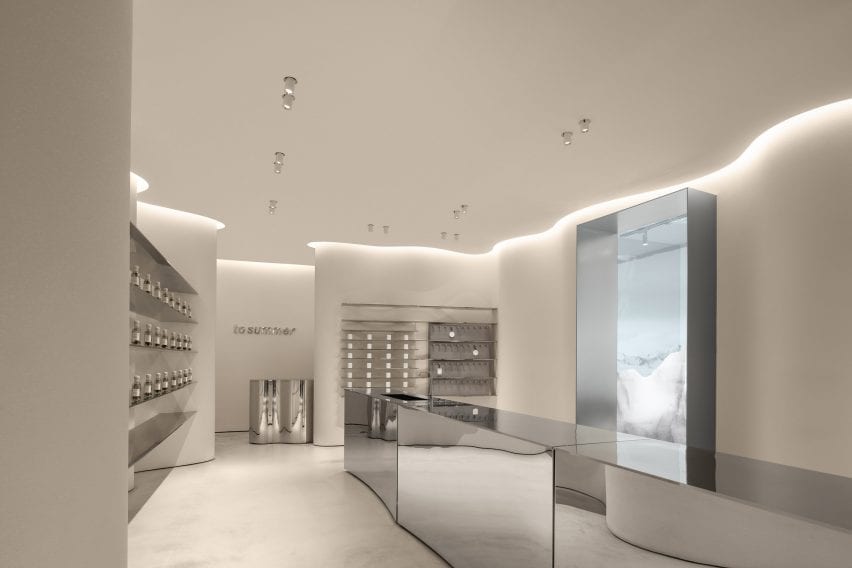 A long metal island contrats with the softness of the store

Custom “timber rotten” chairs designed by British designer Max Lamb were also placed across the store and in niches formed by its curved walls.

“In a way, Max Lamb was also our main inspiration during the project,” Yu explained.

“The [chairs] lacquering was smooth, shiny and colourful while the foam is tortured, torn, scarred – combined the materiality itself gives me an illusion of heaviness similar to a piece of timber rotten through time, but it is lightweight and smooth and newly made.” 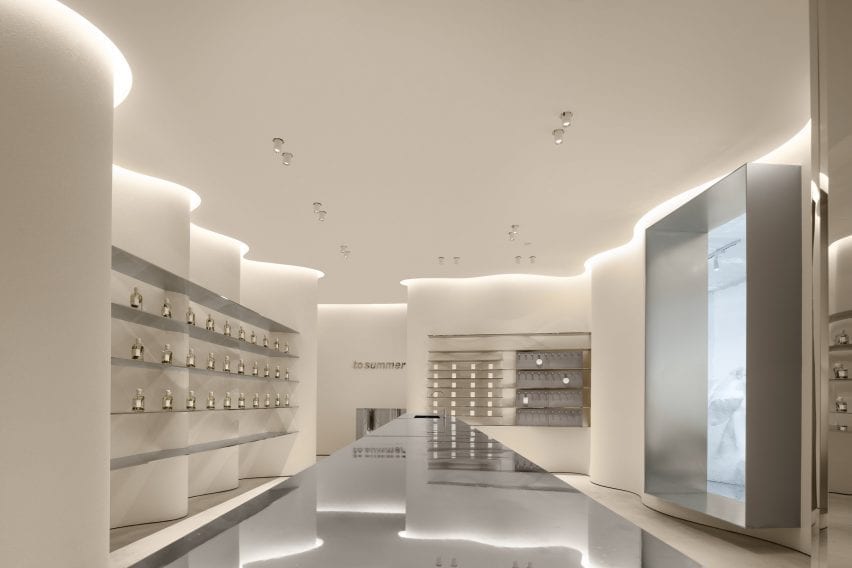 Shelves were built within the curving walls

An exhibition and retail space at the rear of the store has a series of shelves organised around a long reflective metal island that contrasts to the curving walls it is surrounded by.

Rectangular metal shelves were suspended along the undulating walls, drawing attention to the irregularity of the space while displaying products like artworks. 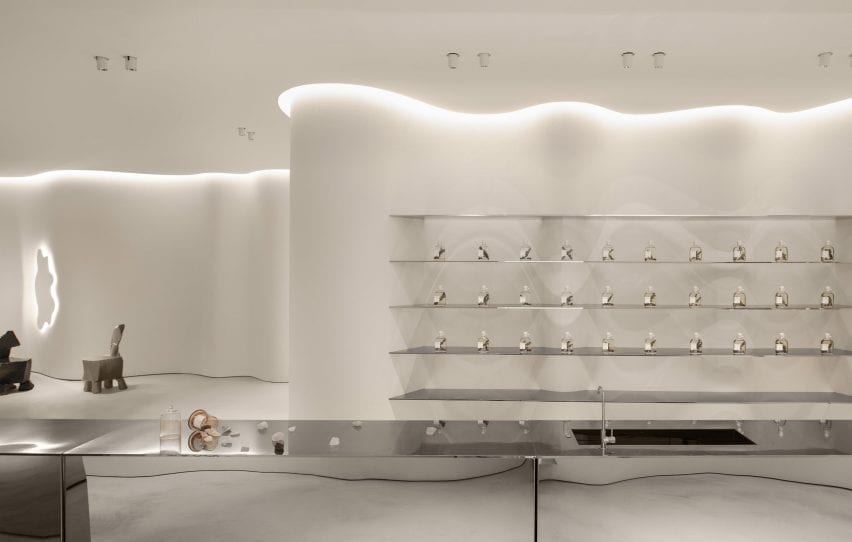 A metal cashier’s table was tucked behind a curving volume and mimics the shape of its walls, forming a rounded counter space that becomes an extension of the walls.

“[The store] transforms the original cave concept into spatial language, integrating it into this realistic space full of modern oriental feeling to present a delicate balance between commercial and art, domestic and public realm, natural and artificial,” said the studio. 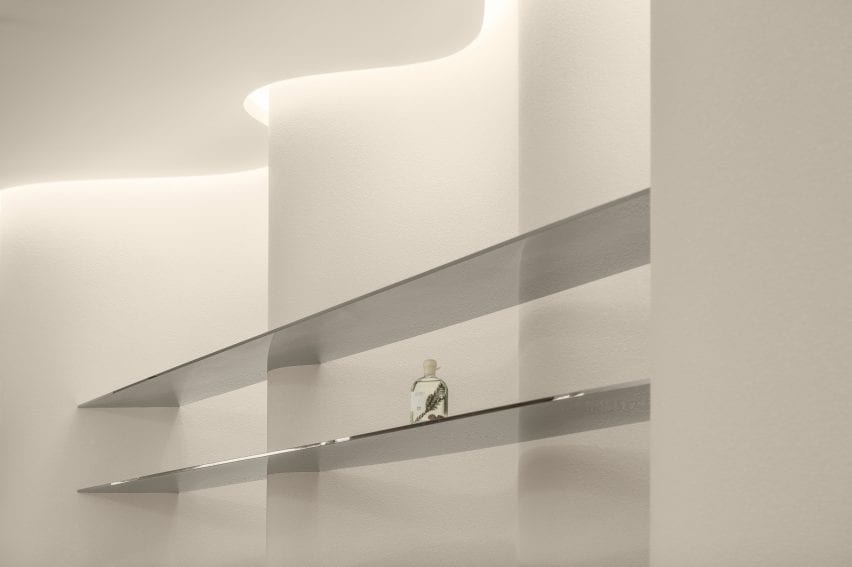 The display areas were designed to showcase product like artwork

FOG Architecture is a studio with offices in London, Shanghai and Chongqing founded by Yu and Zhan Di.

Other Beijing projects with curved walls include this avocado-green space age informed hair salon and this kindergarten with a rooftop playground by MAD Architects.

Photography is by Inspace.