Vladimir Putin could be planning to strike Europe’s key infrastructure using deep-sea sabotage techniques after the Nord Stream pipeline was rocked by explosions, experts have warned.

Pipelines, rigs and undersea cables could be next on Russia‘s hit list as it tries cow Europe into ending support for Ukraine.

An aerial shot by Swedish coast guards shows the release of gas from the Nord Stream gas leaksCredit: Reuters 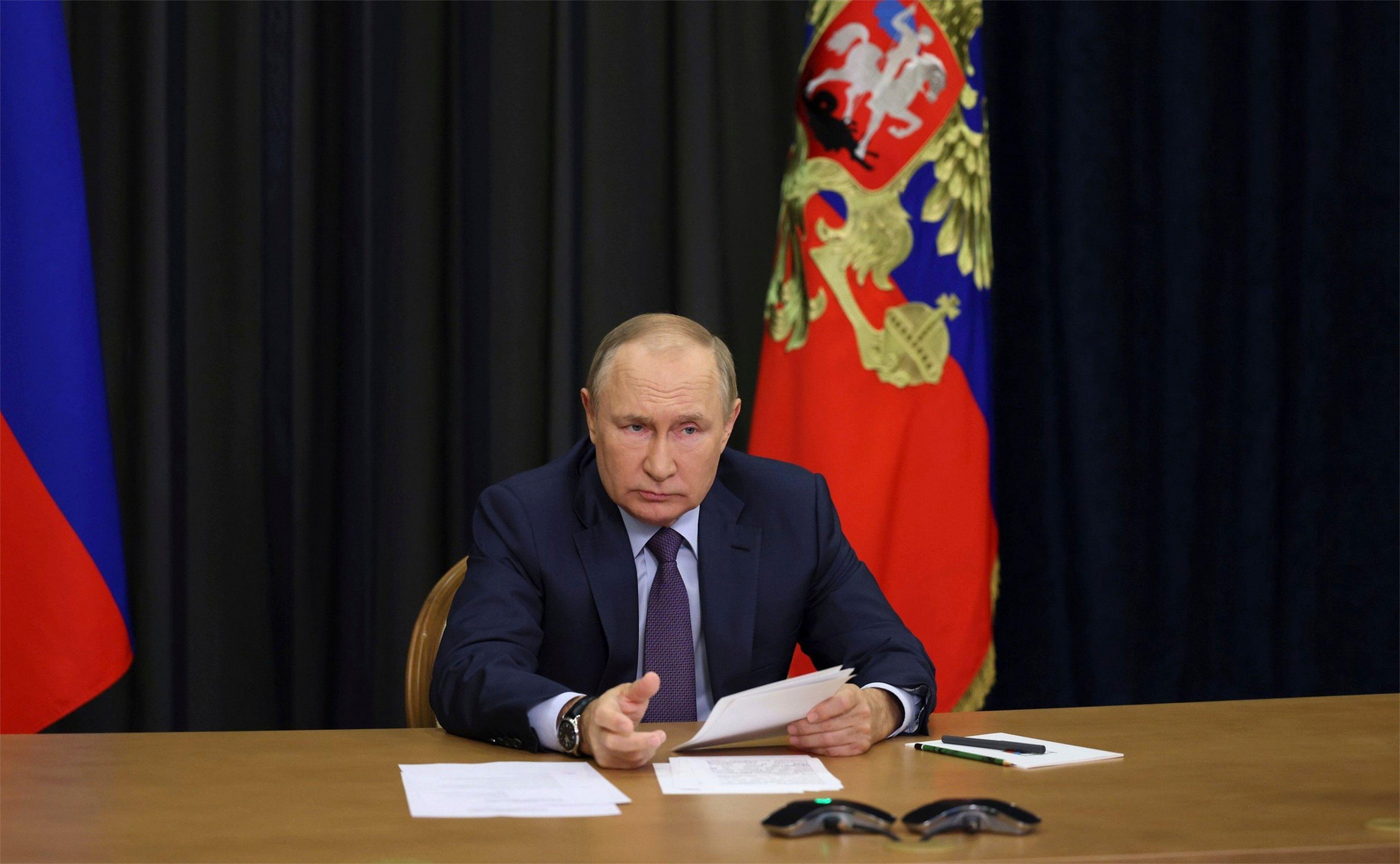 Mad Vlad has threatened to use ‘all means available’ to protect Russian territoryCredit: Alamy 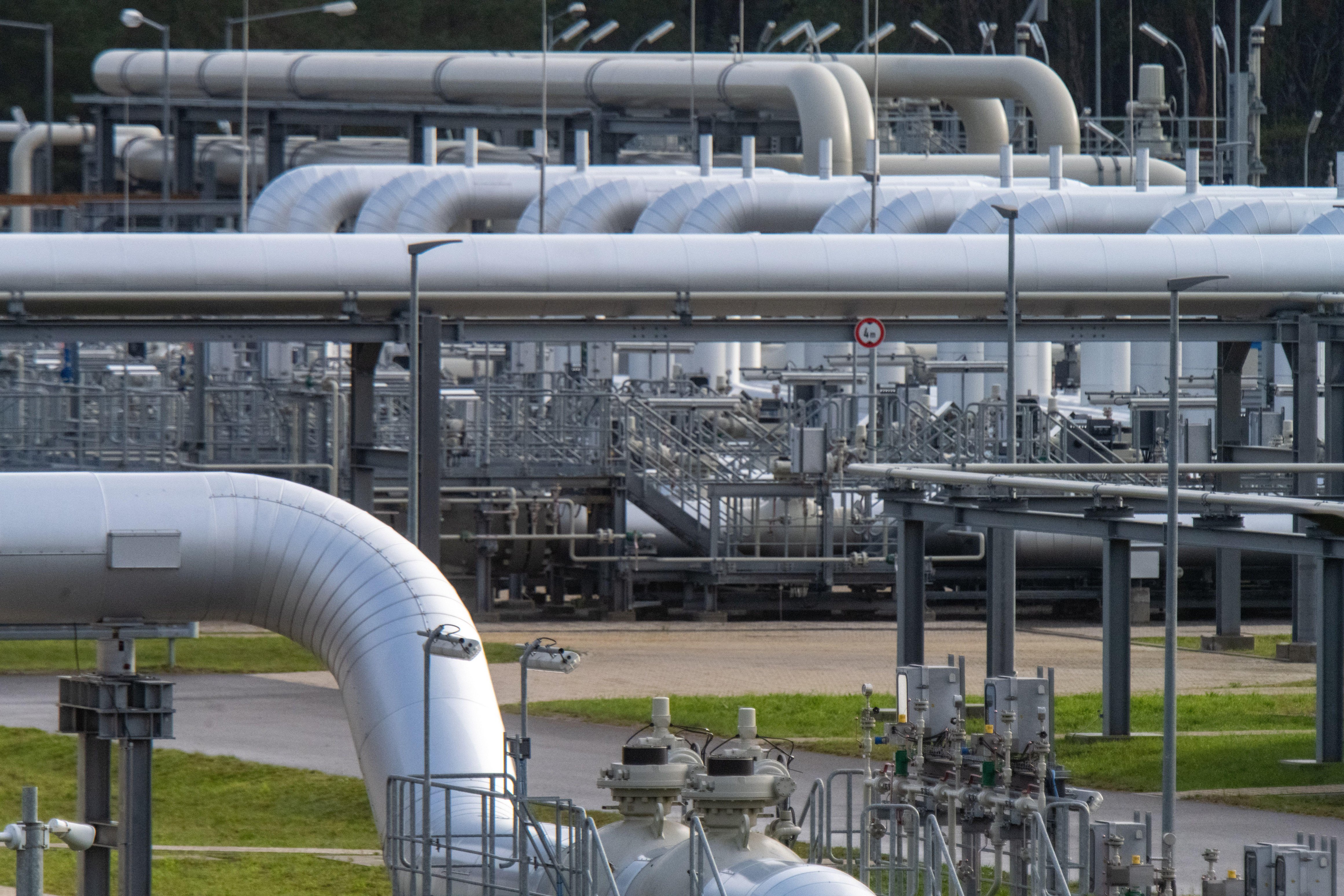 There are fears Putin could strike other vital European infrastructureCredit: Alamy 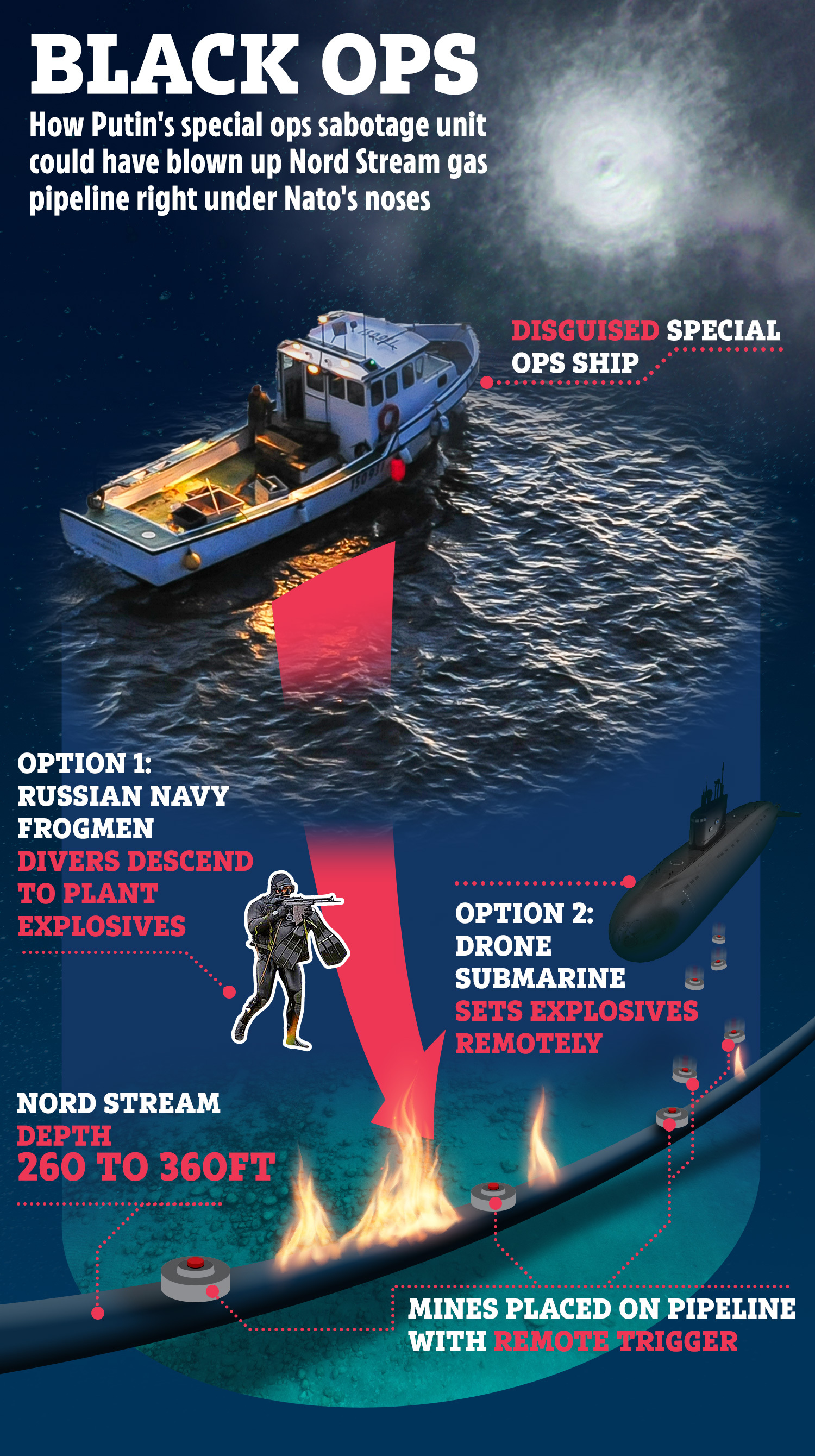 High up on Putin‘s target list could be two pipelines supplying Britain with vital oil from Norway.

Britain’s largest oil and gas fields, which are fixed with dozens of rigs and pipelines and sit close to Norwegian waters and could also be targeted.

Putin’s frogmen could also cut undersea cables carrying sensitive financial information and internet across the Atlantic, sparking an annihilating market crash, according to one US Navy sub warfare expert. 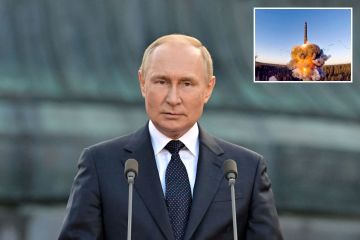 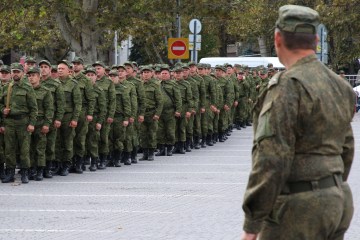 Meanwhile, Professor Damien Erns from the University of Liege in Belgium said Europe faced a “terrible recession” if any of its critical infrastructure were struck, adding protection systems are woefully unfit for purpose.

“Our infrastructure is not very well protected and it is extremely difficult to secure them over thousands of kilometres,” he said.

“If gas supplies from Norway to Europe were cut off, we would see a terrible recession. We would not even be able to heat ourselves and produce electricity.

“The fears are very serious and well-founded. Europe has no more room for manoeuvre and we cannot exclude that things will deteriorate very significantly in the coming months.”

“It’s all part of the Russian style of political warfare,” he said.

It comes amid fears the Nord Stream gas line may have been damaged beyond repair could left crippled indefinitely after it was torn open by a series of explosions.

German officials reportedly believe the project – estimated to be worth around £35billion – may never be fully operational again.

It is feared the key gas network could have been sabotaged by Russia as tensions continue to rage with Europe over the war in Ukraine.

Gas has not been flowing in recent weeks – and it is unclear at this stage how big an impact this will have on the European energy markets.

Prices had already spiked by up to 12 per cent following the apparent sabotage, deepening fears the continent is facing a cold and bleak winter.

German security services reportedly believe the damage has left the pipeline “forever unusable” – with three of four tubes so severely damaged they are now beyond repair, reports Tagesspiegel.

The paper reports the size of the holes in the pipes is sending large amounts of corrosive salt water flowing inside – further damaging them.

German government officials believe the complexity and scale of the attack could have only been carried out by a “state actor”.

And the current theory is that Russia was behind it, even though “the motive is unclear”. 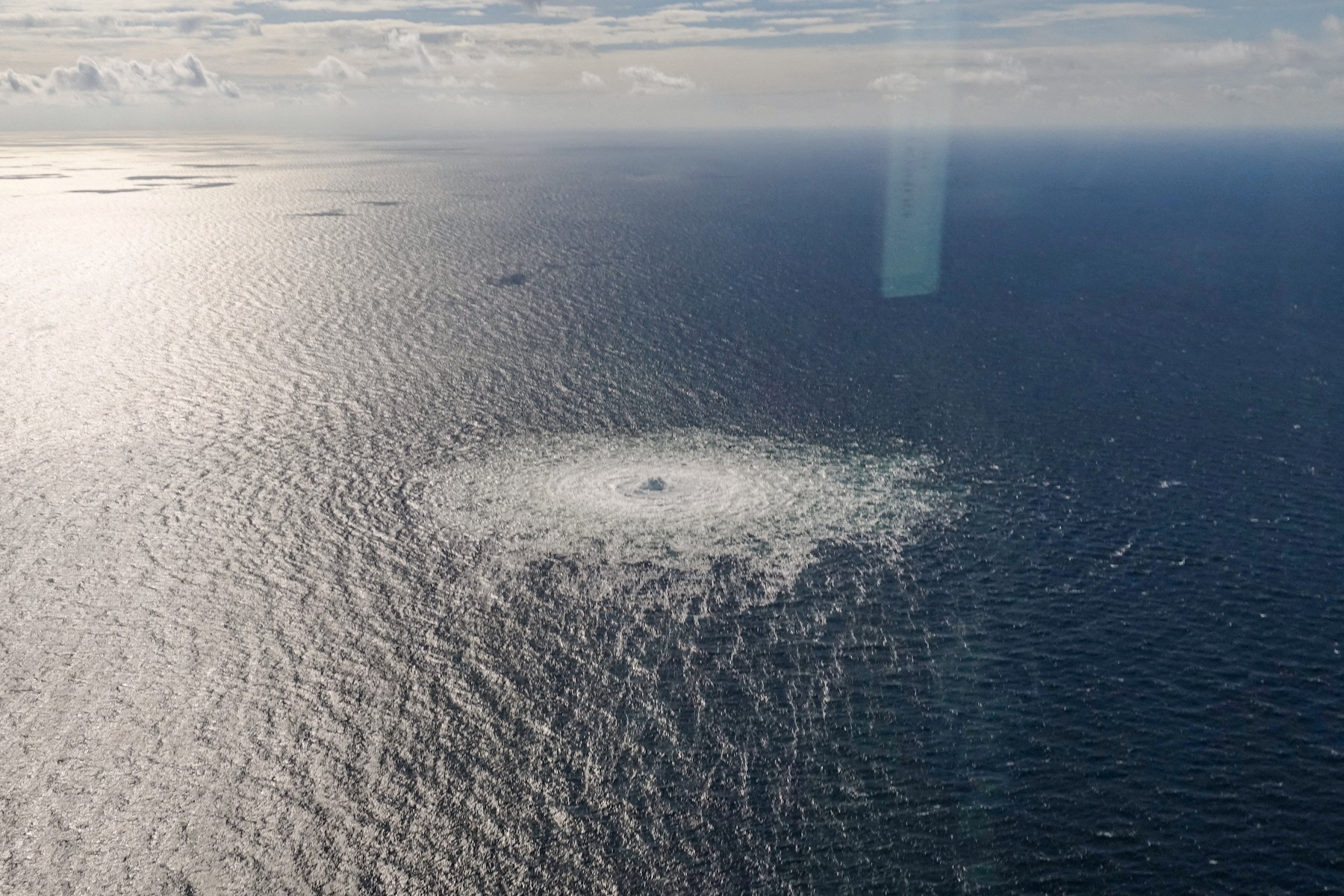 Gas leak at Nord Stream 2 as seen from the Danish F-16 interceptorCredit: Reuters 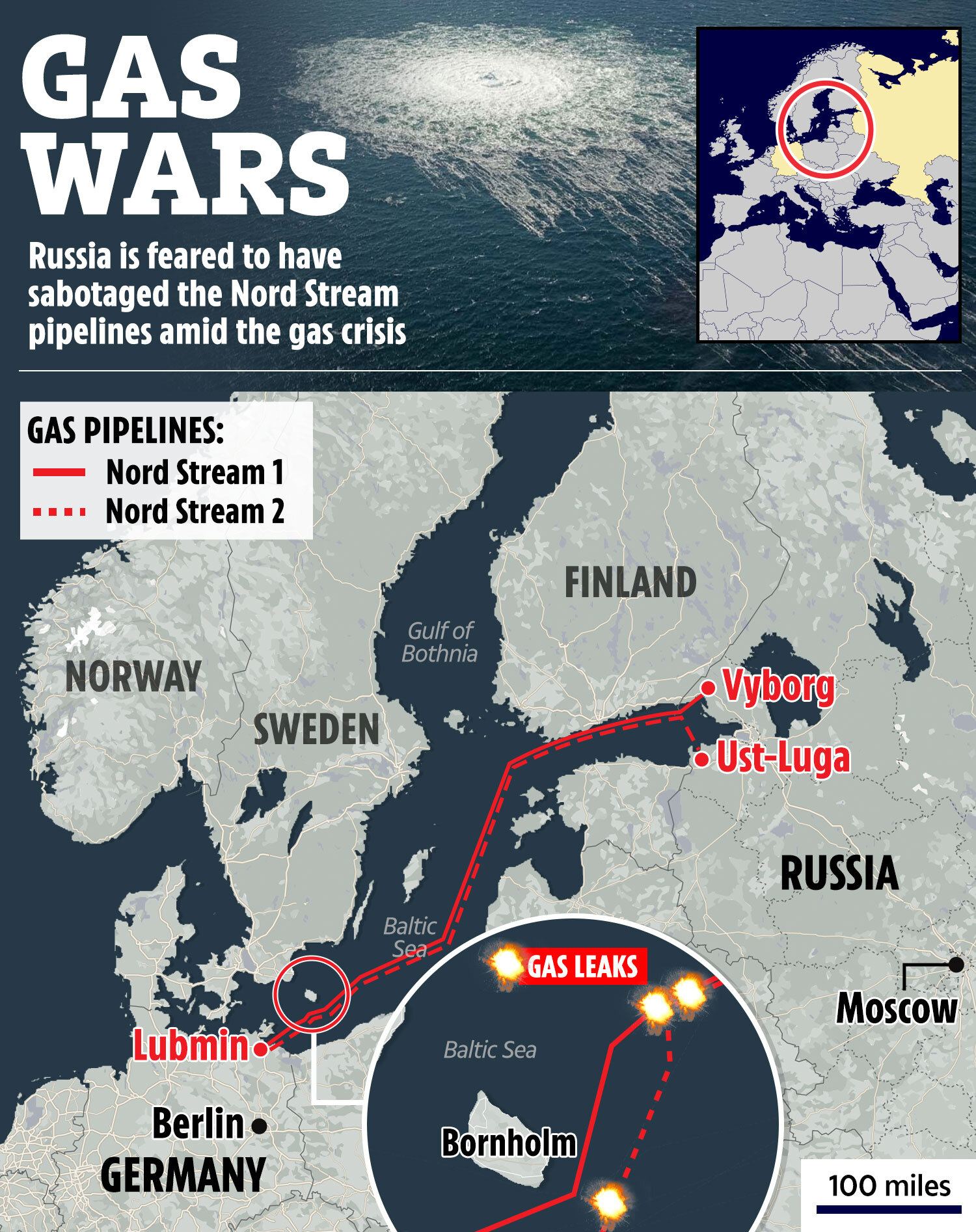 European authorities are now desperately trying to piece together what exactly happened in the run up to the blasts just off the coast of Danish island Bornholm.

Nord Stream 2’s single undamaged tube is now theoretically the only one which can now deliver gas – but the pipeline has not been operational for some time.

Massive leaks in the pipeline have left parts of the Baltic roiling with bubbles as residual gas leaks into the sea.

Two underwater explosions were detected on Monday alongside a mini earthquake.

Ukraine and Poland have pointed the finger at Moscow – while other European nations have stopped short of attributing blame.

Putin has been previously accused of weaponising the energy crisis in a bid to pile pressure on the West.

Russia has denied the allegations, calling them “predictable and stupid”.

“Typically normal leaks due to corrosion start small and build up over time.

“Therefore such a sudden large leak can only have come from a sudden blow cutting the pipe.”

Professor Michael Clarke, a security and defence analyst, told Sky News: “This is not some casual terrorist act, it has to be a government.

“The only government who could really gain from that, in a peculiar way, is Russia – none of the European governments would want to do it.”

He added: “Privately, everyone is convinced this is a Kremlin-inspired piece of sabotage.

“This is a strategic own goal because although it increases the sense of isolation that there will be no Russian gas for Europe this winter, it actually destroys Russia’s credibility completely with European customers for the next couple of generations.”

Prof Clarke explained the Russians would want to “create insecurity” and warned there “may be more of this”.

“It opens up a new front in the war. It means the Ukrainian war is now going to the Baltic,” he warned.

If gas supplies from Norway to Europe were cut off, we would see a terrible recession. We would not even be able to heat ourselves and produce electricity

Europe is already braced for a bleak winter as gas becomes a key pawn in Putin’s clash on the West.

Rolling blackouts, four day weeks, and normal people being unable to afford to heat their homes are just some of the consequences feared to sweep across the continent as temperatures plunge.

Gas prices were already high before the Ukraine war as demand soared after the lifting of Covid restrictions.

But prices skyrocketed after the invasion as Russia is one of the world’s biggest producers.

Only a tiny fraction of Britain’s gas comes directly from Russia.

But the UK relies more on gas for generating electricity than European neighbours because it has less nuclear and renewable energy.

Even the abundant North Sea gas is sold to the UK based on international market prices. 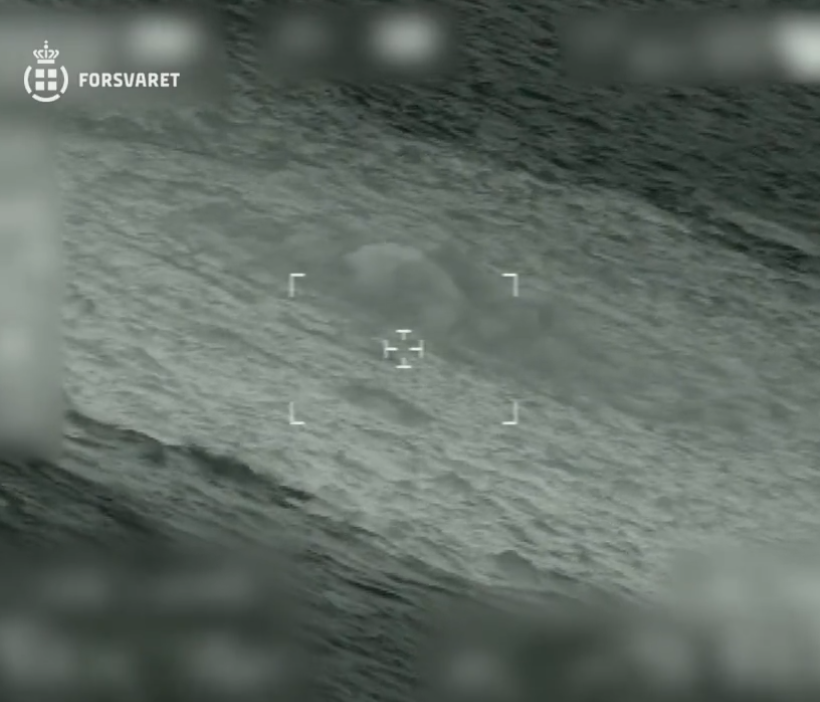 Footage from a helicopter shows the sea bubbling above the Nord Stream pipelinesCredit: FORSVARET