IT HAS been wonderful to be at Wembley this weekend with fans in the stadium making it the spectacle we all love.

Brentford’s promotion to the Premier League on Saturday and Blackpool’s to the Championship yesterday generated emotional scenes in the stands. 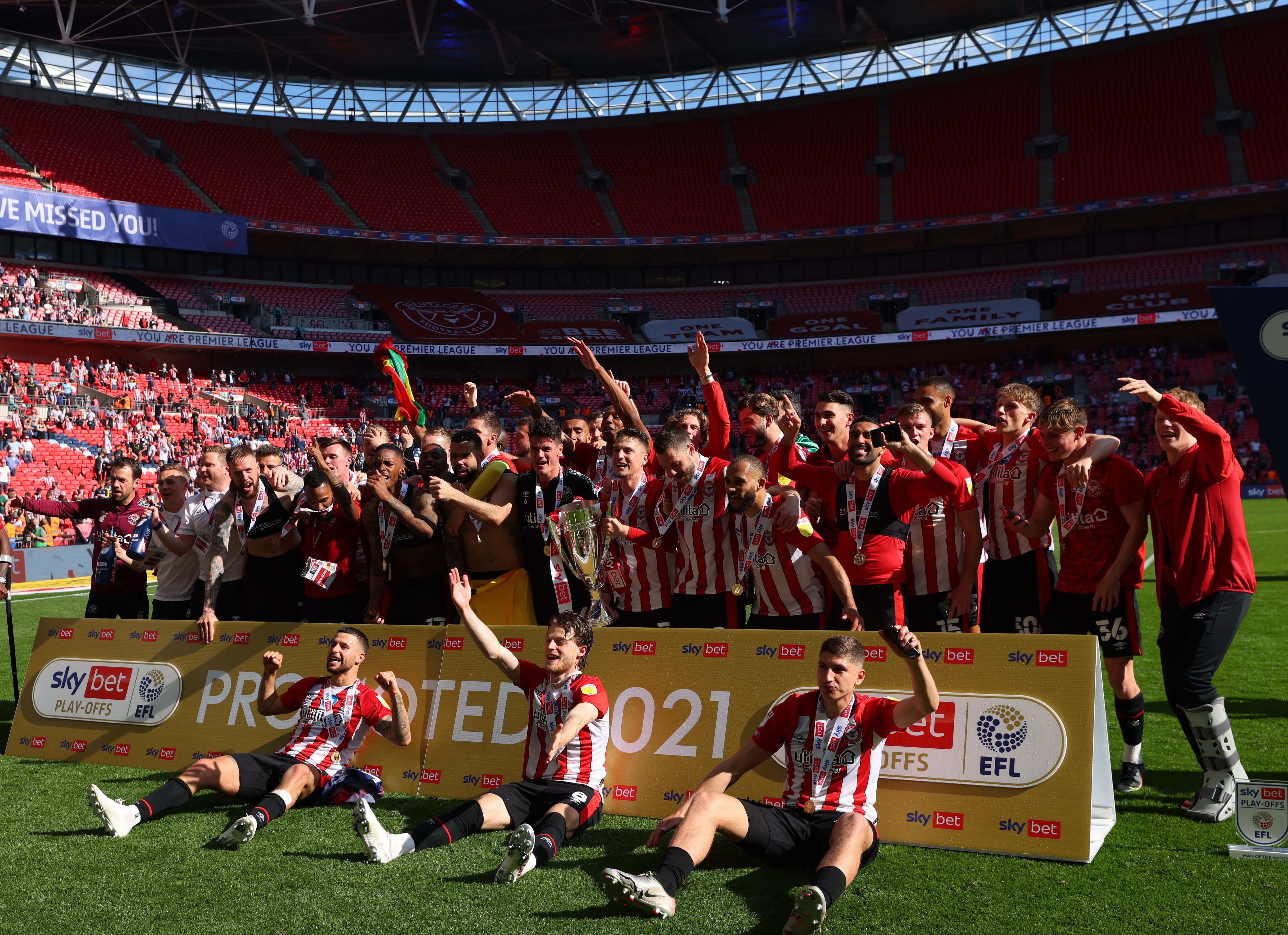 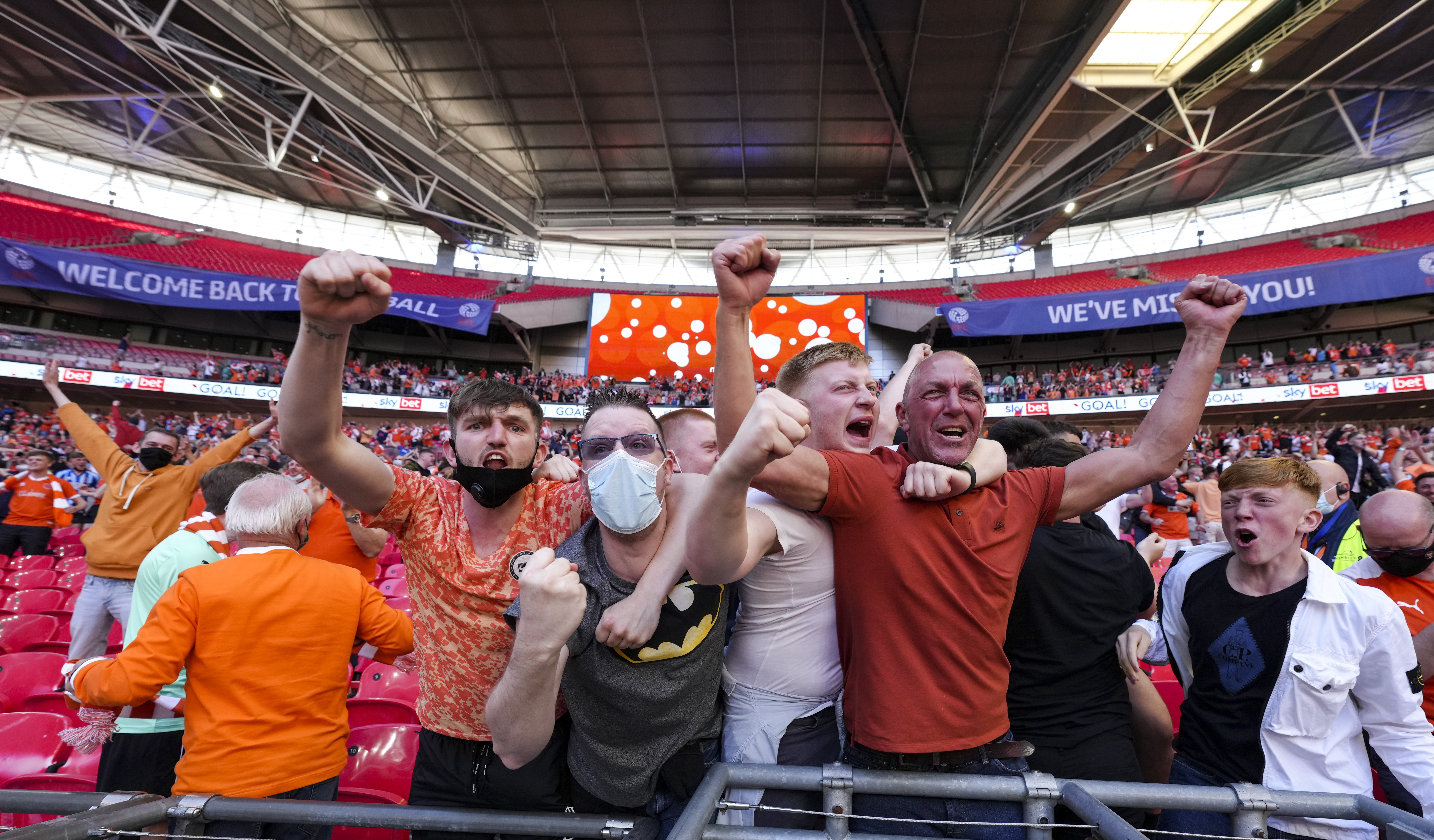 Blackpool fans celebrate their equaliser in their play-off final win over LincolnCredit: Rex

But although it was great to see almost 12,000 under the Arch on Saturday and another 10,000 for the League One final, I could not help but get cross at the contempt shown to the EFL and its clubs by the powers that be.

Why was it OK for 20,000 fans to attend the FA Cup final between Chelsea and Leicester?

And why would it have been OK for another 20,000 supporters to flock to the Champions League final between Manchester City and Chelsea had it been held at our national stadium?

But Brentford v Swansea, Lincoln v Blackpool and today’s League Two final between Newport County and Morecambe were only allowed around HALF that number?

Is there some scientific evidence that I am missing that suggests fans of lower-league clubs are more likely to spread Covid-19 than ones who supports a Premier League team?

It made absolutely no sense and all six play-off finalists were fuming with the decision to cap the crowds so much in comparison.

The reason given by the government is because the EFL play-offs were not selected for its “Events Research Programme” – which is designed to test larger crowds. Why not? 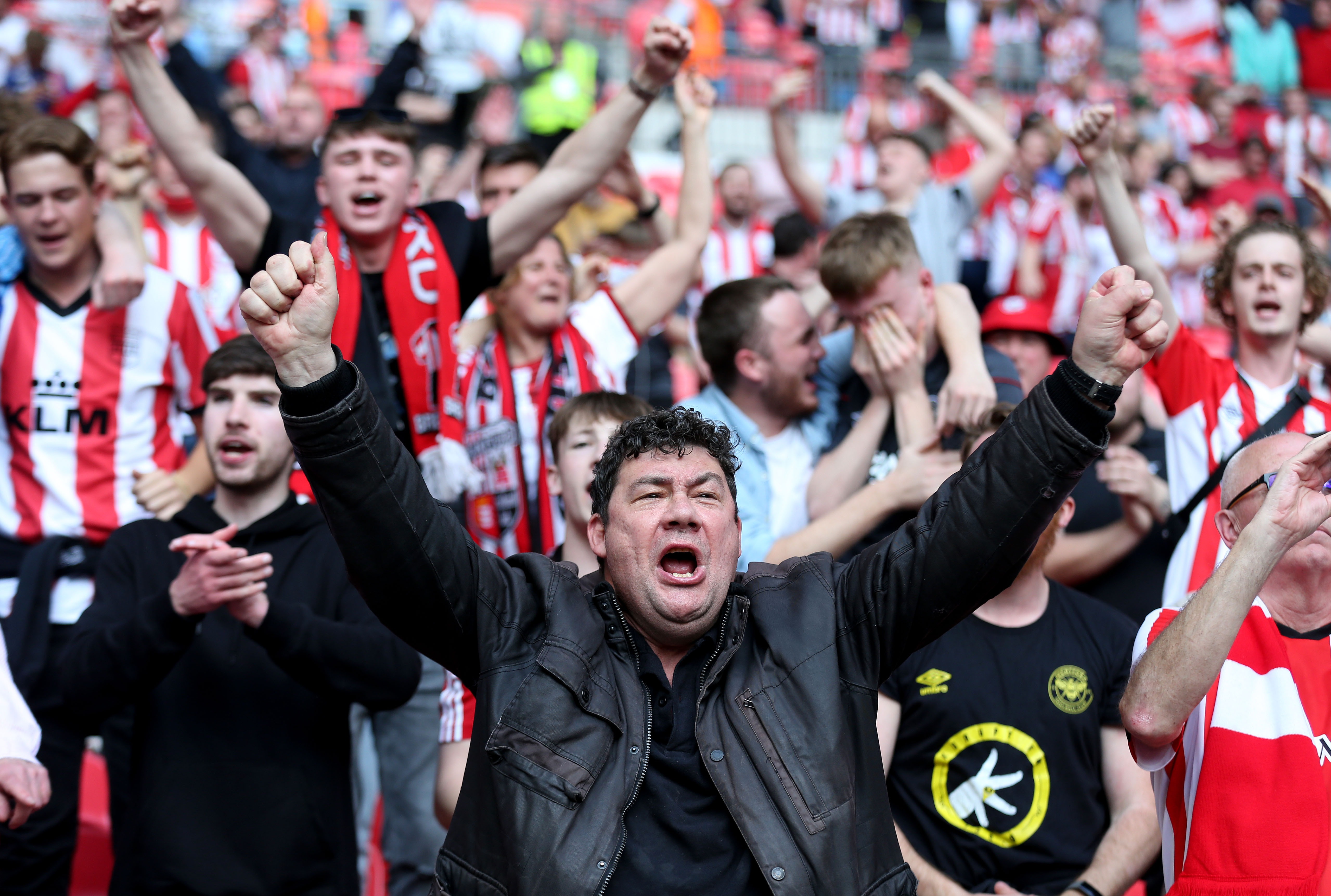 How convenient only finals involving Premier League sides were selected – like there isn’t a world outside the top division.

Some weeks ago politicians across all parties were united against the European Super League – and through fan pressure it was booted into Row Z.

It would have been bad for English football, said several senior politicians in government – who also believed, rightly, it would harm the grassroots of our game.

If these people cared about the world outside the Premier League bubble, they would have allowed more Brentford and Blackpool fans to enjoy their clubs’ promotions.

Has it not been bad enough that the teams outside the Premier League have been far worse-hit financially by the pandemic with no fans for the last year?

Has it not been bad enough that teams outside the Premier League have been far worse-hit financially by the pandemic with no fans for the last year?”

If people in high places in Westminster are serious about sorting out football, they should get behind the EFL’s call for a “financial reset” to the game with a fairer distribution of Premier League TV money filtering down the divisions – rather than just paying lip service.

But judging by the decision to limit EFL fans – in comparison to the Premier League clubs for their finals – it doesn’t inspire much confidence.

Saturday’s Championship final was allowed an extra 2,000 capacity as part of a trial of a new NHS app.

The extra Brentford and Swansea fans were required to download it to their phones to test the functionality and use in an event setting.

Each supporter was required to show the app to ground staff on entry with the authorities wanting to test how it would impact fan entry time and crowd flow.

It is clear that this is with a view to fans in future showing proof of having been vaccinated.

Although that has not been ruled in or out by the government, you can see that this might be the only way the football industry will be allowed to welcome fans back in greater numbers – at least, in the short term.

Vaccination passports have been a controversial subject in recent months but the football industry, especially the EFL and non-league, has suffered greatly over the past year.

The very future of clubs depends on fans being allowed back into stadiums and, to avoid another year of football being played behind closed doors, asking fans to prove they have been vaccinated might be a price worth paying.

The EFL has been encouraged by its discussions with the government about fans being allowed back properly from June 21. 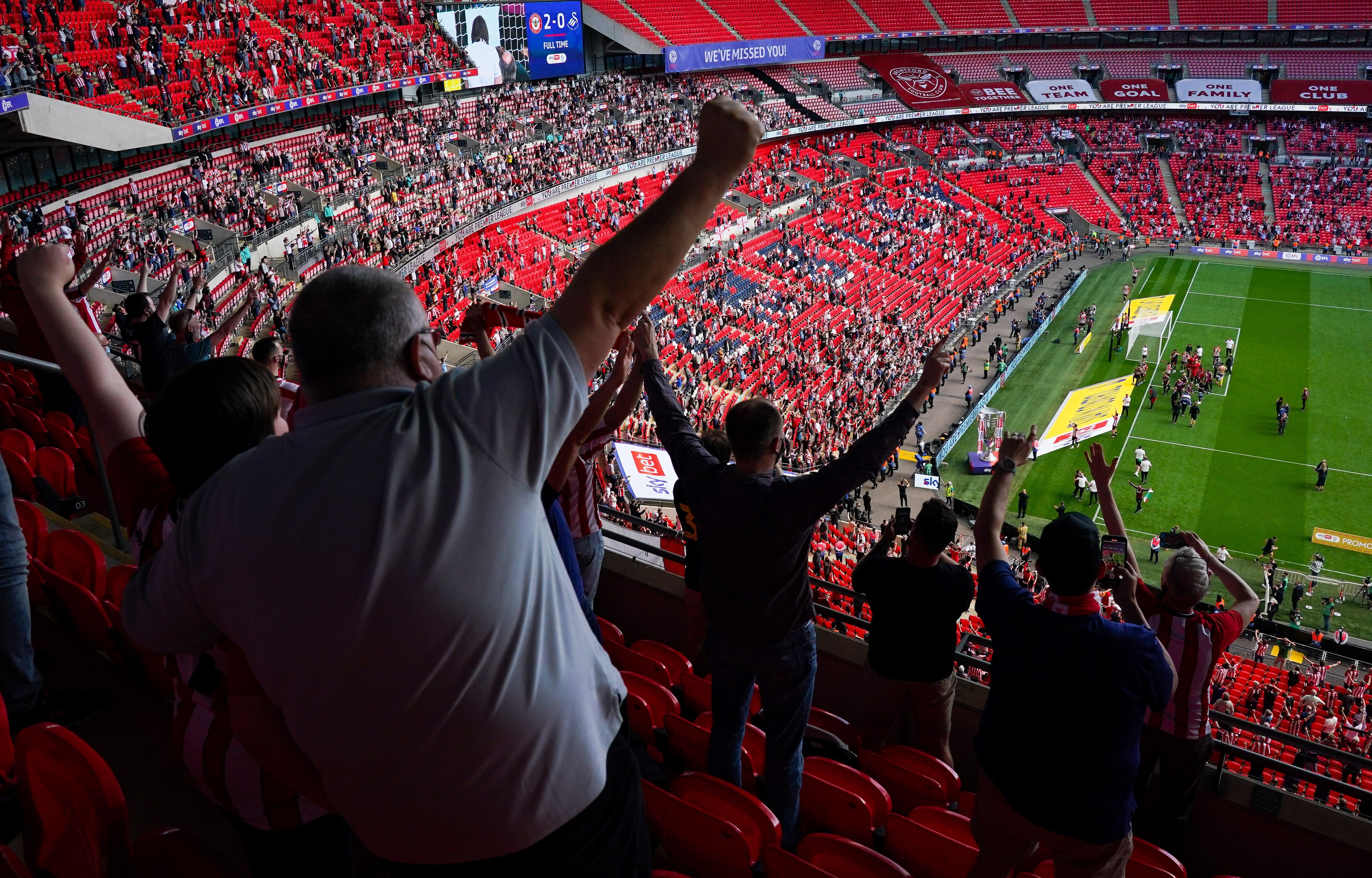 But, with concerns about the Indian variant and other mutations, the League has done some “scenario planning”.

And much of it surrounds allowing clubs to continue to stream games for those who cannot attend.

There may still be a phased return of fans before it reaches previous norms and of course local lockdowns may still be introduced, which would impact clubs in those areas.

EFL chiefs have been delighted by the uptake on streaming this season – which has proved a lifeblood for many clubs.

More than £42MILLION was generated from streaming across all 72 clubs.

It is hoped that Uefa will show flexibility in continuing to relax it rules in allowing clubs to stream and broadcast Saturday 3pm kick-offs.

But hopefully all this will be superseded by the success of the UK’s vaccination rollout.

And don’t forget the EFL and its clubs have assisted in this effort by either allowing its facilities to be used to give people the jab or helping with its messaging.

Football continues to be right at the centre of our communities – and the industry, especially the EFL and non-league, needs to be looked after going forward.

TALKSPORT presenter and lifelong Brentford fan Natalie Sawyer and her dad Brian enjoying a highly-emotional hug at Wembley as their club won promotion was a touching sight from the weekend.

Natalie said her dad had always dreamt about the Bees reaching the Premier League but never thought he would see it happen.

And after being so scarred by nine play-off defeats, finally getting the job done brought about emotions that every football fan will understand.

This type of scene gets played out at every play-off final – tears of joy and happiness for the winners and of despair and hurt for the losers.

Football is one of the most powerful things that bonds us all – and isn’t it great that fans are back?

Roll on the Euros and next season when we all go through the rollercoaster of emotions once again.

SWANSEA are a great club but have been badly let down by their American owners.

I am struggling to think of anything positive Jason Levien and Steve Kaplan have done since taking over five years ago.

In that time they have managed to get the club relegated, stripped the squad of its playing assets without replacing them properly, have hardly put any money in and now face a fourth season in the Championship. 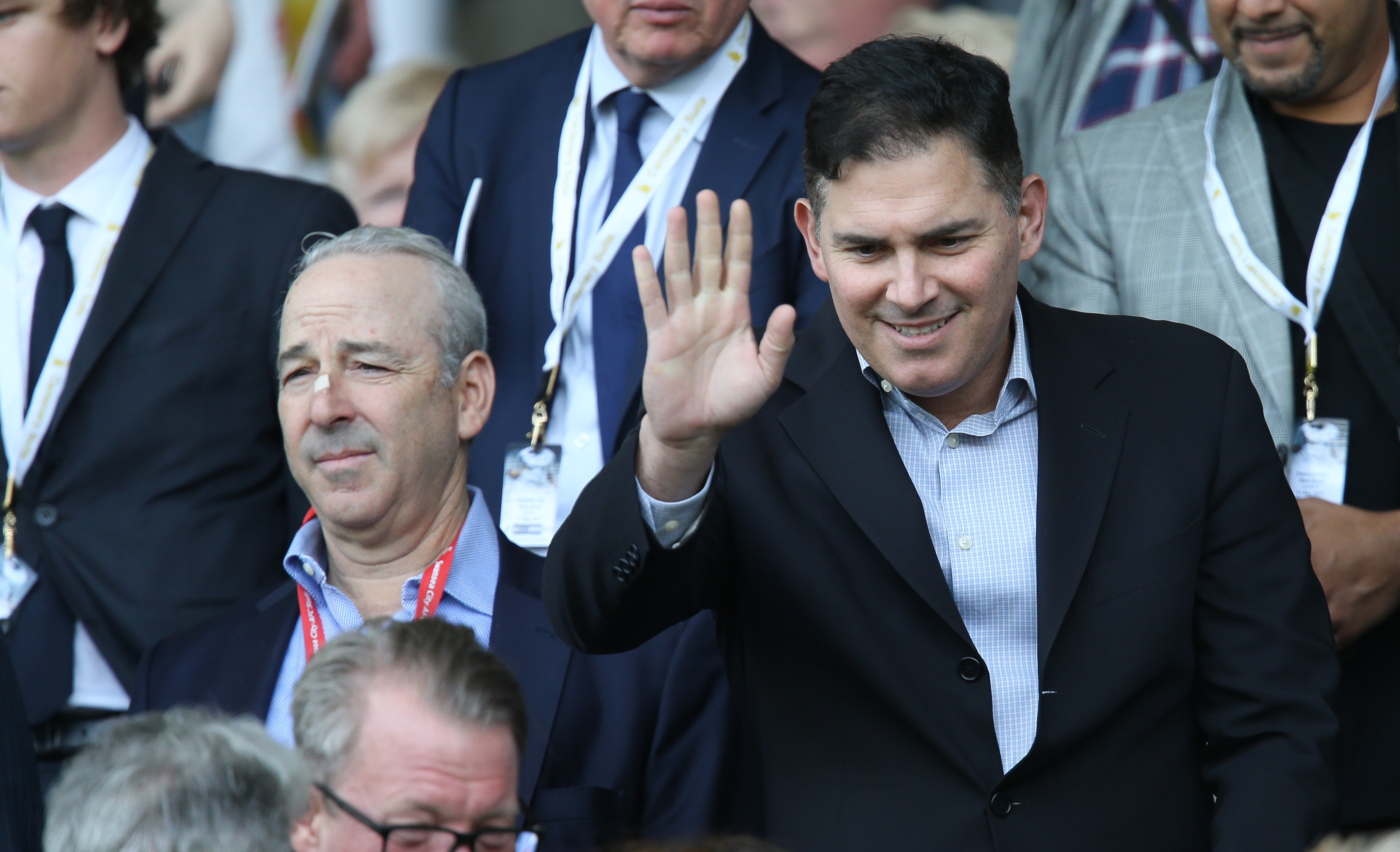 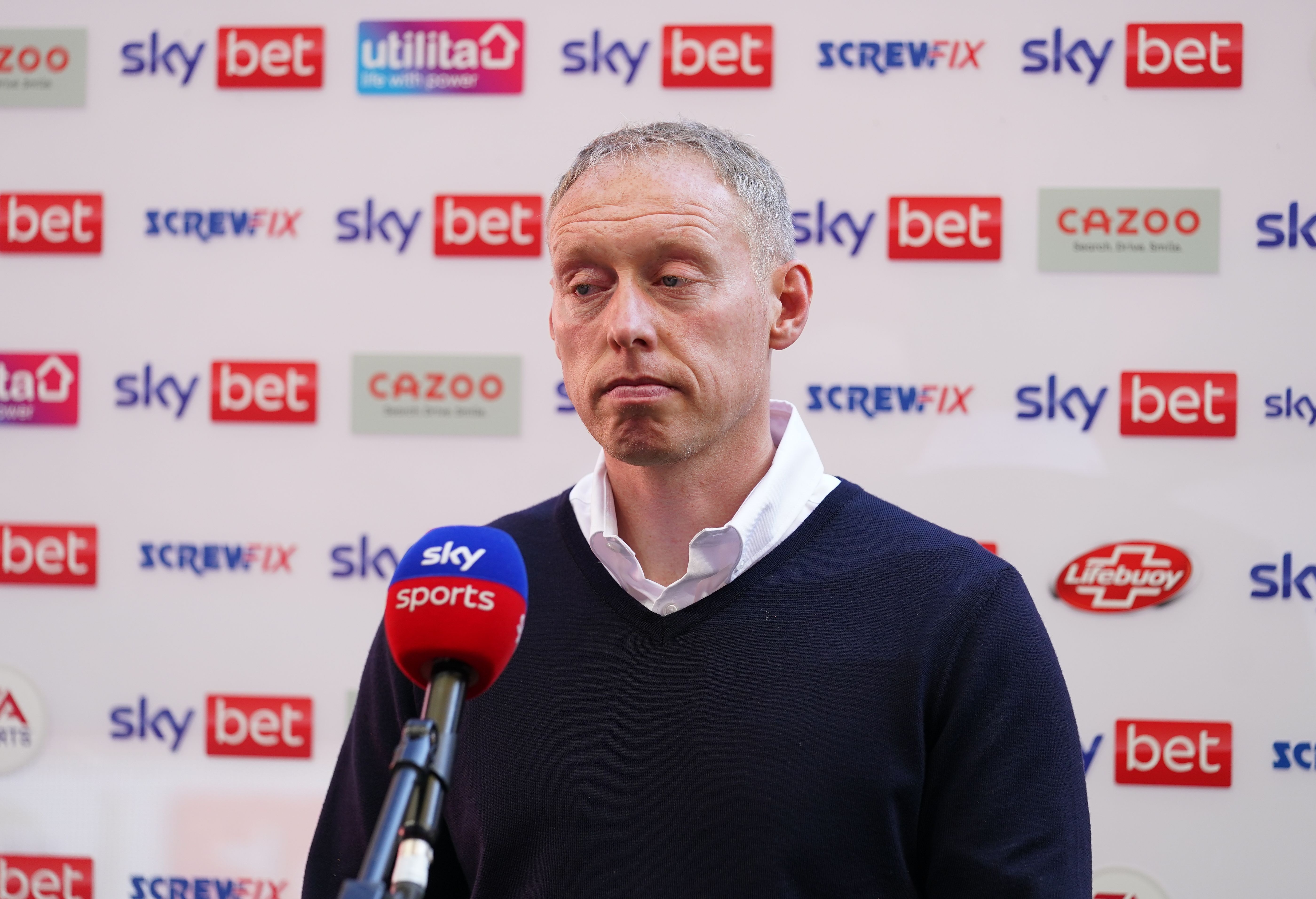 Swansea manager Steve Cooper’s future is now up in the airCredit: Rex

Don’t forget it was they who brought in the disastrous former US coach Bob Bradley – seemingly because he was American!

The bloke was like a drill sergeant in the US Marines and had zero understanding of British football.

But he was appointed by two guys who clearly have no understanding of football full-stop.

When the Swans were promoted they had a clear identity under Brendan Rodgers and Michael Laudrup took it to the next level by leading the club into Europe.

But under these two owners, they lost their Swansea Way, everything has become muddled and it was only because of the brilliant management of Steve Cooper that they have made back-to-back play-offs.

If they lose Cooper this summer, I fear for Swansea. This is going to be a big few months for the Welsh club.

Brentford fans celebrate outside stadium after promotion to the Premier League