Designers Eduard Eremchuk and Katy Pititskaya have created a cafe in Voronezh, Russia, that embodies “the essence of a doughnut” through delicious-looking velvety walls and squidgy seeming furniture.

Cafe Krujok, named after a round doughnut, is located in the centre of the city of Voronezh in southwest Russia and specialises in breakfasts and coffee. 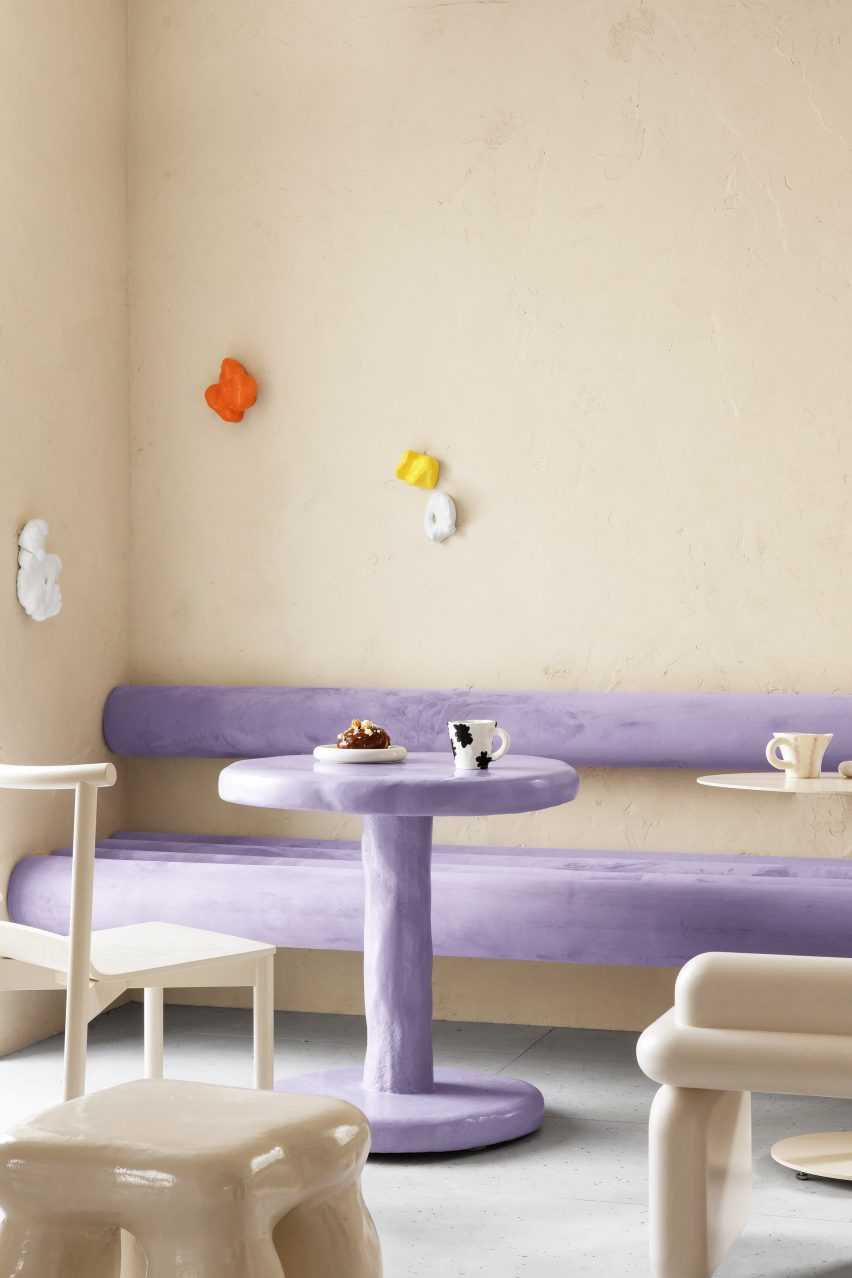 Cafe Krujok is designed to look like a deconstructed doughnut

In keeping with the theme, Eremchuk and Pititskaya designed the space to make patrons feel as if they had stepped into a fantasy world of baked goods.

“We were inspired by airy shapes of the doughnuts, melting glaze, and cream,” said the duo, who decorated the entire cafe to look like a “hyperreal pastry”. 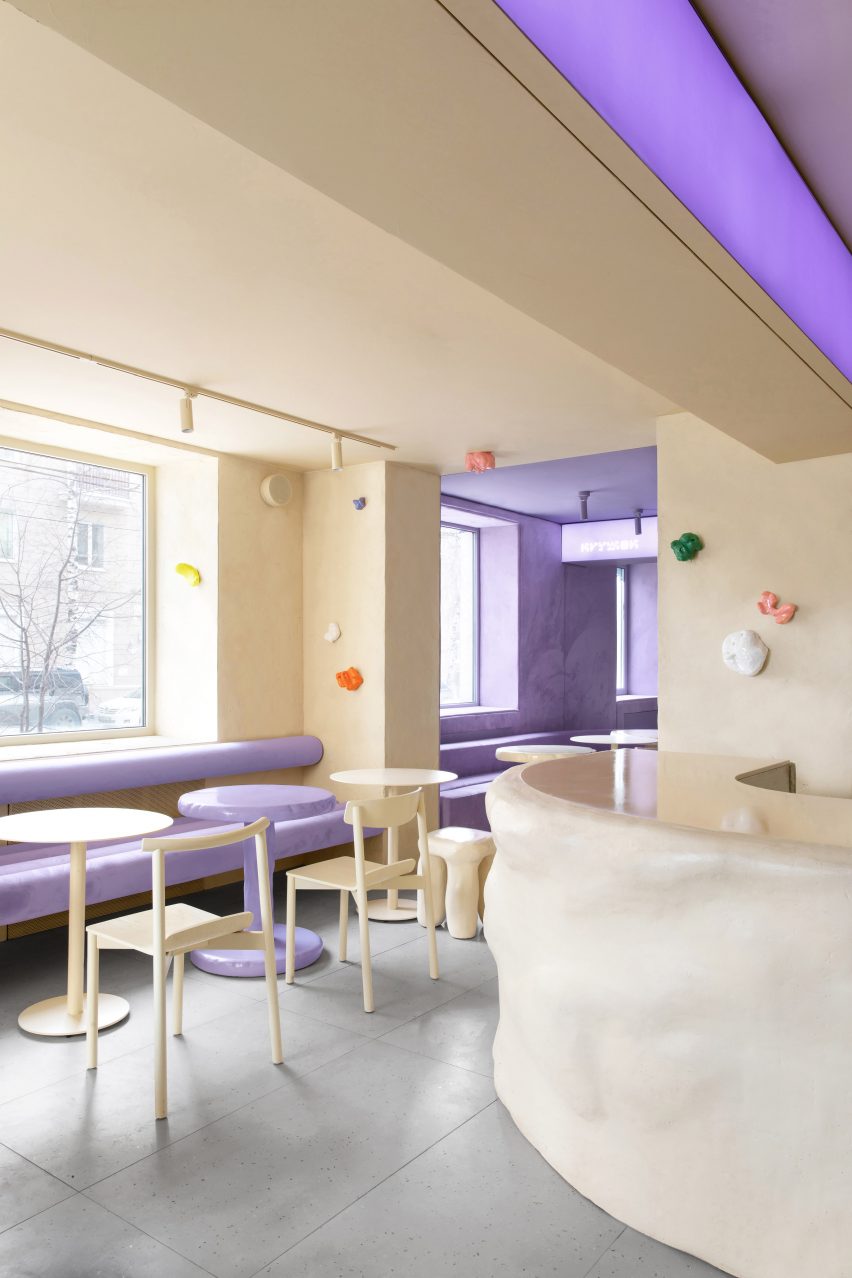 Wall art by Elena Minaev was chosen because it resembles popcorn

Cafe Krujok is divided into two spaces. Near the entrance, the walls and furniture are a creamy colour and some of the chairs and tables are sculpted to look as though they have been squidged and moulded like clay before being sealed with a glossy finish.

“You start your journey as if you are inside of a doughnut,” said Eremchuk and Pititskaya. “Crumpled glossy furniture, beige and sand-coloured walls and furniture refer to different forms of dough.” 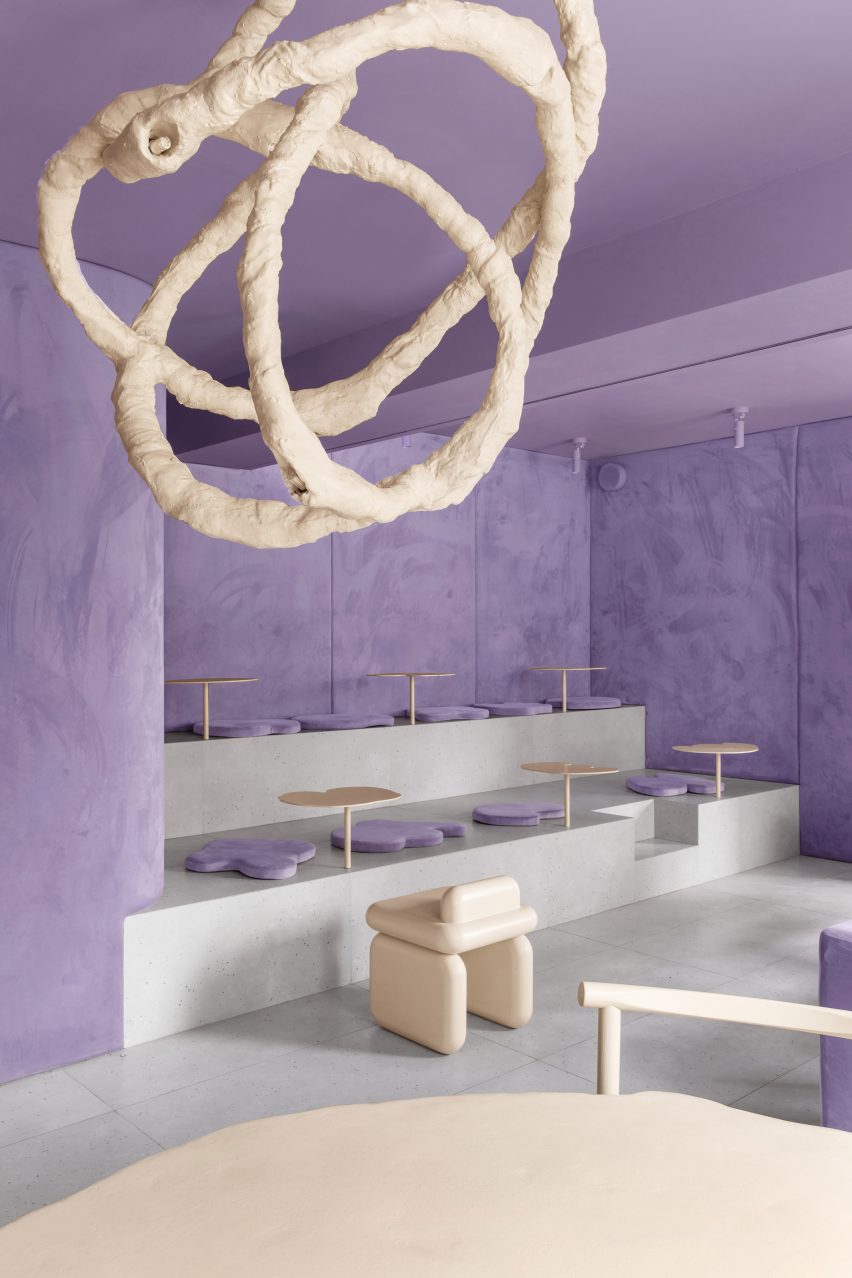 A chandelier looks like a tangle of pastry dough

The walls are decorated with multicoloured sculptures by Russian artist Elena Minaev that are intended to recall glossy puffs of popcorn.

“They are there not by accident,” explained the designers. “Pastry cooks decorate doughnuts with caramelized popcorn – this is an important element of the dessert.” 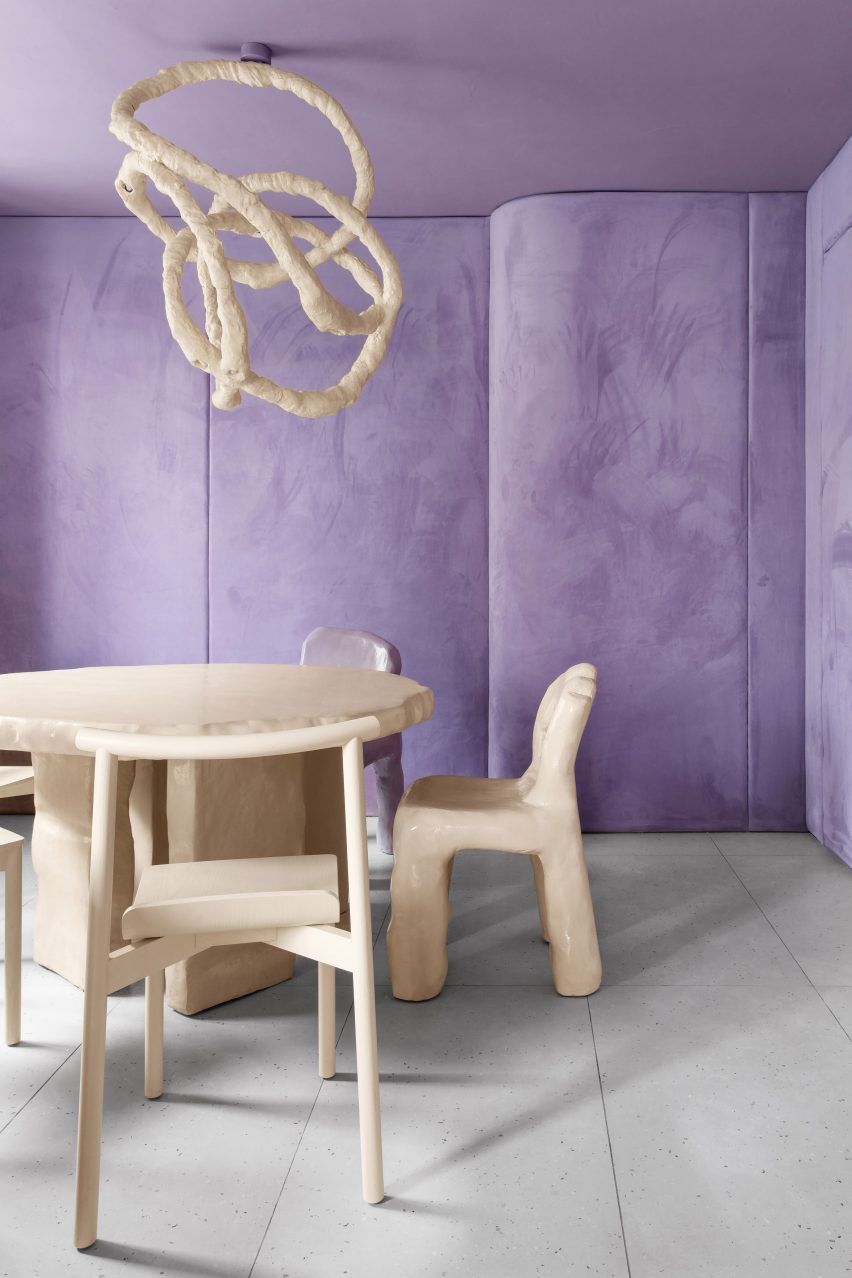 In the second space, the designers explored the visuals of a doughnut’s glaze. Walls are covered in plump panels upholstered with berry coloured purple velvet that appears soft to the touch.

Puddle-shaped cushions in the same fabric perch on stepped concrete seating, between irregular-shaped tables that look like 2D blobs of cream or sprinkles. 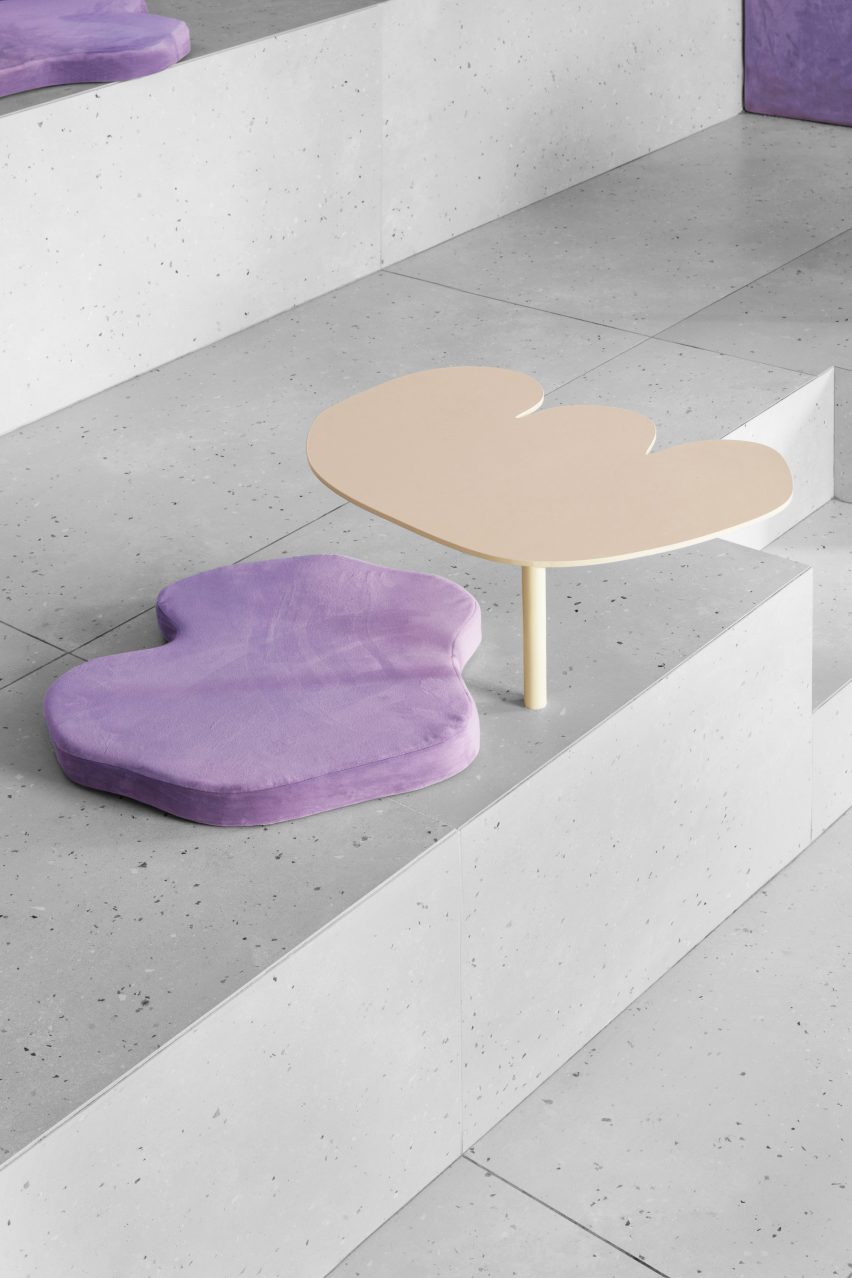 Cushions that look like puddles of icing on concrete stepped seating

A podium-style booth is sculpted to appear as though moulded from soft, organic material. The large chandelier that twists and curves over the space appears as though a baker has extruded a giant tangle of choux pastry.

“The goal was to create an ambience so each guest could dream his own dream in the world of pastry,” said Eremchuk and Pititskaya.

“Once you are inside, a new reality absorbs you. The pastry is everywhere, it looks and even feels like the cafe is made of dough.” 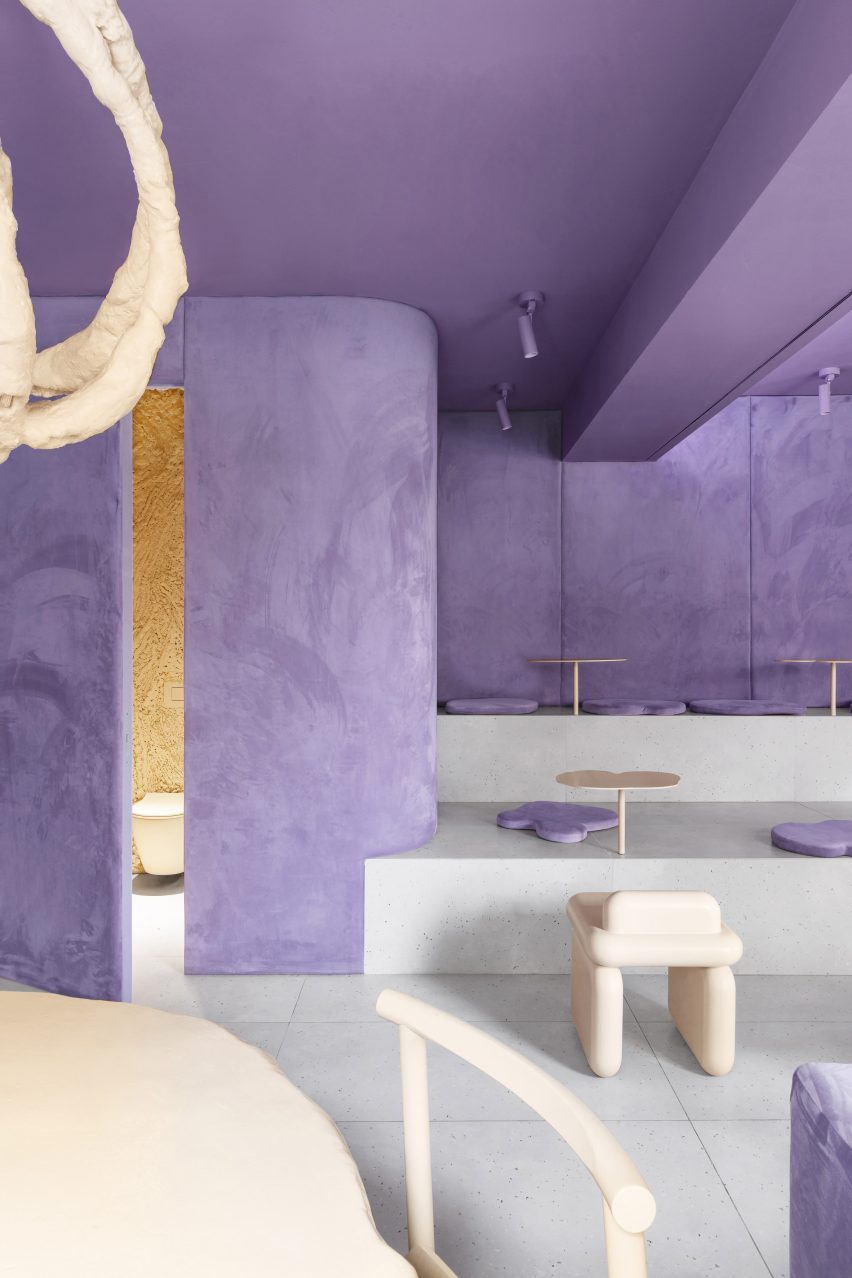 Even the bathroom is in keeping with the doughnut theme

Even Cafe Krujok’s restroom is in keeping with the theme. After the exploration of the dough and the glaze, the bathroom represents a pastry’s cream-filled centre.

Every surface is monochromatic beige with textured walls and ceilings that look as though someone has taken a can of spray cream to them.

“When you get to the restroom, it feels like the creamy-sweet filling of the pastry is melting around you,” said the design duo.

“The team achieved this effect by using a construction foam that was painted in beige and covered with a transparent epoxy resin on top.” 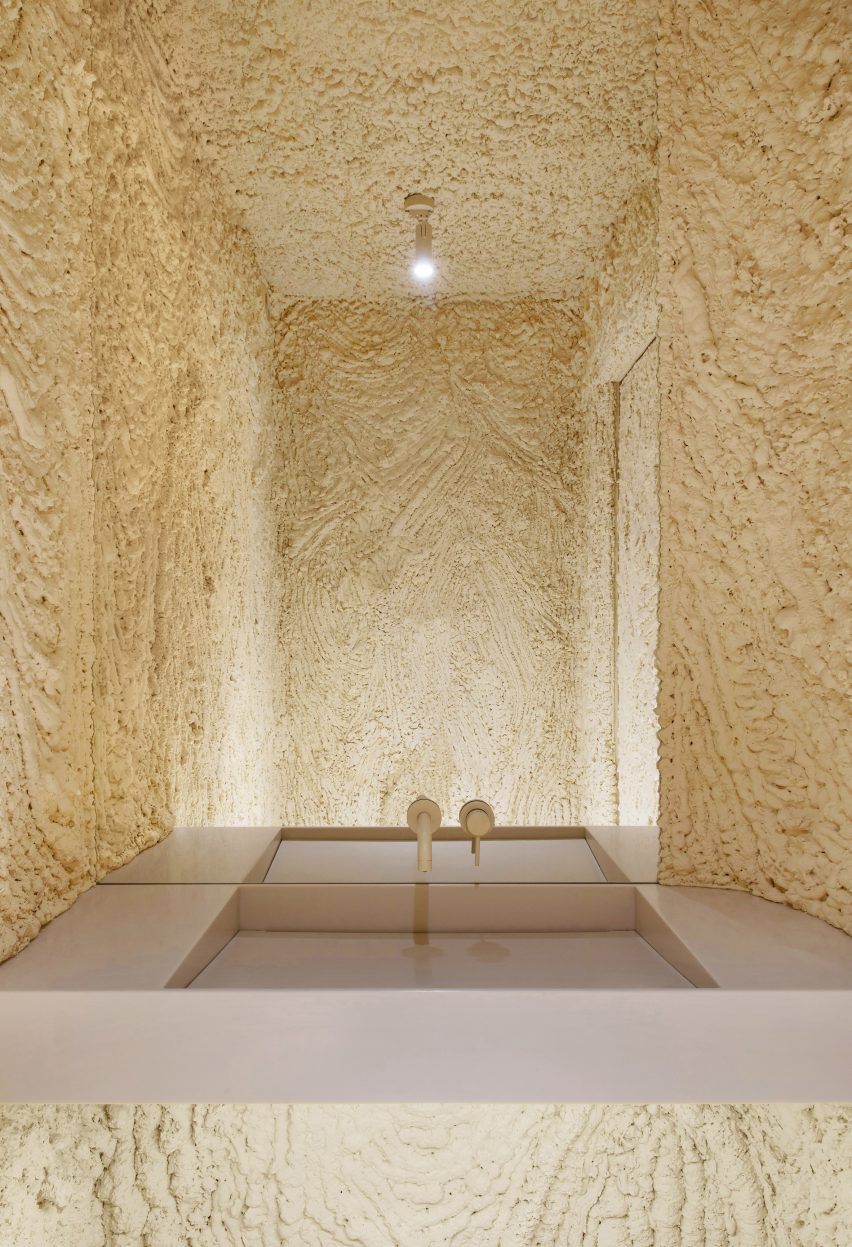 Construction foam has been used to look like whipped cream

Moscow-based architect and interior designer Eduard Eremchuk specialises in fantastical interiors. He has previously created a clothes shop with bright pink furry walls, a florist that looks like a sci-fi spaceship and a cafe with a bathroom covered in cow-print tiles.

More baked goods-themed interiors include this tiny Japanese bakery decorated in the colours of the bread that it sells.

Photography is by Inna Kablukova.