CRISTIANO RONALDO somehow avoided a red card after kicking the opposition goalkeeper in the neck in a horror challenge.

And to make matters worse for Cagliari, the Juventus forward went on to score a hat-trick and secure a 3-1 win on Sunday night. 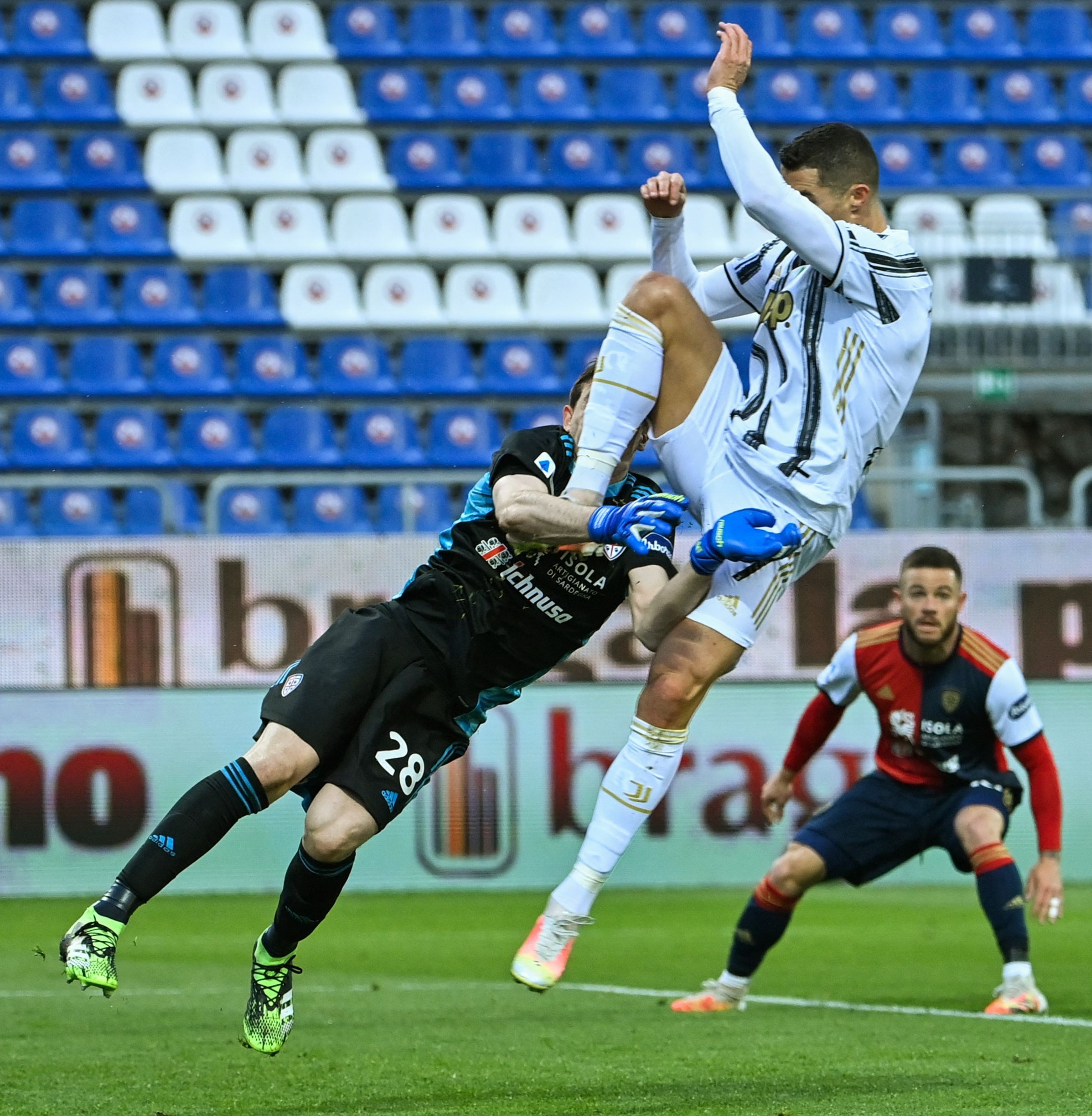 Cristiano Ronaldo escaped without a red card despite this horror challenge on Cagliari goalkeeper Alessio CragnoCredit: AFP or licensors

With Juve leading 1-0 thanks to his bullet header, the game could have changed in the 14th minute when Ronaldo went flying in for a tackle.

But Ronaldo dangerously left his right boot incredibly high and clattered into the face and neck of Cragno.

The stopper stayed down injured and suffered a nasty gash on his chin which required treatment.

Referee Gianpaolo Calvarese showed a yellow card to the 35-year-old five-time Ballon d’Or winner but for some reason did not watch a replay on the VAR monitor as Ronaldo got a lucky escape.

This was a clear example of serious foul play where a player endangers the safety of an opponent – as per Rule 12.3 of the Ifab Laws of the Game.

The ruling says: “Any player who lunges at an opponent in challenging for the ball from the front, from the side or from behind using one or both legs, with excessive force or endangers the safety of an opponent is guilty of serious foul play.”

He told Sky Sport Italia: “I am above all upset that Ronaldo was not sent off, as that incident could’ve changed the game.

“It was dangerous play, it put the safety of our goalkeeper at risk and therefore ought to be punished with a red card. This is what the rulebook states.”

Plenty of fans also vented their anger at the inexplicable decision not to send Ronaldo off.

One fumed: “Juve mafia. Ronaldo starts his wwe career with a yellow for this. CLEAR RED FOR RONALDO.

“He should’ve gotten this red in the 14th minute so it would’ve changed the game massively.”

Another fumed: “This is a red card 10/10 times unless you have ‘Ronaldo’ written on the back of your shirt.”

However, another ex-whistler, Paolo Casarin, stuck by Calvarese’s call with his own personal interpretation of the rules – which seemed to suggest he was taking intent into consideration.

He should have been shown a red card !! Karate kid on the goalkeeper ! But hey it’s Juventus ! Thieves !!

He told Corriere dello Sport: “I was surprised by Cristiano Ronaldo’s entry on Cragno and I went to carefully read the rules to see what they say.

“The contact was absolutely not [worthy of a] red, since there was no vigour and nastiness.”

Ronaldo put the incident behind him to race clear and win a penalty on 25 minutes, with Cragno the man to bring the Portuguese down.

He blasted his penalty in before completing his hat-trick with a left-footed strike just after the half-hour mark.

The Juventus star – who came in for heavy criticism following their Champions League exit to Porto last week – touched the top of his neck in celebration.

It is thought he was pointing to his ear to silence the haters but others interpreted it as him suggesting he only caught Cragno in the neck.

The win for Andrea Pirlo’s side moved them on to 55 points, ten behind Serie A leaders Inter. 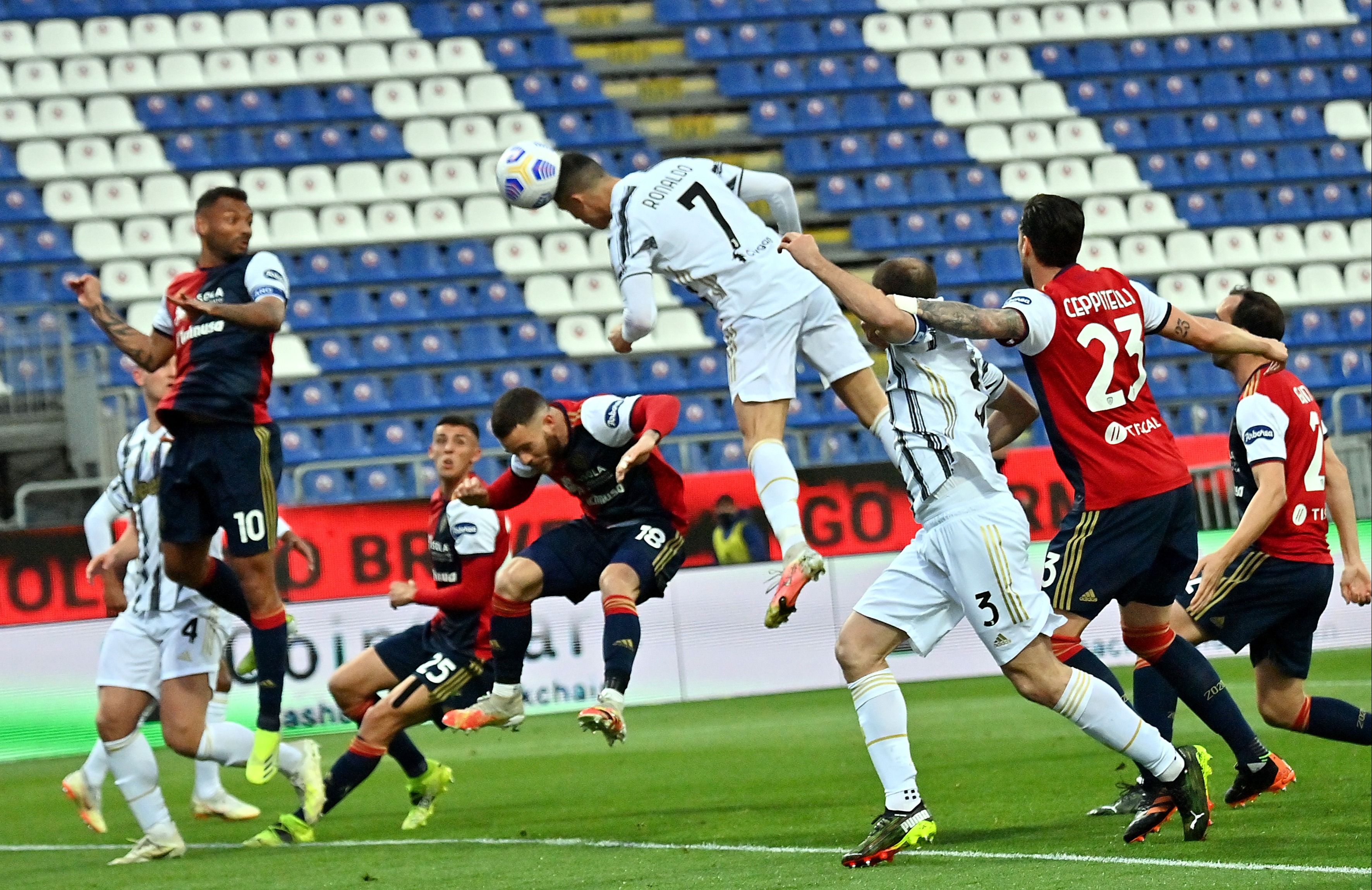 Ronaldo opened the scoring with a bullet header and completed his hat-trick inside 32 minutesCredit: Getty 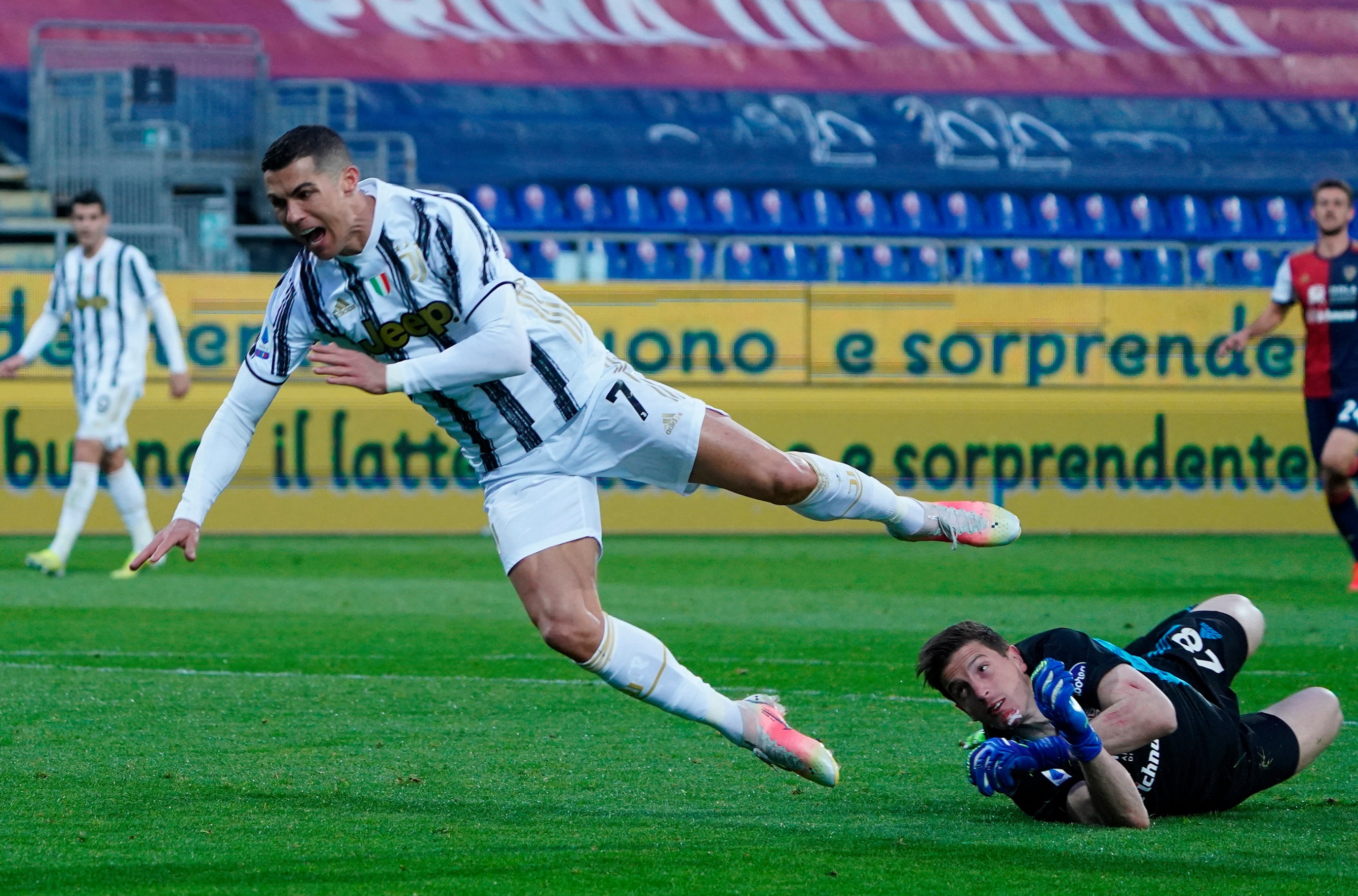 Ronaldo and Cragno clashed again as the goalkeeper brought the Juve forward down for a penaltyCredit: AP:Associated Press