In a major win for all those who have correct opinions about chocolate, Celebrations has finally booted out its worst treat… sort of.

Mars is set to do a special trial edition of Celebrations tubs, free of the menace to society that is the Bounty bar.

Yep, finally you’ll be able to get a box of your favourite Christmas delight without having a bunch of chocolate left over to wither.

We all know that the Bounty is the worst part of the Celebrations tub (and if you disagree, you are wrong), but for years we have put up with its presence in amongst the stars of the show – the Maltesers one, the Galaxy caramel, and the Milky Way.

If you’re lucky, you have a partner, friend, or relative who actually likes the coconut monstrosities, and will happily gobble their way to clear the selection for easier access to the good bits.

But us unlucky types have had to put up with leaving the Bounty to last, only to slink back in chocolate desperation, forced to eat the disappointing dregs.

The good news is that Mars will now be doing special No Bounty tubs – exactly what they sound like, tubs of Celebrations but with not a single Bounty lurking inside.

The bad news is that these will not be available in every supermarket. 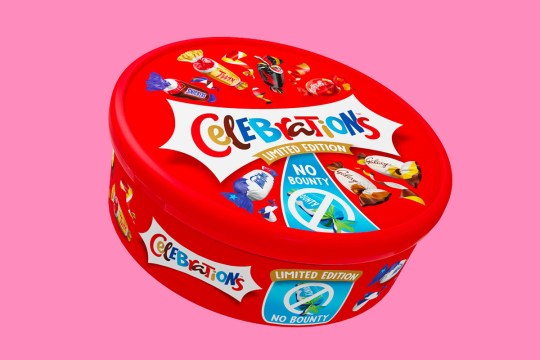 Instead, you’ll only be able to buy No Bounty tubs from select Tesco Christmas Market pop-ups between November 8 and December 18.

Within that period, customers in select stores will be able to exchange tubs of Celebrations bought in-store that day with a No Bounty version, so Mars can suss out once and for all if the Bounty is as hated as it appears.

The trial comes as a survey found that 39% of Brits would support having Bounty bars scrapped from Celebrations.

The poll of 2,000 people revealed that 18% would feel irritated if they opened a Celebrations tub to find only Bounty’s were left, and 58% said this would lead to a family argument.

It also found that 22% of people surveyed like Bounty the least out of all the chocolates in the Celebrations tub, and 28% of us believe that coconut does not belong in a chocolate bar at all.

There are some (wrong) Bounty fans, however – 18% of those surveyed said it’s their favourite item in a Celebrations tub.

If you are a Bounty fan, you’re likely to be older, however – 38% of over-55s say it’s their preferred choc.

Emily Owen, Mars Wrigley’s head of Celebrations festive cheer said: ‘Christmas is the time for giving – but it seems this year, the British public are keen for us to take away… Bounty.

‘Last year, we gave customers the opportunity to return their unwanted Bounty chocolates. Now, off the back of public demand, we’re trialling taking them out of the tub altogether. You don’t know what you’ve got until it’s gone!

‘And to those loyal (and secret) Bounty lovers out there, there’s still a chance they’ll make a return after the trial.’