A GROUP of MAGA rioters were captured on video discussing floor plans and police locations while storming the Capitol – evidence that at least parts of the insurrection were planned.

This is the clip that’s been ripped from my lifestream… I’m ripping it back. It was a kind of autonomous organizing in that it wasn’t well organized. It felt improvised & chaotic more than anything. No indication these people knew each other but were coordinating in the moment. pic.twitter.com/bcgBH4SBIP

The video, which was posted live onto Periscope and resurfaced on Twitter a week later, follows the group as they talk about a door that police have “barricaded” that is “at the top of the stairs.”

A man is heard asking, “What’s the floor plan?”

Another man then discusses the stairway and door routes that the group should follow or avoid, and adds that at the “door to the right, there’s a cop.”

A man with a gas mask on his head then says, “The door is already open,” and, “We need a plan, we need more people, we need to push forward.” 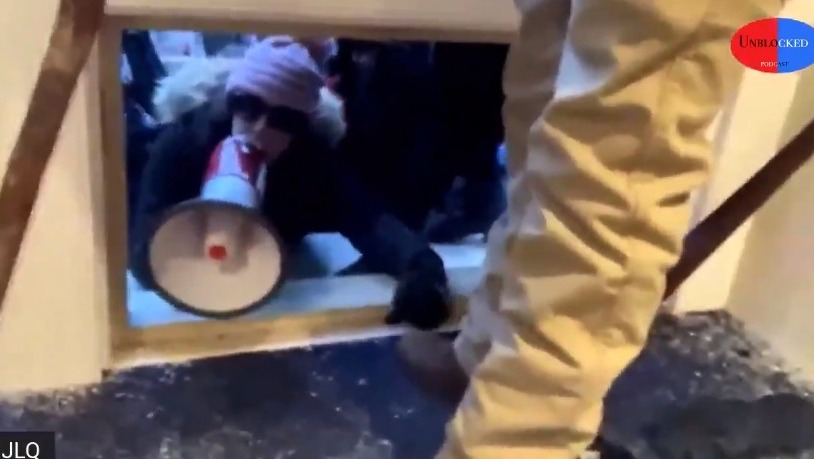 A woman informed the rioters about doors in another roomCredit: Unblocked Podcast

Other members of the group start picking up furniture in the office, as one MAGA fan says, “Take the table, use the table as a shield.”

Some people proceed to pick up a big wooden table and carry it through a door and place it across the top of the staircase as a means of possibly blocking cops.

Many of the group members then reconvene in the office, where a woman with a megaphone announces: “Guys, I’ve been in the other room. There’s another room on the other side of this wall … there’s a glass, which somebody has broken and you can drop down into a room underneath it.”

She adds that there are two doors in the other room and describes where they are. 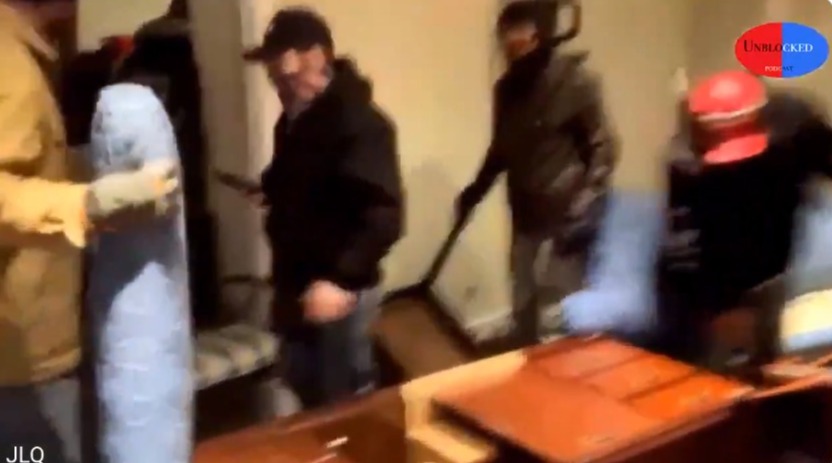 MAGA rioters picked up furniture and placed it in areas to seemingly block copsCredit: Unblocked Podcast

“So people should probably coordinate together, if you’re going to take this building,” she concludes.

The group says they need more people to help further infiltrate the building.

Down the hallway, more insurrectionists occupy other offices and smash the furniture.

At least some of the MAGA rioters had plans of how to storm the CapitolCredit: Getty Images – Getty

One of the rioters wearing a gray sweatshirt appears to take a device that could be a large external hard drive.

Later in the video, some rioters escape through the windows as tear gas spills in.

“They’re shooting,” a rioter says, referring to the cops.

At that point, Quinn stopped recording and fled through the window for his own safety.

On Wednesday, Quinn tweeted that “it was a kind of autonomous organizing in that it wasn’t well organized.”

“It felt improvised & chaotic more than anything,” he continued.

“No indication these people knew each other but were coordinating in the moment.”

The rioters in the video have not yet been identified.

Law enforcement officials are investigating rioters and any links they may have had to Capitol staff or security who could have aided them in breaking in to stop Congress from certifying President-elect Joe Biden’s victory.