AUSTRALIA has been rocked by a 6-magnitude earthquake, forcing people to flee into the street as high-rise buildings started to shake.

The tremors were felt across Victoria, Canberra and even in parts of Sydney, with some properties crumbling in Melbourne, said reports.

Bricks were tossed into the streets of Melbourne after the quake struck on Wednesday morningCredit: Twitter 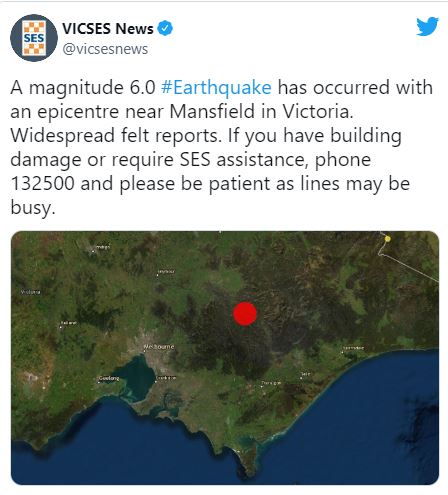 The state emergency service said it was a 6-magnitude quakeCredit: Twitter

A shallow earthquake rattled Australia’s southeast just after 9am Wednesday local time (midnight GMT) and was felt hundreds of kilometres away, including Adelaide and Launceston in Tasmania, reported ABC News.

An earthquake of magnitude 6.0 struck near Melbourne, Geoscience Australia confirmed.

The quake’s epicentre was close to the rural town of Mansfield, about 200km (124 miles) northeast of Melbourne, and struck at a depth of 10km (six miles).

And Australia could be shaken by an even bigger quake, warned an expert.

Adam Pascale, head of the Seismology Research Centre, told ABC: “There is a small likelihood that there could be a larger event but we’ll see as we go.

“The aftershocks are likely already occurring.”

Radio station 3AW posted a picture of rubble on a street in Melbourne which it attributed to the quake, and people in northern parts of the city said on social media they had lost power.

No tsunami threat has been issued to the Australian mainland, islands or territories, the country’s Bureau of Meteorology said in a statement.

In Victoria, a calm Premier Daniel Andrews tweeted: “Yes, that was an earthquake.”

Victoria State Emergency Service said there had been “widespread [quake] felt reports. There is no tsunami threat.”

In Adelaide, the main hospital building was briefly evacuated due to shaking felt at the Queen Elizabeth Hospital in Woodville.

Staff were also evacuated from Bendigo Hospital in Bendigo, Victoria and Alfred Hospital in Melbourne.

Workers ran outside businesses in Wagga Wagga as the “ground was shaking violently”, reported one man.

Some residents took to social media to double-check they hadn’t imagined the shaking.

Yes, that was an earthquake.

Lucy Cochran tweeted: “Um Melbourne. Was that an earthquake?”

Elsewhere on Twitter there were photos showing grocery items scattered across the floor in supermarkets after being tossed from shelves.

There was also a sense of drama on live TV news shows, when cameras and tables starting shaking as presenters were rocked on air.

Another tweeted: “Okay, that was scary… I’ve felt little shakes before, this was the biggest I’ve ever felt.”

‘Snow bunny’ tweeted: “Felt it in Thredbo NSW! I didn’t know we got earthquakes like that in Australia.

“It was very confusing. I thought it might have been an avalanche/landslide.”

‘Sophie T’ added on Twitter that the “whole apartment building was swaying in Zetland, Sydney. We thought we were dizzy at first!”

According to Melbourne locals, it “went on for a good ten or so seconds and knocked stuff off the shelf”.

Geoscience Australia reported there were three earthquakes within an hour south of Mansfield in Victoria – ranging in magnitude from 3.1 to 6.0. 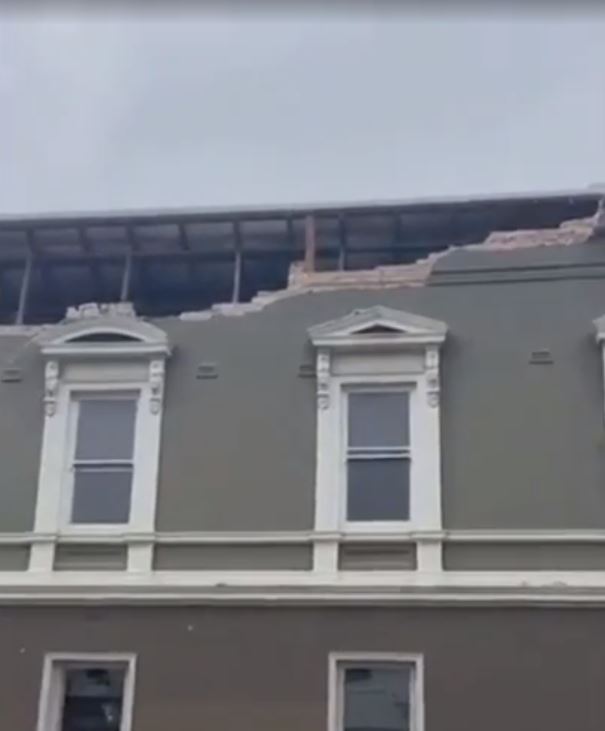 The top of one building also crumbled in MelbourneCredit: Twitter 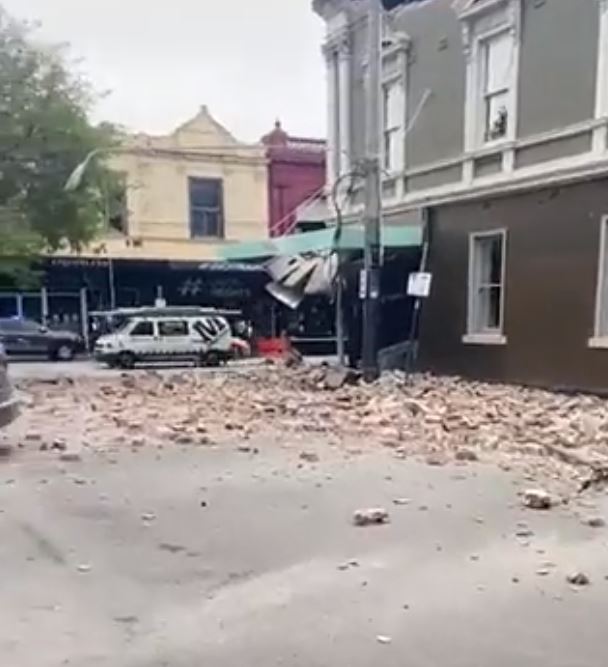