AT least 100 protesters have been killed and thousands wounded during mass protests in Iran, an opposition group has claimed.

The Islamic Republic has been plunged into chaos after the death of Mahsa Amini, who was allegedly beaten, arrested and left in a coma by the regime’s morality police – The Guidance Patrol – for not following the country’s strict hijab laws.

Violence has swept Iran after a young woman was killed by police for not wearing a hijabCredit: AFP 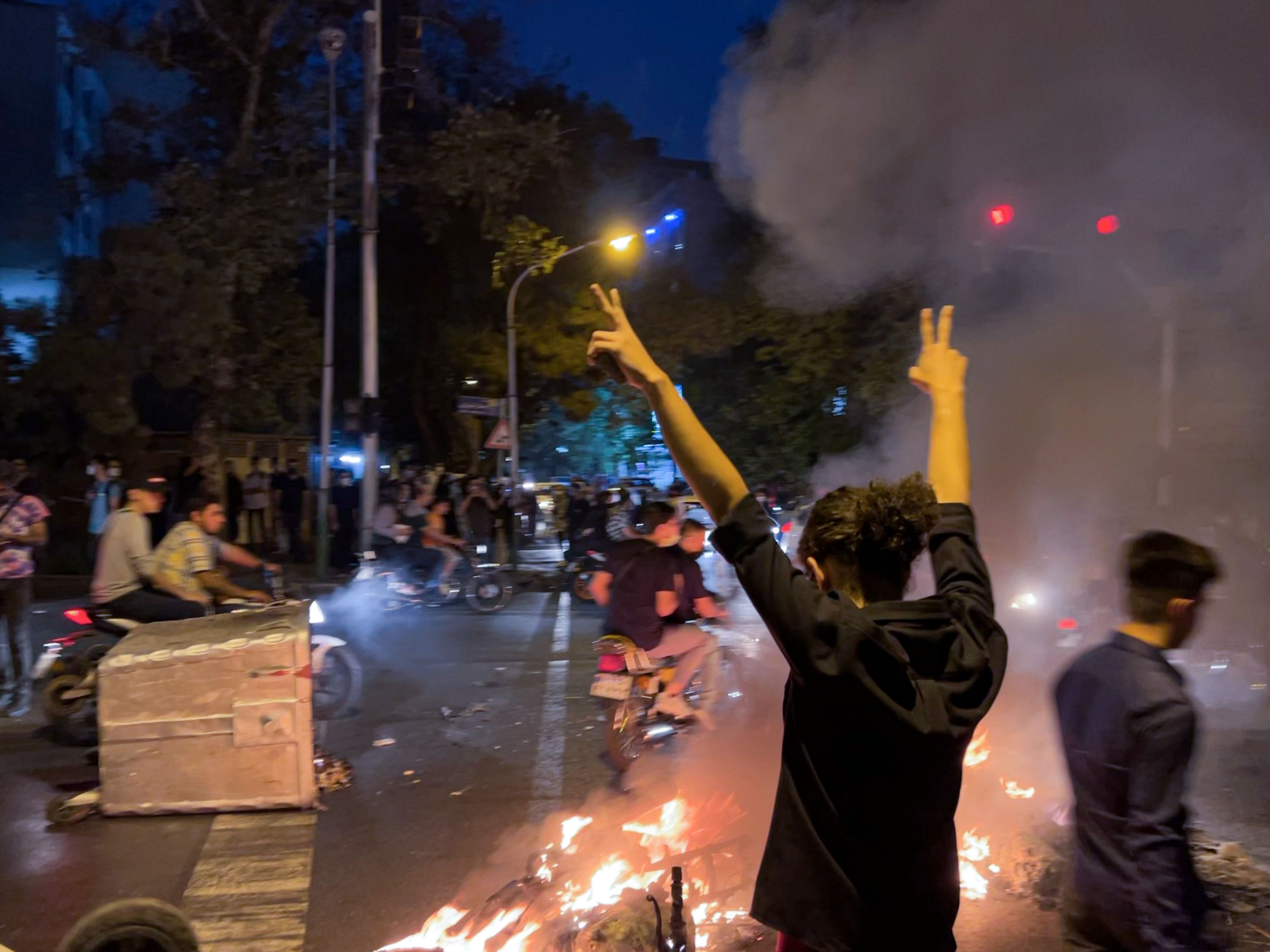 Opposition groups claims at least 100 have been killed during protestsCredit: Getty

At least 100 protesters have been killed, hundreds wounded, and thousands arrested, including 1,800 in Tehran alone, according to the People’s Mujahedin Organisation of Iran (MEK).

There have been protests in 133 cities in all 31 provinces.

Mahsa’s death sparked a wave of protests against the country’s strict laws which have been viciously cracked down upon by Tehran. 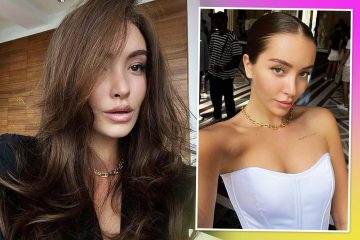 Demonstrators have clashed with police, hurling rocks and bottles, as well as setting fires in a number of cities following over a week of protests.

Some women, meanwhile, have torn off their hijabs and thrown the legally-required garment onto bonfires.

Iran’s Revolutionary Guard have vowed an even harsher crackdown on the protesters which are being backed by women’s rights figures worldwide.

Iran is claimed to have deployed an elite unit of all-female commando cops in a bid to bust the protests – with many demonstrators shouting “death to the dictator”.

A video shot during the funeral of Mohsen Qeysari, a 32-year-old protestor from Ilam who was killed during the protest, showed people vowing to avenge his blood.

Wednesday’s footage showed people chanting, “I will kill the ones who killed my brother”.

In a statement to The Sun, Shahin Gobadi, a spokesman of the MEK, based in Paris said: “People from all walks of life have risen for freedom across Iran, in the capital, and from West to East, and North to South.

“Women, in particular, young women are taking the lead and their high fighting spirit who in step with freedom-loving youths and men drive back the IRGC [Islamic Revolutionary Guard Corps] mercenaries with chants of “Death to [Iran’s supreme leader Ayatollah Ali] Khamenei,” is the promise of a democratically elected republic based on gender equality and national sovereignty.”

Commenting on the ongoing protests despite the alleged heavy death toll, Gobadi said: “It is very telling that despite brutal suppression, the regime has failed to quash the protests.”

The MEK spokesman highlighted that the Iranian regime has turned to Internet shutdown and blocking social media in a bid to prevent the spread of Iran protests via news channels.

“The world must condemn this cruel censorship and provide free access. The world should be on the side of the Iranian people.

“It should impose serious sanctions on the regime and its leaders and should hold them accountable.” 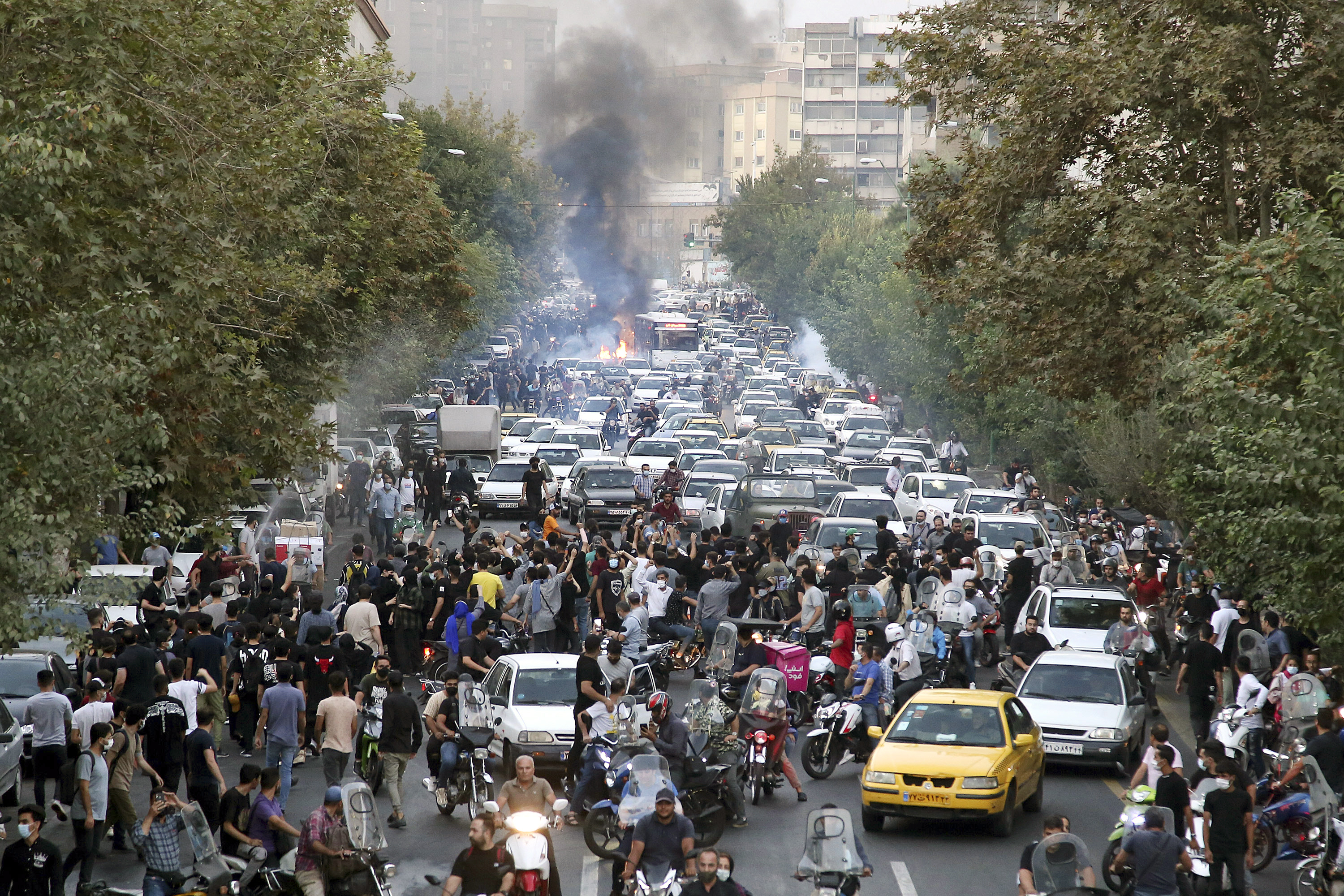 Iranian authorities have launched a crackdown on protesters

In a sermon on Friday, meanwhile, Tehran prayer leader Kazem Sadighi alleged protesters were “unveiling Muslim women and torching the Quran” and called on the country’s courts to punish “the leaders of the riots” who he described as murderers.

Sadighi’s claims have not been substantiated, and no reports have so far emerged of protesters burning the holy book.

It comes as Iran’s state TV broadcast footage of pro-government rallies in the capital and several other cities.

Footage posted on Twitter appeared to show a group of pro-government supporters walking down Enghelab (Revolution) Avenue in central Tehran.

Unrest has been sparked after Mahsa Amini, 22, was battered to death by morality police after her arrest for not wearing the religious headscarf, which is legally required for Iranian women.

Officers of the Guidance Patrol, who enforce the clothing rules, claimed Mahsa went into sudden heart failure at the police station and died on 16 September after two days in a coma.

However, eyewitnesses alleged she was beaten by cops and had her head slammed into the side of a police car.

Khamenei, meanwhile, was reported to be “gravely ill” after undergoing life-saving surgery on his bowel last week. 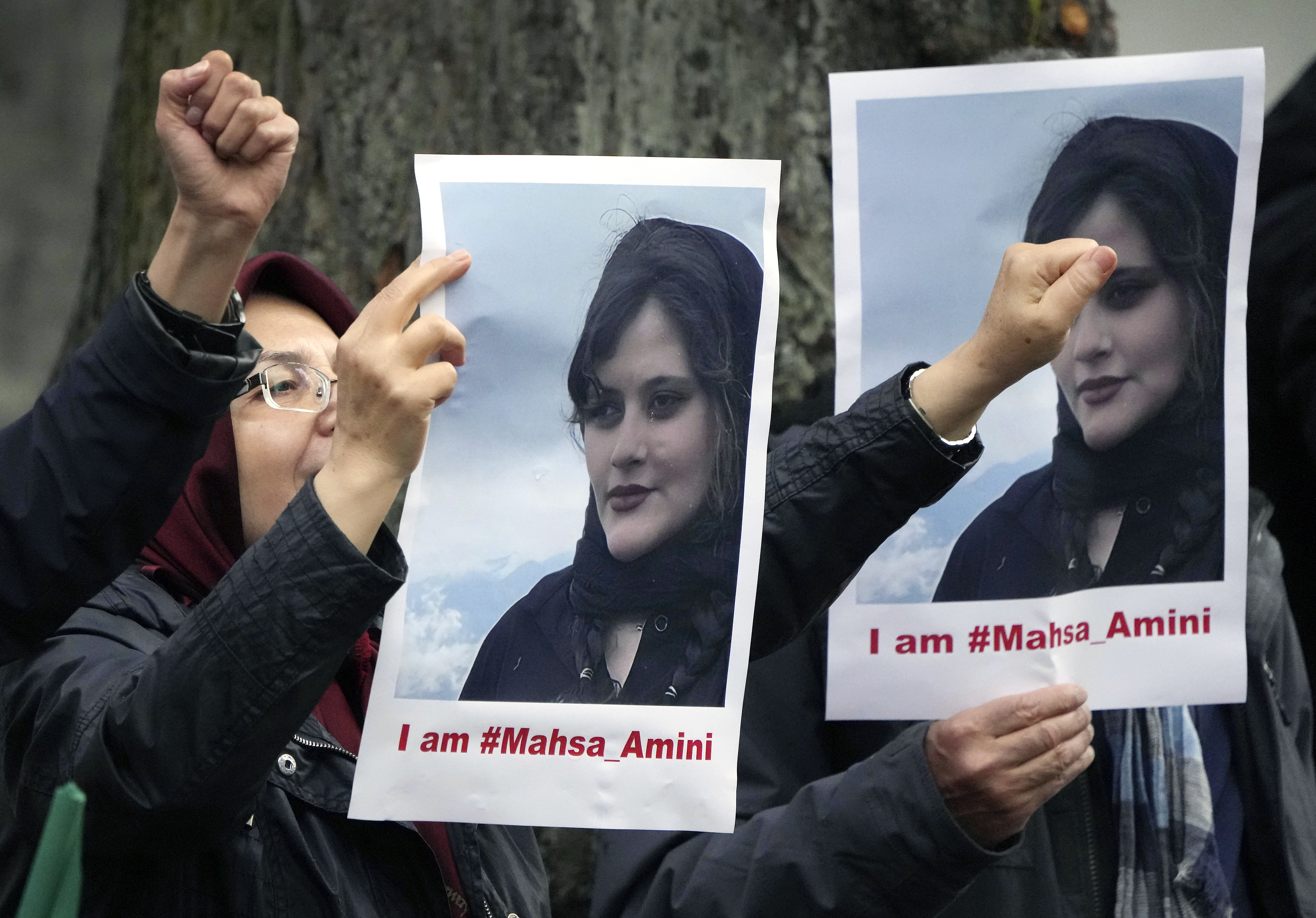 Thousands are protesting the death of Mahsa Amini 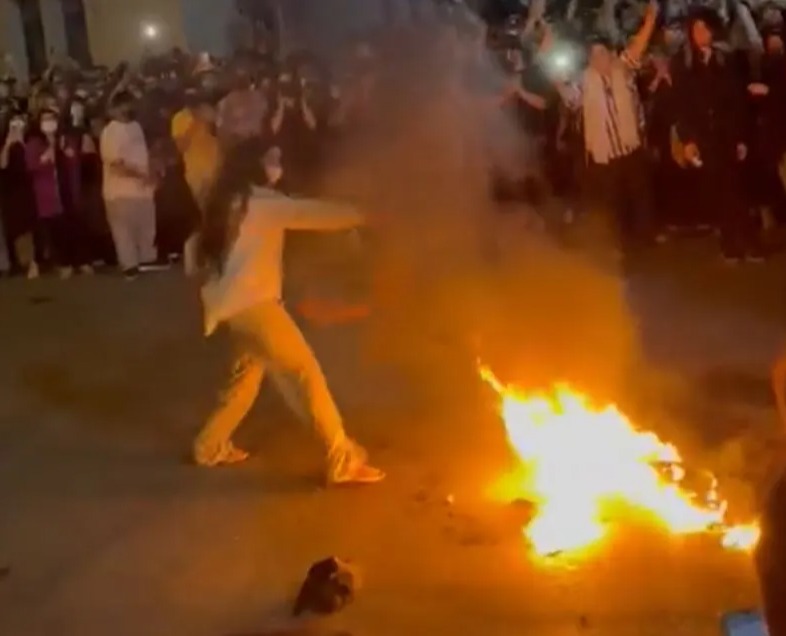 Female protestors have been filmed burning their hijabs 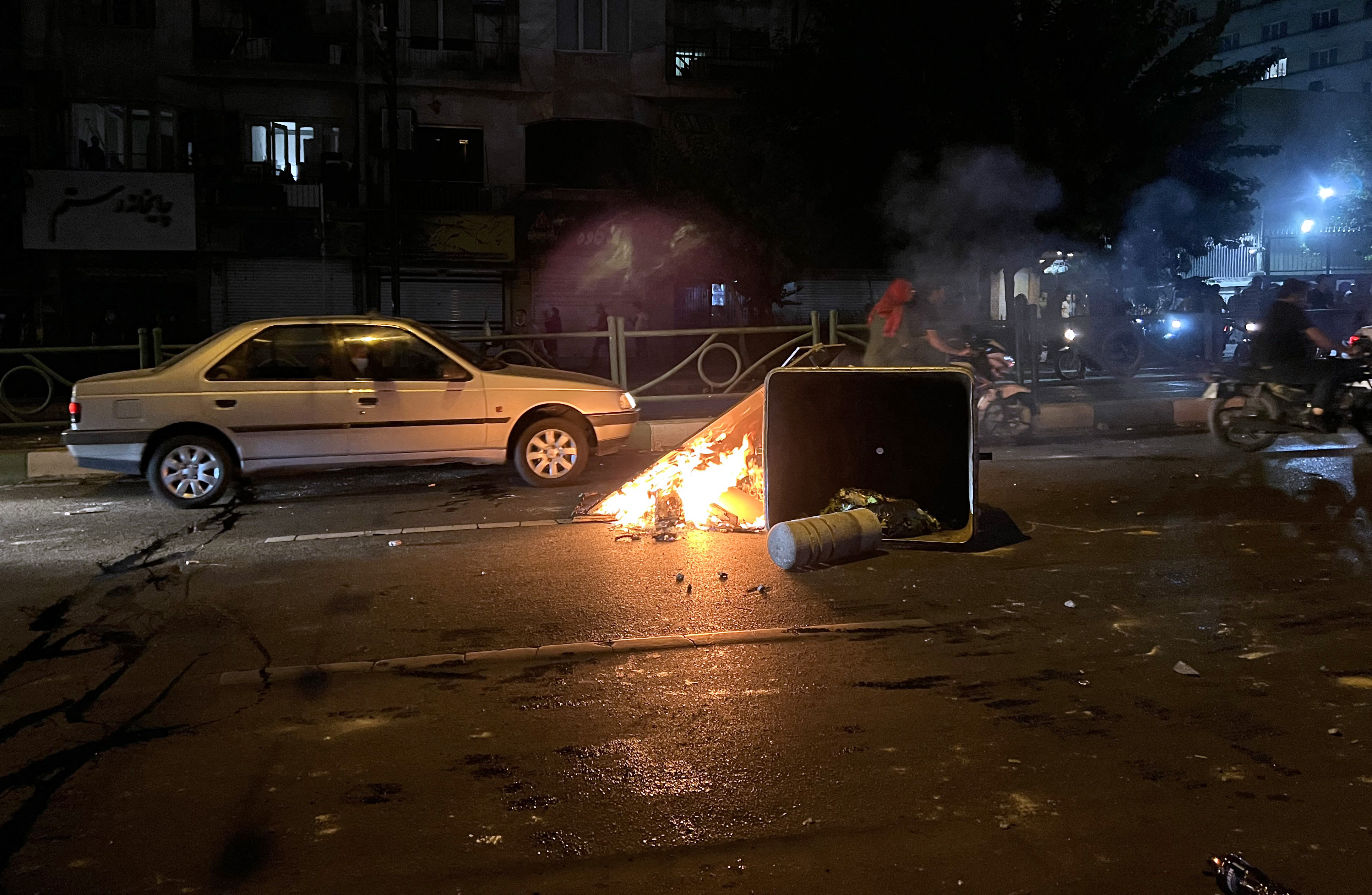 Protesters have been accused of “unveiling Muslim women and torching the Quran”Credit: AFP