A JOCKEY who left a rival in a ‘pool of blood’ after a weighing room bust-up stated he ‘could not management’ his anger.

Famed Italian rider Fabio Branca, who has raced at Ascot, was banned for 40 days and fined the maximum £2700 for punching rival Claudio Colombi.

Branca, left, stated he ‘could not management’ his anger within the weighing room bust-up that left a rival in a ‘pool of blood’Credit score: Getty 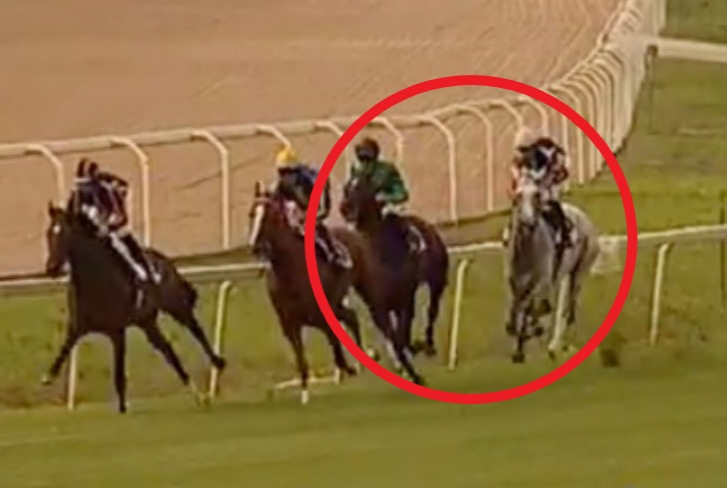 The bust-up occurred after this mid-race incident

He was reported to have suffered ‘deep cuts’ and underwent checks for doable facial fractures.

Police have been referred to as to Campannelle racecourse in Rome, the place Branca was, in accordance with equos.it, led away by cops as Colombi was taken to San Giovanni hospital.

It’s believed the battle was sparked by an incident through the second race on final Friday’s card.

Branca, who initially denied hitting his fellow jockey, has now launched an announcement apologising for the incident.

He stated: “In reference to the occasions that came about on September 10 within the jockeys’ room of the Capannelle racecourse, I really feel compelled to apologise to all horse racing classes (homeowners, coaches, and so on) and to all these within the Italian gallop (bettors, lovers and so on) for what occurred.

“My behaviour within the circumstance was really reprehensible.

“Those that actually know me know that it’s removed from my character to react with violent acts within the face of hostile circumstances.

“However on this circumstance, sadly, I’ve not been capable of management my anger.

“I don’t wish to deny my obligations and provides justifications for an act that I ought to by no means have performed and which is completely not a part of my unusual behaviour.

“I consider it’s applicable to supply my apologies to all of you as a result of these details, along with damaging me personally, danger proposing a fallacious picture of our whole exercise, thus not directly penalising every of you and the game itself.

“I am not asking to be justified for my behaviour, but as a person I had a moment of anger which I handled in the wrong way.”

The official stewards’ report on the scrap learn: “Branca confirmed that he had hit his colleague Colombi in the face in the jockeys’ room, fully recognising his responsibility for what happened.”

Colombi reported too that he had been ‘punched within the face by his colleague’ leaving him ‘mendacity on the bottom in a pool of blood’.

Different jockeys on the assembly missed the incident however returned to the weighing room to seek out Colombi had misplaced a ‘copious quantity of blood’.

That is removed from the primary time jockeys have come to blows.

Probably the most well-known was the unbelievable Breeders’ Cup brawl where one rider threatened to ‘kill’ another in 2010.

Whereas one other surprising video confirmed police dashing in to interrupt up two jockeys fighting in this changing room brawl.