ARSENAL will report back at London Colney in less than two weeks before heading to Germany for their first match of the summer.

The Gunners begin their preparations for the 2022-23 campaign on June 27 as Mikel Arteta prepares for another shot at securing Champions League football.

Mikel Arteta’s Arsenal side will report back for pre-season training on June 27Credit: Getty

Tottenham pipped their North London rivals to fourth spot on the last game of the season.

But Arteta still managed to claim a spot in Europe after failing to playing in any Uefa competition last term after finishing eighth in 2021.

And the Spaniard will now be aiming to go one better this time around when he welcomes his players back to the club.

According to Arsenal Fixture News, the first team squad are due to return on June 27. 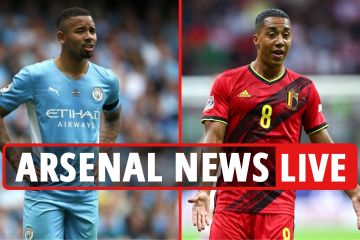 Though this excludes those currently on international duty, who will be given more time off to recharge.

That means English quartet Aaron Ramsdale, Bukayo Saka, Emile Smith Rowe and Folarin Balogun will not be reporting for the first day of pre-season training.

Should Manchester City striker Gabriel Jesus make the move to the Emirates, he would also join up later due to his involvement with Brazil.

Leicester’s Belgian midfielder Youri Tielemans would also be given extra time off should he complete a £25million transfer.

Arsenal return to pre-season training earlier than usual before their trip to Germany to face Bundesliga 2 outfit FC Nurnberg on July 8.

They will then return to the English capital, before heading out to America on July 13 for their US tour.

Three days after touching down in the States, Arsenal will face Everton at the M&T Bank Stadium in Maryland.

During their time in America, they will also pit their wits against MLS club Orlando City and Chelsea in Florida.