The 49-year-old shot to stardom in Vince McMahon’s promotion but last appeared for them at the Greatest Royal Rumble in April 2018. 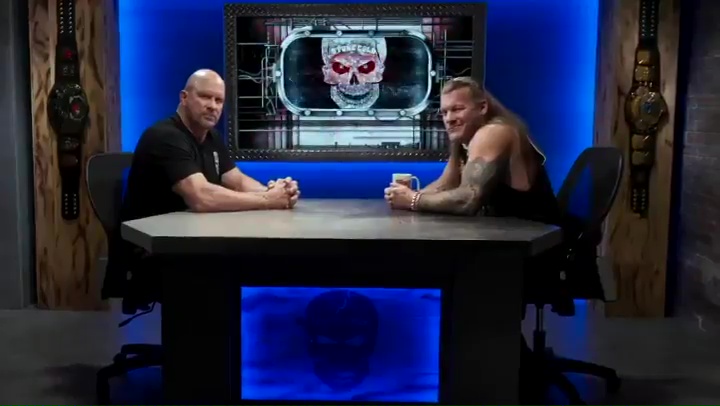 Now he is starring as the top heel in rival promotion All Elite Wrestling and even became their inaugural champion last year.

But Austin has announced that he will sit alongside Jericho on April 11 – the same day that Night 2 of WrestleMania 37 takes place.

Y2J’s appearance will mark the first time that a current AEW star has shown up on WWE programming via original content.

And Stone Cold revealed that he sought out boss McMahon to approve Jericho returning to the company.

He said he’d love to do it, so I checked with Vince [McMahon] about it. I texted Vince and said we had this badass idea about Jericho coming on the show

He told Sports Illustrated: “I was having a beer one night after my Broken Skull Sessions interview with The Undertaker aired, and out of the blue, Chris Jericho reached out and said, ‘Man, that was a great interview.’

“I sent him back a couple of those emojis, one of a beer mug and the other of an eagle, and then he called me right then and there.

“We got to talking. I’ve always respected the hell out of his career, and I’m glad they’re around—it gives the guys and girls in professional wrestling more places to work. I said, ‘I’d love to have you on the show.’

“And he said he’d love to do it, so I checked with Vince [McMahon] about it. I texted Vince and said we had this badass idea about Jericho coming on the show.

“Vince goes, ‘It’s cool. Go ahead.’ But me and Vince don’t always do well with phones and texts and all that, so I texted one more time, ‘Are you sure it’s O.K. to have Chris Jericho on the show?’ Vince gave me the thumbs up, and Chris came out to do the show.

“We go into everything. Jericho is one of the all-time greats, and it’s going to be cool to have someone from AEW on a WWE show.

“To bottom line it, I’m excited for people to watch this show.”