Nobody enjoys failing. Fear of failure can be so strong that avoiding failure eclipses the motivation to succeed. Insecurity about doing things incorrectly causes many people to unconsciously sabotage their chances for success.

Fear is part of human nature. As an entrepreneur, I faced this same fear. My ego and identity became intertwined with my work, and when things didn’t go as planned, I completely shut down. I overcame this unhealthy relationship with fear, and I believe that you can, too.

Together we’ll examine how you can use failure to your advantage instead of letting it run your life. We’ll also look at how to overcome fear of failure so that you can enjoy success in your work and life.

What Is Fear of Failure?

If you are afraid of failure, it will cause you to avoid potentially harmful situations.

Fear of failure keeps you from trying, creates self-doubt, stalls progress, and may lead you to go against your morals.

Hyper-critical adults cause children to internalize damaging mindsets. They establish ultimatums and fear-based rules. This causes children to feel the constant need to ask for permission and reassurance. They carry this need for validation into adulthood.

Perfectionism is often at the root of a fear of failure. For perfectionists, failure is so terrible and humiliating that they don’t try. Stepping outside your comfort zone becomes terrifying.

The ego may lead us to over-identify with failures. It’s hard to look beyond failure at things like the quality of the effort, extenuating circumstances, or growth opportunities.

People with true confidence know they won’t always succeed. A person with fragile self-confidence avoids risks. They’d rather play it safe than try something new.

How the Fear of Failure Holds You Back

Too many organizations today have cultures of perfection: a set of organizational beliefs that any failure is unacceptable. Only pure, untainted success will do.

Imagine the stress and terror in an organization like that. The constant covering up of the smallest blemishes. The wild finger-pointing as everyone tries to shift the blame for the inevitable messes onto someone else. The lying, cheating, falsification of data, and hiding of problems—until they become crises that defy being hidden any longer.

Miss out on Valuable Opportunities

If some people fail to reach a complete answer because of the lure of some early success, many more fail because of their ego-driven commitment to what worked in the past. You often see this with senior people, especially those who made their names by introducing some critical change years ago.

They shy away from further innovation, afraid that this time they might fail, diminishing the luster they try to keep around their names from past triumph.

Besides, they reason, the success of something new might even prove that those achievements they made in the past weren’t so great after all. Why take the risk when you can hang on to your reputation by doing nothing?

Such people are so deeply invested in their egos and the glories of their past that they prefer to set aside opportunities for future glory rather than risk even the possibility of failure.

Every talent contains an opposite that sometimes turns it into a problem. Successful people like to win and achieve high standards. This can make them so terrified of failure that it ruins their lives. When a positive trait, like achievement, becomes too strong in someone’s life, it’s on the way to becoming a major obstacle.

Achievement is a powerful value for many successful people. They’ve built their lives on it. They achieve at everything they do: school, college, sports, the arts, hobbies, work. Each fresh achievement adds to the power of the value in their lives.

Gradually, failure becomes unthinkable. Maybe they’ve never failed yet in anything that they’ve done, so they have no experience of rising above it. Failure becomes the supreme nightmare: a frightful horror they must avoid at any cost.

The simplest way to do this is never to take a risk, stick rigidly to what you know you can do, protect yourself, work the longest hours, double and triple check everything, and be the most conscientious and conservative person in the universe.

If constant hard work, diligence, brutal working schedules and harrying subordinates won’t ward off the possibility of failing, use every other possible means to to keep it away. Falsify numbers, hide anything negative, conceal errors, avoid customer feedback, constantly shift the blame for errors onto anyone too weak to fight back.

Over-achievers destroy their own peace of mind and the lives of those who work for them. People too attached to “goodness” and morality become self-righteous bigots. Those whose values for building close relationships become unbalanced slide into smothering their friends and family with constant expressions of affection and demands for love in return.

Everyone likes to succeed. The problem comes when fear of failure is dominant, when you can no longer accept the inevitability of making mistakes, nor recognize the importance of trial and error in finding the most creative solution.

The more creative you are, the more errors you are going to make. Deciding to avoid the errors will destroy your creativity, too.

Balance counts more than you think. Some tartness must season the sweetest dish. A little selfishness is valuable even in the most caring person. And a little failure is essential to preserve everyone’s perspective on success.

We hear a lot about being positive. Maybe we also need to recognize that the negative parts of our lives and experience have just as important a role to play in finding success, in work, and in life.

How to Overcome Fear of Failure (Step-by-Step)

1. Figure out Where the Fear Comes From

Ask yourself what the root cause of your negative belief could be. When you look at the four main causes for a fear of failure, which ones resonate with you?

Write down where you think the fear comes from, and try to understand it as an outsider.

If it helps, imagine you’re trying to help one of your best friends. Perhaps your fear stems from something that happened in your childhood, or a deep-seated insecurity.

Naming the source of the fear takes away some of its power.

2. Reframe Beliefs About Your Goal

Having an all or nothing mentality leaves you with nothing sometimes. Have a clear vision for what you’d like to accomplish but include learning something new in your goal.

If you always aim for improvement and learning, you are much less likely to fail.

At Pixar, people are actually encouraged to “fail early and fail fast.” They encourage experimentation and innovation so that they can stay on the cutting edge. That mindset involves failure, but as long as they achieve their vision of telling great stories, all the stumbling blocks are just opportunities to grow.

In many cases, you believe what you tell yourself. Your internal dialogue affects how you react and behave.

Our society is obsessed with success, but it’s important to recognize that even the most successful people encounter failure.

Walt Disney was once fired from a newspaper because they thought he lacked creativity. He went on to found an animation studio that failed. He never gave up, and now Disney is a household name.

Steve Jobs was also once fired from Apple before returning as the face of the company for many years.

If Disney and Jobs had believed the negative feedback, they wouldn’t have made it.

It’s up to you to notice your negative self talk and identify triggers. Replace negative thoughts with positive facts about yourself and the situation. You’ll be able to create a new mental scripts that you can reach for when you feel negativity creeping in. The voice inside your head has a great effect on what you do. 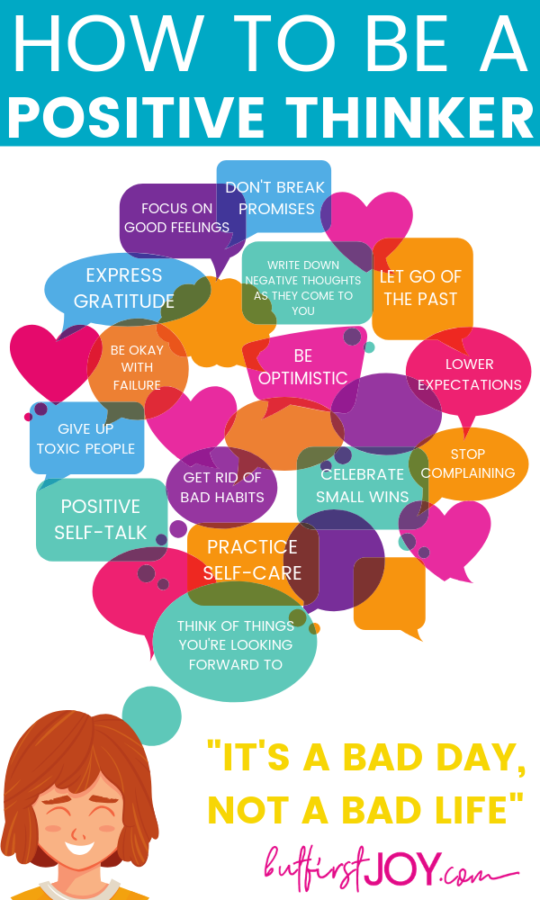 Uncertainty about what will happen next is terrifying. Take time to visualize the possible outcomes of your decision. Think about the best and worst-case scenarios. You’ll feel better if you’ve already had a chance to mentally prepare for what could happen.

Fear of the unknown might keep you from taking a new job. Weigh the pros and cons, and imagine potential successes and failures in making such a life-altering decision. Knowing how things could turn out might help you get unstuck.

5. Look at the Worst-Case Scenario

There are times when the worst case could be absolutely devastating. In many cases, if something bad happens, it won’t be the end of the world.

It’s important to define how bad the worst case scenario is in the grand scheme of your life. Sometimes, we give situations more power than they deserve. In most cases, a failure is not permanent.

For example, when you start a new business, it’s bound to be a learning experience. You’ll make decisions that don’t pan out, but often that discomfort is temporary. You can change your strategy and rebound. Even in the worst case scenario, if the perceived failure led to the end of that business, it might be the launching point for something new.

6. Have a Backup Plan

It never hurts to have a backup plan. The last thing you want to do is scramble for a solution when the worst has happened. The old adage is solid wisdom:

“Hope for the best, prepare for the worst.”

Having a backup plan gives you more confidence to move forward and take calculated risks.

Perhaps you’ve applied for a grant to fund an initiative at work. In the worst-case scenario, if you don’t get the grant, are there other ways you could get the funds?

There are usually multiple ways to tackle a problem, so having a backup is a great way to reduce anxiety about possible failure.

7. Learn From Whatever Happens

Things may not go the way you planned, but that doesn’t automatically mean you’ve failed. Learn from whatever arises. Even a less than ideal situation can be a great opportunity to make changes and grow.

Dig deep enough, and you’re bound to find the silver lining. When you’ve learned that “failure” is an opportunity for growth instead of a death sentence, you conquer the fear of failure.

For more tips on how to overcome fear of failure, check out the video below:

To overcome fear of failure, we can start by figuring out where it comes from and reframing the way we feel about failure. When failure is a chance for growth, and you’ve looked at all possible outcomes, it’s easier to overcome fear.

Stay positive, have a backup plan, and learn from whatever happens. Your failures will be sources of education and inspiration rather than humiliation.

Failures can be blessings in disguise. Go boldly in the direction of your dreams and long-term goals.