CASES of Covid-19 are still rising in 18 areas in England and this interactive map reveals if your local area is on the list.

Data from Public Health England (PHE) shows that infection rates have fallen in 94 per cent of areas (297 local authorities).

In signs the third national lockdown is starting to have an impact, the data shows that cases are rising in just six per cent of areas.

Speaking at a Downing Street press conference last night, the government’s chief scientific adviser, Sir Patrick Vallance said the country is in a position where the lockdowns have worked.

Data from PHE accounts for the seven days up to January 23 and shows that Knowsley in Merseyside continues to have the highest rate in England. 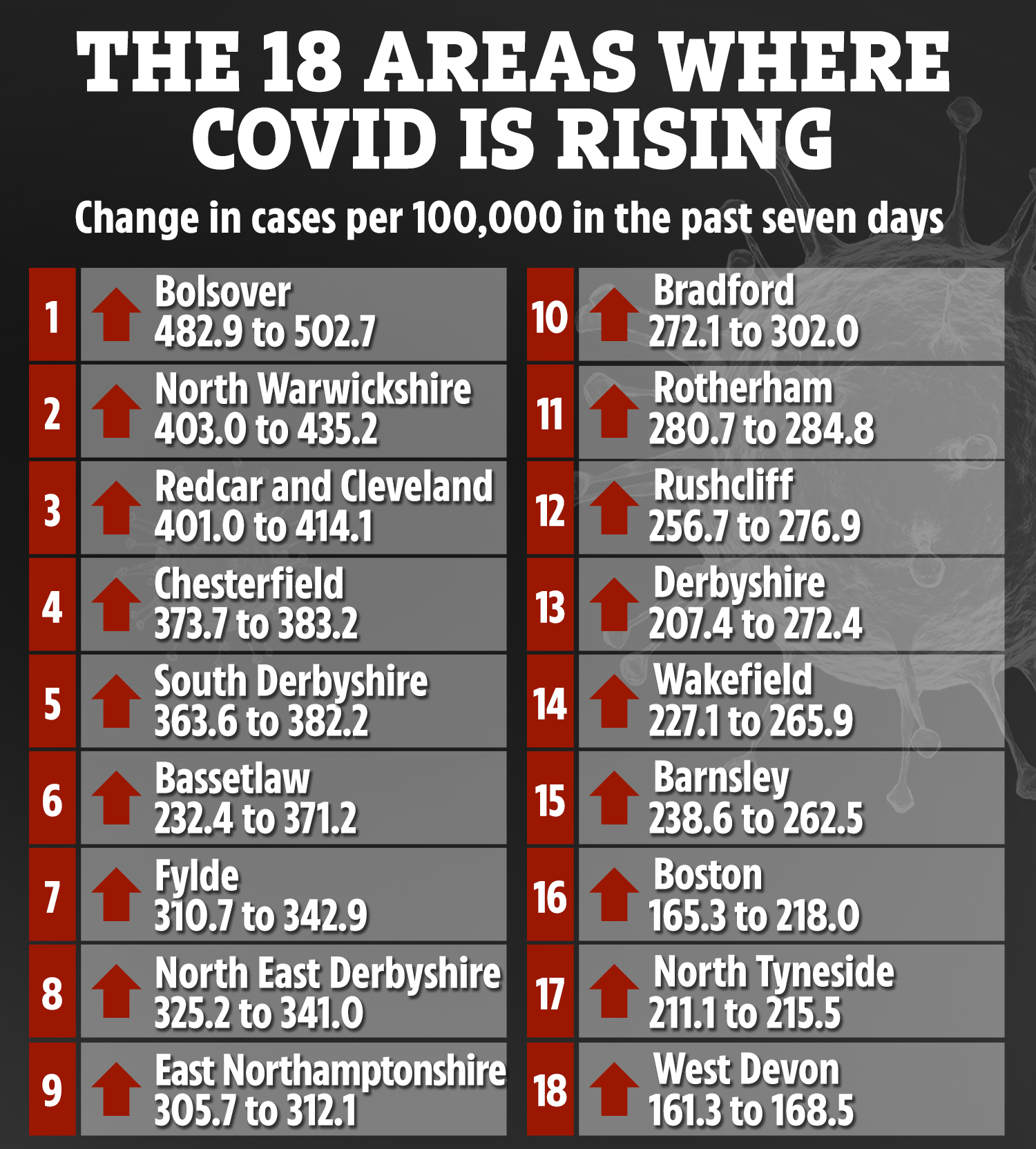 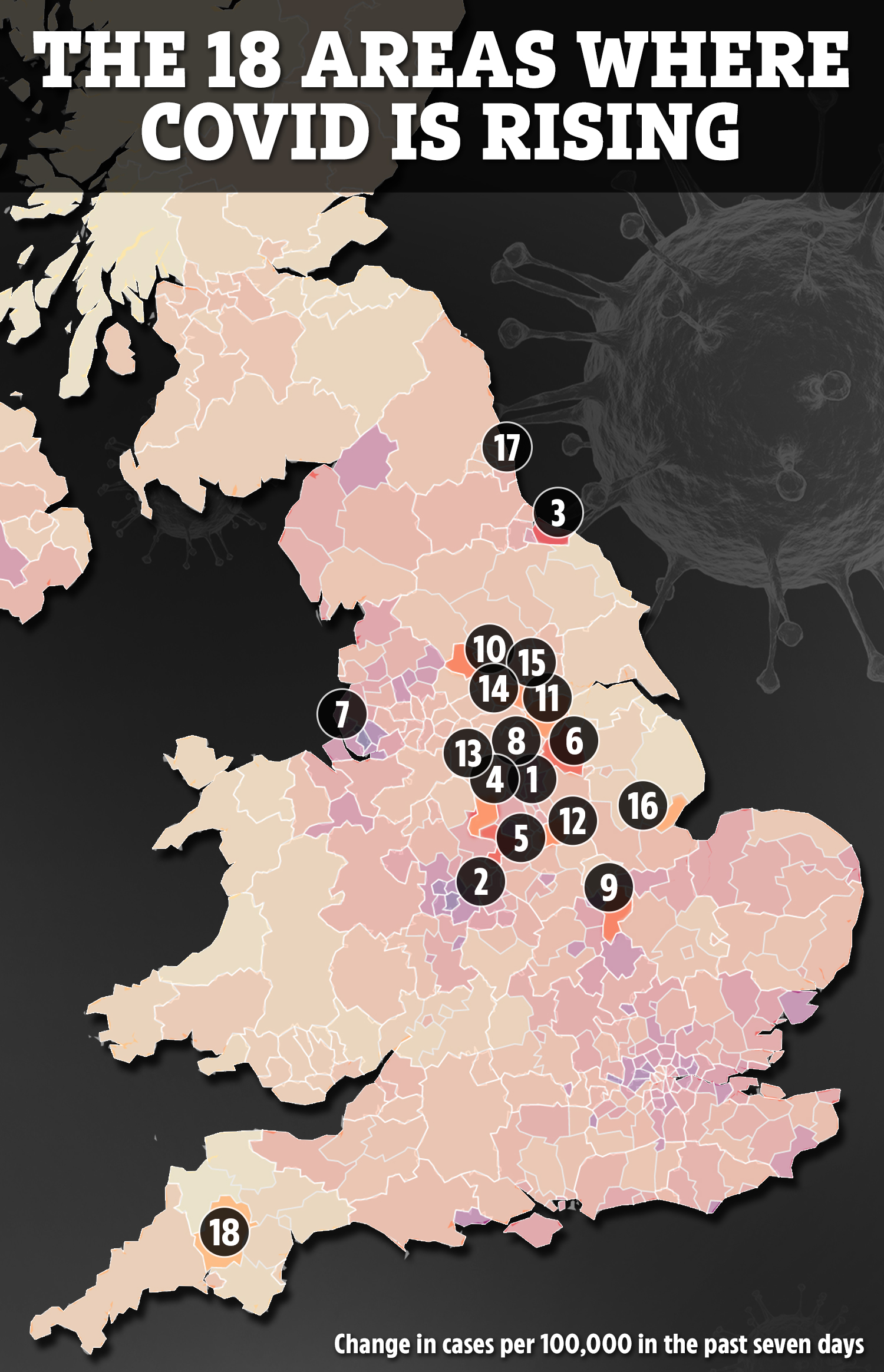 While cases are falling in the most infected places in the country, these are 18 local authorities where cases are still on the up.

Bolsover, North Warwickshire, Redcar and Cleveland, Chesterfield and South Derbyshire have all seen a rise in cases in the last seven days.

Vaccines are being rolled out across the area and Bassetlaw’s conservative MP was this week criticised after he received a dose of the vaccine.

Brendan Clarke-Smith had the jab on Friday after volunteering at Retford Hospital vaccination centre and said he only had the jab as otherwise it would have gone to waste.

In a statement he said: “At the end of a day of volunteering there were some left over vaccinations and rather than letting them go to waste they offered me a vaccination so I don’t put people at risk while continuing to volunteer.”

Other areas that have seen a rise in infections include Fylde and North East Derbyshire.

Bradford, Rotherham, Rushcliffe, the Derbyshire Dales, Wakefield and Barnsley have also seen a rise in cases.

Homes across the area have this week been left with rubbish outside their properties after staff at a waste plant in the area had to self-isolate after contracting the virus.

North Tyneside and West Devon have also seen a rise in cases.

While cases are rising in 18 areas above, the rest of the country has seen a fall in infections.

Boris Johnson yesterday announced there will be a “phased” route out of lockdown, beginning with a review in mid-February and schools likely to reopen after March 8 at the earliest.

The PM is busy plotting a route out of the unprecedented shutdown of society – and pledged to reveal the blueprint on February 22.

He said schools will be the first to reopen under the new road map, which will take a “gradual” approach to lifting restrictions.

Boris has maintained lockdown would be lifted in stages – as it was last year – based on the success of the vaccine rollout, a drop in pressure on the NHS and falling Covid cases and deaths.

Is It Normal to Have a Headache After the COVID-19 Vaccine?

Injuries and suspensions ahead of Dream Team Game Week 23

Undocumented immigrants were turned away from Texas vaccination site 4 Ways to Stay Close to Your Long-Distance BFF

9 unexpected erogenous zones and how to stimulate them