In her feelings! Sarah Jessica Parker got a little emotional watching her iconic Versace dress from the final season of Sex and the City make a grand reappearance on the show’s revival series, …And Just Like That.

Carrie Bradshaw originally wore the iconic olive green dress as she waited for boyfriend Aleksandr Petrovsky (Mikhail Baryshnikov) to return to their hotel room in Paris. Fast forward to the Thursday, January 20, episode of the HBO Max series and Carrie whipped out the princess gown once again.

Filming the scene in a dress she wore nearly two decades prior made for quite an emotional moment. The 56-year-old actress took to Instagram hours before the episode went live to share a before and after photo along with a heartfelt caption. 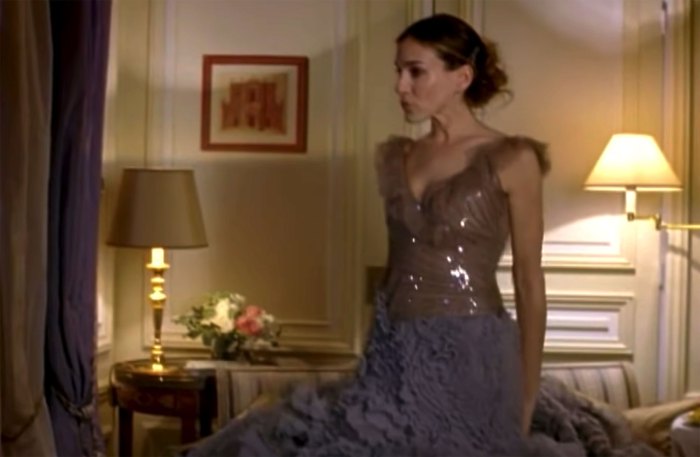 Sarah Jessica Parker in ‘Sex and the City.’
YouTube

“We found her. Slithered in. Caught up. It’s been so long. She had much to share. Brief and hard to say goodbye again,” she captioned her post, adding her signature “X, SJ.”

The touching tribute to the dress that’s been through it all clearly resonated with fans, as Parker’s followers jumped into the comments section instantly.

“Stunning both times,” a user wrote, while another said, “God I love that gown. So happy she came back for another viewing.” Another person added: “Favorite scene. Omg. So glad you guys brought back the iconic dress. Nothing made me happier!”

Thankfully, this dress — along with hundreds of other outfits from the original series — were safely stowed away in the Hocus Pocus star’s personal archive.

Costume designer Danny Santiago and Molly Rogers relied on the extensive log of vintage clothes heavily when deciding what outfits to use in the revival series.

“To have access to all of Sarah Jessica’s archives was so great,” Santiago exclusively told Us Weekly. “I think that’s probably the only show where you have somebody who actually saved all of these amazing, beloved pieces.”

He went on to explain that the mysterious archive is “everything a fan would expect it to be,” noting that it’s filled with “so many beautiful things.”

While a handful of items made a grand return, like the purple Fendi baguette bag and Prada snakeskin shoes, the costume designers made point not to overdo it — they chose the items “very carefully” and hunted for “perfect moment” to showcase them.

“We let the Roger belt have its moment — not use it five times,” Rogers said of the studded belt that Carrie first wore in the 2008 movie. “We wanted to spotlight these treasures because fans really love them. They want to see them again.”