Accessorizing like Carrie Bradshaw has never been easier. Because get this: Sarah Jessica Parker has teamed up with Fendi to create a limited-edition sparkly pink handbag that’s going to be available for purchase in just a few week’s time.

Oh, and you’ve likely already seen the purse in all it’s glory on screen. In the Thursday, January 28, episode of the Sex and the City revival series, …And Just Like That, Carrie rocked the fabulous Baguette while out and about with Seema Patel [Sarita Choudhury].

The stunning bag is blinged out in pink sequins, has leather straps and, of course, the iconic FF buckle.

According to a press release, the piece “is inspired by the original version of the Fendi FW 1999/2000 Collection that was carried by Sarah Jessica Parker in the acclaimed Sex And The City scene in the early 2000s.”

For reference, Carrie rocked a purple sequin Fendi Baguette Bag in season 3 of Sex and the City. The bag was stolen from her while walking around in SoHo and she famously said to the mugger, “It’s a Baguette.”

The accessory made a grand return in episode 3 of …And Just Like That, when Carrie carried the glitzy number on a night out with Charlotte [Kristen Davis] and Miranda [Cynthia Nixon]. 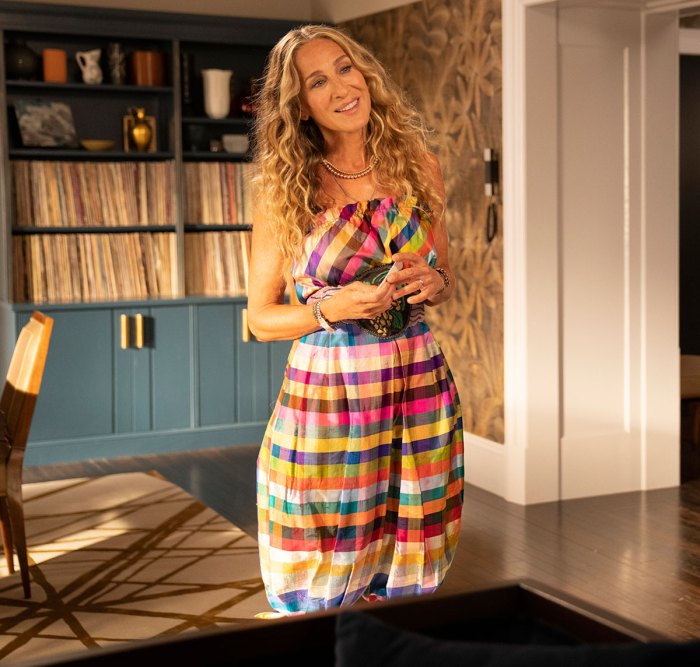 Costume designers Molly Rogers and Danny Santiago told Us Weekly that they carefully selected certain items that held significance to fans to use in the revival.

“We wanted to spotlight these treasures because fans really love them. They want to see them again,” Rogers said. Still, they made a point not to “overdo it.”

“We really found perfect moments to be able to feature these pieces,” Santiago told Stylish.

In addition to the Fendi Baguette Bag, the costume designers also gave a few pairs of shoes, including Manolo Blahnik pumps, a cameo, the Roger Belt, which first appeared in the 2008 Sex and the City movie, a modern spin, and the Versace dress Carrie first wore in Paris another spin.

In addition to sentimental pieces, they also sourced vintage items from ThredUp, hunted for items in thrift stores and plucked a handful of items from new designer collections.

I’m a mid-size girl with big boobs, I’ve found the perfect dress which flatters my body AND still looks hot

I’ve got a big bum and I always have the same problem with trousers, it drives me mad