Making their relationship permanent. Kim Kardashian revealed that boyfriend Pete Davidson got her name “branded” on his chest —meaning it can’t be removed alongside his other tattoos.

The Saturday Night Live star, 28, sent fans into a frenzy on Sunday, March 13, when a selfie he sent Kanye West appeared to show the name “Kim” inked on his chest. “He has a few tattoos, a few cute ones that he got [for me],” Kardashian, 41, said during a Wednesday, March 16, appearance on The Ellen DeGeneres Show. “But the ‘Kim’ one is not actually a tattoo. It’s a branding.”

The Skims founder explained that Davidson, who is in the process of removing many of his tattoos, wanted to get a permanent reminder of their relationship. “I think he was just like, ‘I want something that’s there, that I can’t get rid of [it like] my tattoos,’” Kardashian said, adding that her boyfriend didn’t want to be able to cover it up. “[He] just wanted it there as like, a scar.”

In addition to the branding, the comedian also has a tattoo that reads “My girl is a lawyer,” which Kardashian confessed was her favorite. “That’s what tattoo people do,” the Selfish author said. “They get tattoos of what’s going on in my life, so I was like, ‘Am I something special?’” Davidson also has multiple tattoos celebrating their relationship milestones, which the Keeping Up With the Kardashians alum described as “so cute.”

Kardashian, meanwhile, celebrated their budding romance in her own way: by making things Instagram official. “I have the cutest pictures of us and I want to be like, ‘Oh, we’re so cute!’” she explained of her Saturday, March 12 post, which featured snaps of her cuddling with Davidson. “I don’t know what the right thing to do is. I haven’t dated since before Instagram existed. I don’t know what the rules are [when it comes to posting a new relationship].”

The KKW Beauty founder was first linked to Davidson in October 2021 after she made her Saturday Night Live hosting debut. “He was a true professional the whole time they rehearsed and in between takes, but afterward things got flirty,” a source told Us Weekly at the time. “They exchanged numbers and Pete asked if Kim would like to hang out sometime, which she agreed to straight away.” 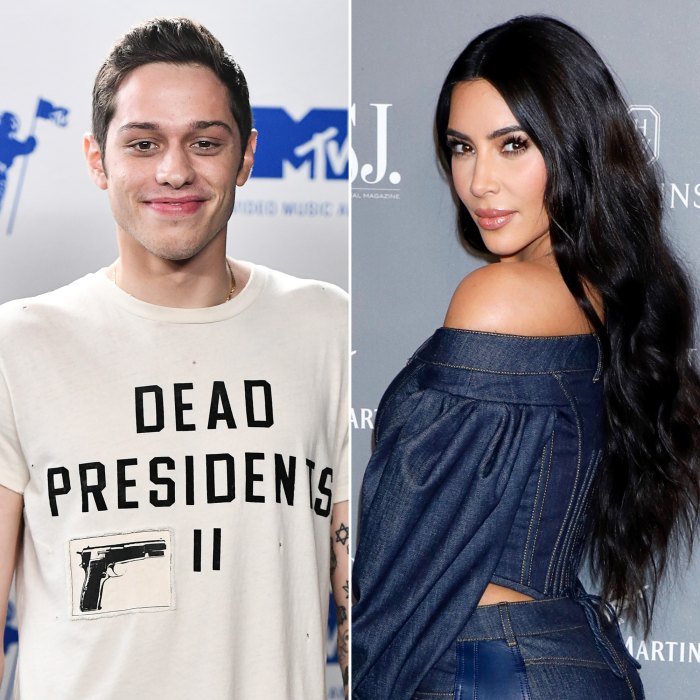 As the pair grew closer, Kardashian’s estranged husband, West, began making public pleas to win her back amid their very public divorce drama. On Sunday, March 13, the Yeezy Designer, 44, claimed that Kardashian was “antagonizing him” with 8-year-old daughter North‘s TikTok account. The following day, he alleged that he was being kept away from North and their other three children — Saint, 6, Chicago, 3, and Psalm, 2 — by the Kourtney and Kim Take New York star.

“This was on my daughter’s backpack when I was ‘allowed’ to see her last week,” West wrote via Instagram, sharing a photo of pins on his eldest daughter’s backpack bearing her parents’ faces. “This is why I go so hard for my family I am wired to protect my family at all cost[s]. As the priest of my home Don’t worry Northy God is still alive.”

In response, Kardashian commented: “Please stop with this narrative, you were just here this morning picking up the kids for school.”