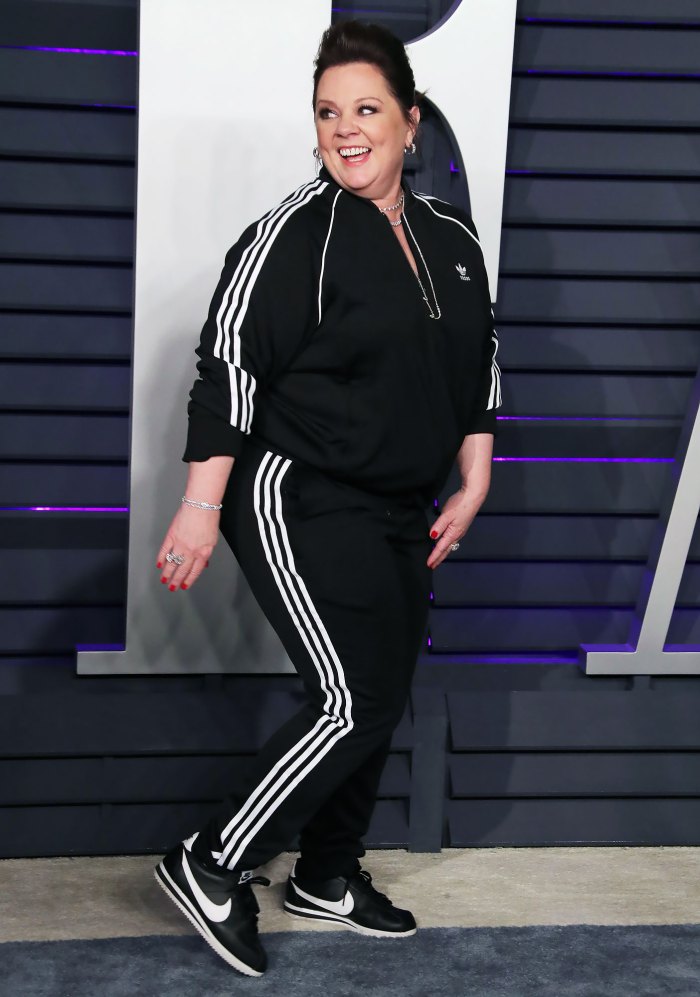 Trendsetter alert! While a handful of stars have traded in their suits and ties for sweats during the 2021 awards season (cough, cough Jason Sudeikis), Melissa McCarthy predicted the lounge-wear trend pre-pandemic when she decided to wear a tracksuit to the 2019 Oscars. But, according to her interview with InStyle, it seems that the stars fashion choice didn’t necessarily go over well.

McCarthy recalled that her matching adidas tracksuit with husband Ben Falcone attracted a bit of side eye and some nasty comments at the Vanity Fair Oscars Party.

“I have never been flipped off or told to f—k off as much as at the party, and it was all done, uh, jokingly, but also with something real behind it,” she told the magazine. “[After the ceremony] everyone put on a different dress and different heels. They just totally were like, ‘You go f—k yourself [for wearing a tracksuit].’”

Little did everyone know that 2020 would bring quite the change in fashion trends.

In typical McCarthy fashion, the comedian had quite the quippy response for the haters though. She simply said, “Oh, OK, I’m going to go dance pretty hard right now.”

Even though red carpet styles are typically planned out far in advance, the Super Intelligence star’s decision to sport black and white Adidas sweats was spur of the moment.

“I’m sure it threw everybody into a tizzy because the idea came to me the day before the Oscars,” the 50-year-old actress tells the magazine. “I asked, ‘Can we wear matching tracksuits?’ And someone was like, ‘For tomorrow? Like, that both fit?’ It’s not that easy. I just wanted to be in tennis and tracksuits. I just seemed so funny to me and so comfortable.”

While her after party look was a mere $130 and designed with pure comfort in mind, McCarthy and Falcone proved they could clean up nicely for the actual Oscars ceremony.

She stunned in a Brandon Maxwell black and white caped jumpsuit, which was accessorized with Forevermark jewelry. Falcone also looked dapper in a classic tux with a black bow tie and white flower broach.

Given the COVID-19 pandemic, the stars have definitely been more apt to trade in their stilettos for slippers. Still, most showed up in high-fashion red carpet looks for the Golden Globes and the Critics Choice Awards.

Nominations for the 2021 Academy Awards will be announced on Monday, March 15 by Nick Jonas and Priyanka Chopra via livestream. The 93rd Oscars will air on Sunday, April 25.

This Is Officially the New “Everyday” Jewelry Look of 2021

Crocs are no longer a house shoe, they are now a fashion statement

Selena Gomez Adds a Tiny Cross Tattoo to Her Collection