“Wishing the happiest birthday to my ethereal light being. i love you maki 🔪❤️🕯🕯,” Kelly, 32, captioned a compilation of Instagram photos on Monday, May 16. The social media upload included a glimpse at their voodoo doll tattoos on their ring fingers. 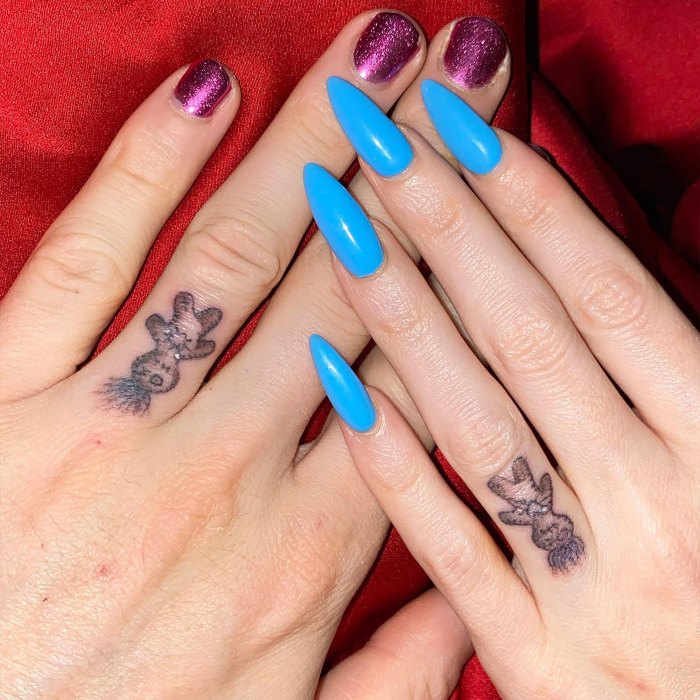 The couple’s display of permanent commitment to each another comes after they confirmed their engagement earlier this year.

“In July of 2020 we sat under this banyan tree. We asked for magic,” the actress, 36, captioned an Instagram video of the proposal in January. “We were oblivious to the pain we would face together in such a short, frenetic period of time. Unaware of the work and sacrifices the relationship would require from us but intoxicated off of the love. And the karma.”

Fox continued: “Somehow a year and a half later, having walked through hell together, and having laughed more than I ever imagined possible, he asked me to marry him. And just as in every lifetime before this one, and as in every lifetime that will follow it, I said yes. …and then we drank each other’s blood 1.11.22.”

The pair sparked romance rumors after they worked together on Midnight in the Switchgrass in 2020. After Fox and Kelly (real name Colson Baker) were spotted spending time together, Brian Austin Green announced his split from the Jennifer’s Body star following 10 years of marriage.

“Neither one of us did anything to each other,” Green, 48, said during his “… With Brian Austin Green” podcast in May 2020. “She’s always been honest with me and I’ve always been honest with her. And I know she will always love me and I know as far as a family, what we have built is really cool and really special. So we decided let’s make sure we don’t lose that. That no matter what we’re always friends with each other and we’re a united front with the kids.”

Fox, whose divorce from Green was finalized ahead of her engagement, previously opened up about her connection with the musician.

“The second that I was in a room with him … I knew right away that he was what I call a twin flame,” the Tennessee native shared during the July 2020 episode of the “Give Them Lala … With Randall” podcast. “Instead of a soul mate, a twin flame is actually where a soul has ascended into a high enough level that it can be split into two different bodies at the same time. So we’re actually two halves of the same soul, I think. And I said that to him almost immediately because I felt it right away.”

Amid the major milestone, the duo have continued to be candid about their bond. After Fox and Kelly attended the Billboard Music Awards on Sunday, May 15, they made headlines for sharing some NSFW details about their relationship.

The New Girl alum, who shares sons, Noah, 9, Bodhi, 7, and Journey, 5, with Green, took to social media to share a conversation between her and her stylist. “Was this blue outfit expensive because we just cut a hole in the crotch so we could have sex,” Fox wrote, adding a shrugging girl emoji on Monday. The response to her message read, “I hate you 😂😂😂. I’ll fix it.”

Emma Corrin Shows Off Body Hair on the Cover of ‘Vogue’

5 Best Shoes to Wear to Weddings This Summer — Shop Now

Kate Middleton wears elegant white dress: Here’s where to get the look