Kim Kardashian has done it again! On Thursday, October 14, the reality star proved that she’s the queen of making a fashion statement by surprising fans in a pair of fluffy sunglasses — and a handbag to match.

The Keeping Up With the Kardashians alum gave fans a look at the fuzzy ensemble on Instagram. She posted a series of what appear to be film photographs modeling her high-fashion wares for the camera — see the pics here.

Keeping with her recent all-black outfit streak, the mom of four worked the camera in head-to-toe Balenciaga. She wore the label’s Knotted Crepe Top ($1,390) and black spandex Pantaleggings ($2,850).

But her accessories, in particular, are getting a lot of attention. Kardashian donned the Balenciaga Women’s Fluffy Cat Sunglasses in Black ($1,150). She teamed the statement sunnies with the luxury label’s Hourglass XS Shearling-Effect Leather Bag ($1,890) to match. 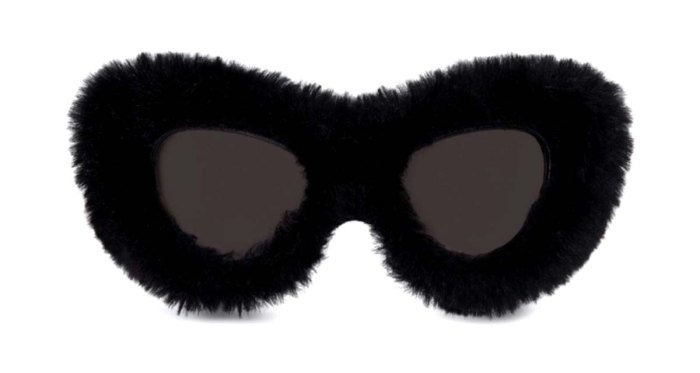 Naturally, the fuzzy sunglasses are polarizing Kardashian’s 258 million Instagram followers. “Well, now I want them,” one person commented. Another less-impressed social media user wrote, “She looks like a spider.”

The Skims founder’s latest look bears some resemblance to what she wore to the Met Gala. In the unlikely case that you missed it, Kardashian made headlines for her Balenciaga bodysuit that, quite literally, covered her face and body entirely.

The entrepreneur hasn’t offered much explanation as to her inspiration behind the look. She did, however, repost a Vogue article that made the case that Kardashian “rewrote the red carpet’s rules.”

“Completely obscuring her features and famous physique, the look gave the reality star something she hasn’t had in a long while: anonymity,” wrote the outlet’s senior fashion and culture editor Janelle Okwodu.

Despite the couple’s impending divorce, Kardashian has continued supporting her husband’s career endeavors. “We have an amazing coparenting relationship, and I respect him so much and I think we’ll have — I will forever be Kanye’s biggest fan,” she told Andy Cohen. “He’s the father of my kids. Kanye will always be family.”

They officially called it quits in February after tying the knot in 2014. They share four children: North, 8, Saint, 5, Chicago, 3, and Psalm, 2.