Instagram boyfriend?! Kim Kardashian shared a very steamy bikini picture from her trip to the Bahamas and fans are convinced that Pete Davidson was the man behind the camera.

The 41-year-old Skims founder posted a trio of sexy photos on Monday, January 17, and didn’t take long before her followers pointed out that there was a peculiar shadow of a man holding an iPhone showing up in the sand.

“The shadow is Pete we all agree, right?” a user questioned, while another joked, “Me zooming in to see if that is Pete.” Someone else quipped, “Tell Pete to not get a shadow next time.”

Of course, others made sure to call out the reality star’s adorable cream-colored bikini and phenomenal figure. Rest assured, there was no shortage of fire emojis in comments section. 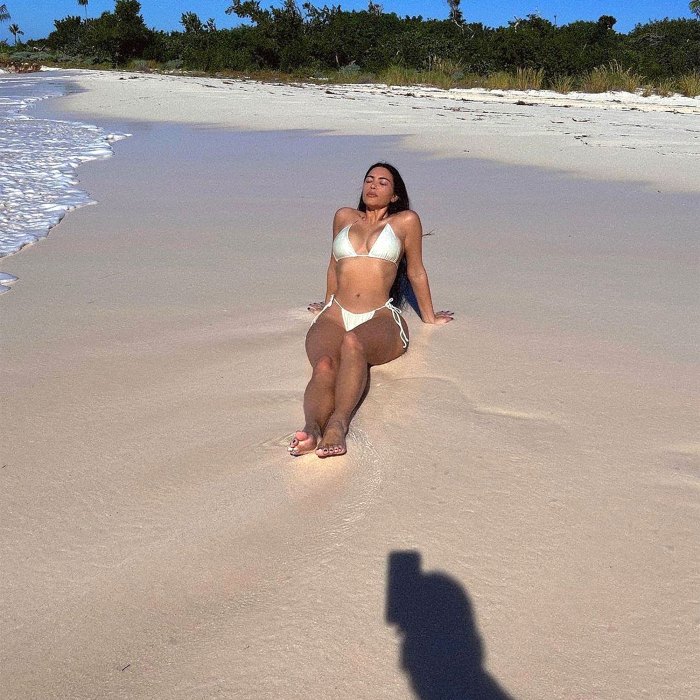 The throwback pictures are from Kardashian and the 28-year-old SNL comedian’s little getaway earlier this month. They enjoyed a few days in the Bahamas along with friends Simon Huck and Phil Riportella.

While the Keeping Up With the Kardashians alum has dropped a handful of images from the sun-soaked trip, she has yet to share a picture of her with her new romance.

While Davidson hasn’t made an official debut on the mom of four’s ‘gram, it’s safe to say that fans are on the lookout. When Kardashian shared a sexy selfie of herself in a little brown bikini during the pari’s vacations, fans were most concerned with The King of Staten Island star’s whereabouts.

“We want Pete content,” a user wrote, while someone else said, “Are you going to post a pic with Pete we know you’re there with him?!”

The fashion designer and actor were first linked in October 2021 following Kardashian’s guest hosting gig on Saturday Night Live. In the months that followed, the pair began heating up. They’ve been spotted going to Staten Island movie nights as well as dinner dates in New York City and California.

“Kim and Pete are getting serious,” an insider exclusively told Us Weekly in December 2021. “Things have escalated quickly but in a healthy, fun way. Right now, they are just enjoying their time together and seeing where things go.”

Kardashian’s romance with Davidson follows her February 2021 split with Kanye West. The pair were married for six years and share children North, Saint, Chicago and Psalm. West, for his part, has been dating Uncut Gems star Julia Fox.