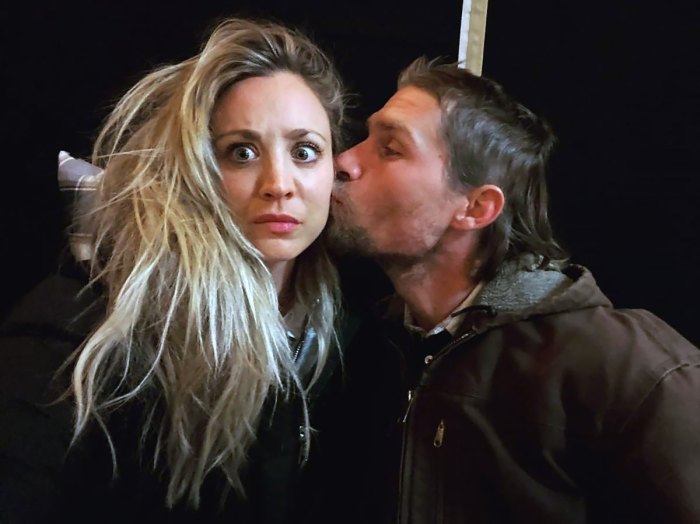 Too funny! Kaley Cuoco is not a fan of her husband Karl Cook’s new haircut.

On Thursday, January 21, the actress, 35, shared a picture of her hubby kissing her on the cheek as she sports a very concerned look. The reason for this worried glare? Cook’s new mullet chop.

“I don’t remember saying ‘in sickness and health oh and mullets,’” she hilariously wrote in the accompanying caption.

Fans flooded the comments joking and laughing at the ‘do, including family friend Mavis Spencer. “Saw @mrtankcook and when I asked how he was doing he said ‘still married’ and took his helmet off for a second…,” she commented. “You are a GOOD WOMAN!! ??‍♀️”

Meanwhile, Young Sheldon actress Annie Potts has a solution. “Cut it whilst he sleeps dear… ?”

The mullet made a big comeback in 2020. It wasn’t just guys like Blake Shelton and Brooks Laich who debuted the look last year, but female A-listers such as Rihanna and Miley Cyrus also rocked a choppy party-in-the-back style.

In fact, the former Disney Channel star revealed she always knew the mullet would be trendy again. In May Cyrus posted an old video on Instagram of herself talking to a reporter about it. Even though she has her long wavy Hannah Montana hair, she told the journalist, “You know what, it’s kind of, like, getting in again. Like if it’s edgy and spiky, it’s actually kind of cool. I think it’s actually starting to come back.”

She wrote in the caption, “The mullet is officially back when ‘08 Miley says so….. perioTTTTT.” So there you have it! Even if the Big Bang Theory star doesn’t like her husband’s strands, Cyrus says it’s cool and always will be.

Another celeb known for sporting a mullet hairstyle is Billie Eilish. However, hers came to be totally by mistake.

When attending the LACMA Art + Film Gala in November 2020, the “Bad Guy” singer showed off a mullet version of her rooty green hair. When a TMZ reporter asked her about it later she responded, “You know what happened? Somebody dyed my hair and they burnt half of it off and now it looks like a mullet. That s–t is not on purpose though.”

We have to admit, we were kinda disappointed to hear it was a mishap. After all, the edgy style totally works with her overall aesthetic. But hey, to each their own!

Gingham is back! Zara McDermott to Jessica Wright go wild for the trend & you can get the look from just £2

What is Holly Willoughby’s net worth and how much is she paid for hosting This Morning?

Welcome back! Your guide to shopping safely