Forbidden from facials. Britney Spears revealed that during her Las Vegas residency, which ran from 2013 to 2017, she was banned from stepping into the spa.

“People don’t know this, but when I did Vegas, I was never allowed to go to the spa,” the 40-year-old singer revealed in a Tuesday, January 25, Instagram post. “They didn’t want me having coffee or tea, so my friends from home would show up going to the spas drinking champagne no lie and I was the loser working and entertaining them at night … doesn’t sound like a good deal to me either !!!!”

Spears, who had her 13-year-long conservatorship end in November 2021, also had to follow certain rules when it came to her on-stage costumes. 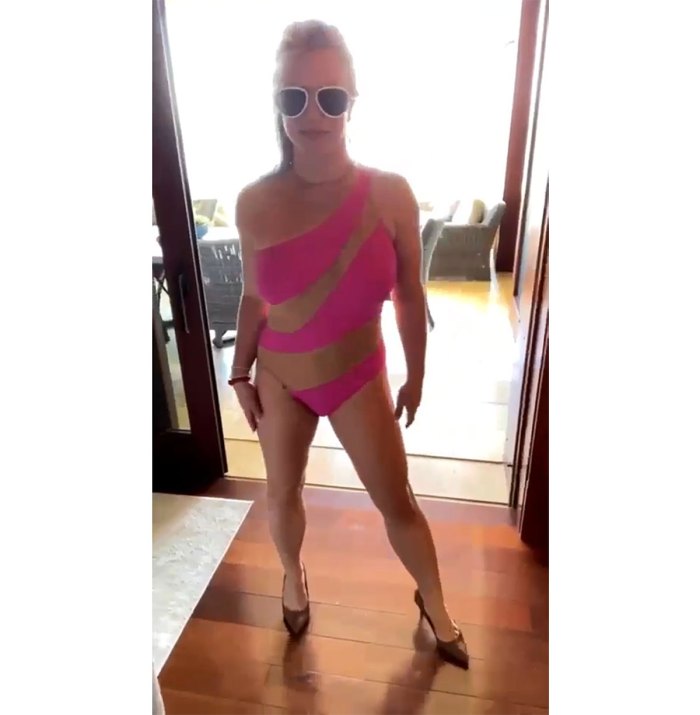 “I had to wear two layers of tights every night,” she explained. “The one night I cheated and said NO and didn’t cover my legs, I swear I danced and moved way faster with nothing on them.”

Given that the “Circus” singer is currently soaking up the sun with fiancé Sam Asghari in Hawaii, she’s jumping on the chance to dance around in tight-free ensembles. In the same caption, Spears explained that it’s “cool” to see her legs “raw” in her hot pink one-piece.

The singer’s fans wasted no time jumping into the comments section, encouraging the star to take advantage of the spa and rock tight-less costumes as much as she wants.

“Hope you go to the spa every day for the rest of your life if you want to,” a user wrote, while Heather McMahan said, “No spa day???? Or coffee??? Show those legs girl!!”

Others made a point to call out the “Lucky” singer’s adorable swimsuit. “Always beautiful in pink,” a user commented, while another chimed in, “Ok but this swimsuit is cut af friend!!! Go off.”

While Spears noted that her pink one-piece is “expensive,” she’s also a huge fan of reasonably-priced bikinis from Target. Earlier this week, she showed off a yellow plaid number from the retailer.

She previously professed her love for Target’s swimwear in August 2021. “My favorite new baby blue bathing suit I wore in Maui is from @Target 🎯… girls, you gotta go there cause their suits are bomb💣👙!!!! Psss I’m going to be 40 this year and as Debbie say in This Is 40 … I’m not ready to shop at old lady stores😂😂😂!!!” she captioned an Instagram post at the time.