Not only is her hair color different, but “The Happier Than Ever” singer also went shorter, opting for what appears to be a cool, cropped wolf cut.

The 19-year-old took to Instagram to show her near-100 million followers the fresh ‘do on Thursday, December 3. She snapped a selfie from up above to give them a good look at the new style, which features piecey bangs and shaggy layers.

She captioned the pic, “Miss me?” 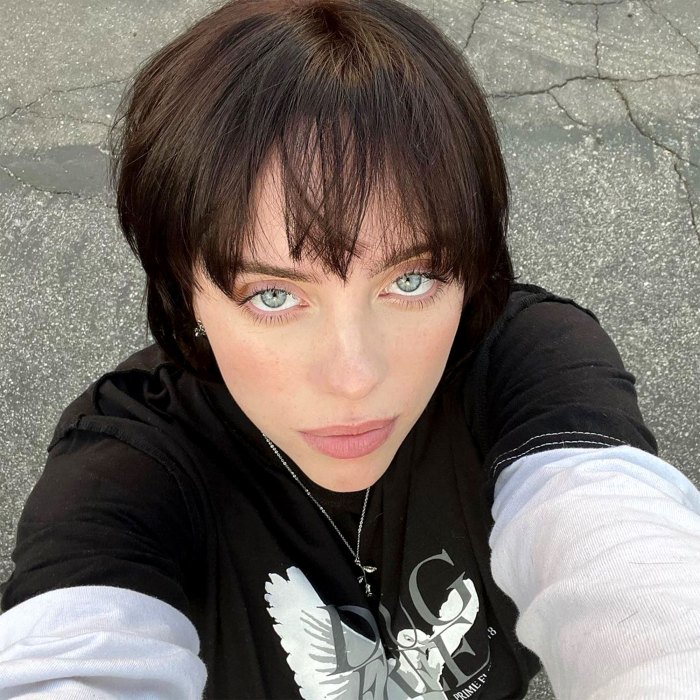 Celebs and fans alike flocked to the comments section, including Olivia Rodrigo, who wrote, “OMG.”

But, of course, some fans aren’t ready to say goodbye to Eilish’s blonde mane. “THE BLONDE ERA IS OVER ???” one person wrote, adding a bunch of sad faces at the end. Another commented, “YOU JUST WENT BLONDE YOU CANT DO THIS TO ME.”

Eilish famously went blonde at the start of the year, ditching her signature black and neon green hair. She quite literally broke the internet when she first debuted it in March. In a matter of minutes, the photo she shared to Instagram became one of the most-liked photos in the social media platform’s history.

In September, the star told Elle that the reason she went blonde because she “wanted anonymity.”

“I couldn’t go anywhere with that hair because it was so obviously me,” she told the outlet. “I wanted anonymity.”

Even after dyeing her hair, going out and doing normal activities still made her nervous. “I went to a park with a friend, and I was like, ‘No, I can’t take off my hood,’” she recalled.

“I was terrified of the paparazzi and these stalkers I’ve had. But my friend was like, ‘Don’t worry: You’re okay. Nothing’s gonna happen.’ And I took my hood off, and I felt like a new person.”

The process to becoming a blonde beauty however was pretty lengthy. All in all, the transformation took around six weeks. To keep the whole thing under wraps until she was ready to reveal the final version, Eilish had to wear a wig for nearly two months.

“January 16th was the first day [of color] and then it was two weeks of nothing — of healing, letting my hair take it in, digest and recover,” the star said during a May interview on The Ellen DeGeneres Show.

Do the math and it quickly became clear that Eilish actually wore a wig to the Grammy Awards in March, covering the wig line with a Gucci jacquard-print bucket hat.

Eboni K. Williams Opens Up About Struggle With ‘Severe’ Acne