The Batman star Zoe Kravitz had audiences in stitches as she introduced Saturday Night Live with a star-studded opening monologue.

Zoe, 33, plays Catwoman in the major blockbuster, which has enjoyed a massive opening week since its release on March 4.

The actress stars alongside other big names including Robert Pattinson as the brooding caped crusader, Paul Dano as iconic villain The Riddler, and Colin Farrell as The Penguin.

Having been firmly in the spotlight in the lead-up to The Batman’s release, this weekend Zoe took to the stage on Saturday Night Live where she introduced the show with the traditional opening monologue.

As tends to happen in SNL however, all did not quite go to plan, as the actress was ambushed by a bunch of other Catwomen from down through the years – well, sort of.

Seconds into her monologue, after Zoe got in a playful dig at Joaquin Phoenix’s Joker, Kate McKinnon appeared on stage dressed as Michelle Pfeiffer’s iconic leather-clad Catwoman.

‘I’m Catwoman from the nineties!’ Kate announced. ‘The one with the whip – you know, like cats have.’

She told Zoe she was from ‘a proud lineage of Catwomen, each with their own origin story,’ before detailing her own: ‘I fell out of a window on to a pile of cats.’

Katewoman (see what we did there?) then lit up the Cat Signal, which led to Ego Nwodim, dressed as Eartha Kitt’s ’60s TV series Catwoman stalking on to the stage.

Ego poked fun at the beloved, famously camp series which starred Adam West as the masked hero, and just as Zoe was attempting to get back to her monologue she was interrupted once more. 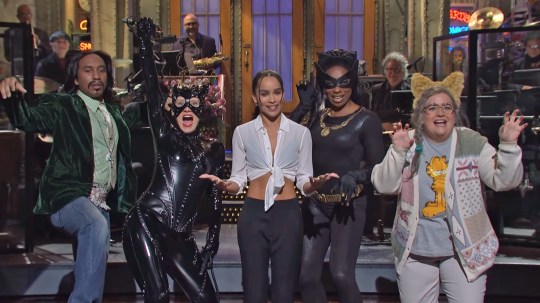 The actress was joined on stage by a clowder of cats (Yes, that’s what a group of cats is called) (Picture: NBC )

This time, it wasn’t exactly a Catwoman, but a ‘cat lady’, played by Aidy Bryant, who wore a Garfield t-shirt, cat ears and pushed a fluffy white cat around in a trolley.

Comedian Chris Redd then derailed Zoe’s monologue even further as he appeared in character as Katt Williams, which Zoe appeared to agree was jumping the shark as she declared: ‘Oh come on, you’re not even a woman.’

The live audience whooped and cheered as Zoe finally got round to introducing the programme, promising fans a ‘great show’, which included an appearance by singer Rosalía.

Big Little Lies star Zoe has been praised for her exceptional acting in the three-hour-long film, and recently opened up on her unique ‘method acting’ to get into the character.

During an appearance on Tonight Show With Jimmy Fallon in early March, the host considered the ways he would have prepared for the role of Catwoman, joking he could ‘drink milk out of a bowl’.

Zoe confessed ‘I did that,’ to which Jimmy quipped, ‘You did not!’ 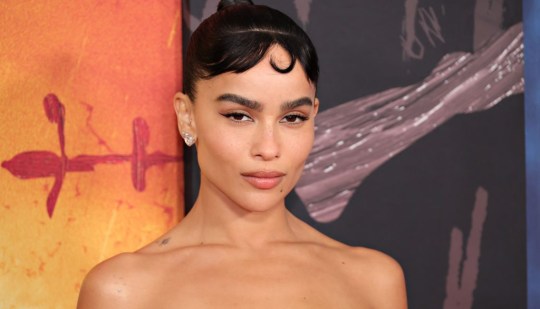 The actress then insisted: ‘I did.’

Stunned, Jimmy replied: ‘You drank milk out of a bowl?’

The Batman is out in cinemas now.