Growing pains. Zac Clark and Tayshia Adams have faced split rumors more than once since The Bachelorette ended, and while he confessed it was not always smooth sailing for them after their reality romance aired, they stuck it out amid the tough times.

“Naturally, it’s for all the reasons that people say it shouldn’t work. Because it’s so quick and all that stuff. And I hear that. There’s also a lot of reasons why, for me, it does work,” the addiction specialist, 37, exclusively told Us Weekly on Thursday, April 8, while discussing the Goggins Challenge. “’Cause you put the cell phone down, there’s no distractions, your conversations are very, like, pointed and structured and you really give yourself — like, for me, I gave myself that opportunity to kind of really explore what love was and what this relationship could be.” 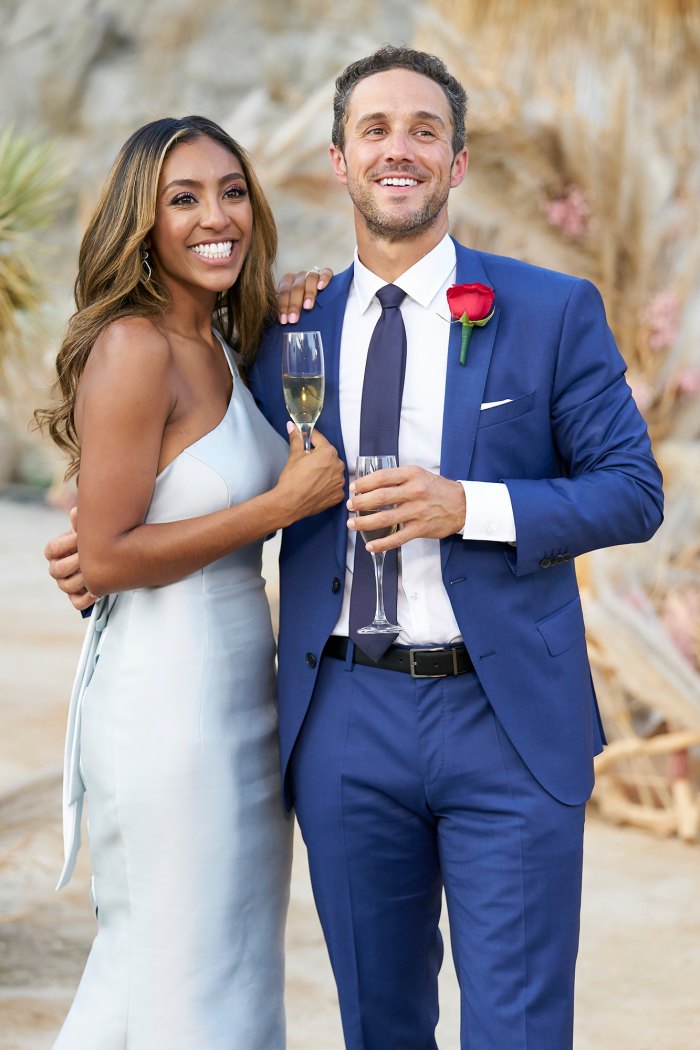 Although the process worked during filming, Clark and Adams, 30, had to make some adjustments in the real world. “Coming out of that, I think we had a strong foundation, and then it’s about, like, digging in together and getting to know each other and understanding each other’s lives,” he explained. “We’re both passionate, driven, busy human beings. And with that, we need to remind ourselves to work each other into it and we’ve done [that]. So yeah, a couple months after, there was some ups and downs, of course, and, like, well-documented, but at the end of the day, it’s all good right now.”

The couple got engaged during the season 16 finale of The Bachelorette, which aired in December 2020. Since then, their relationship has faced scrutiny from fans, but Clark has learned to tune out the noise.

“I know that at the end of the day, there’s our relationship, me and her, and then there’s everything else kind of around it. And if this isn’t solid, which it is, then this stuff can kind of work itself into it,” the philanthropist told Us. “But it is solid. And at the end of the day, none of that other stuff really, truly matters. I think you need to be aware and I think you need to acknowledge that it could be difficult … but no, that’s why we have each other to support us through those difficult times or whatever it might be.”

Adams denied split rumors in March, insisting via her Instagram Story that “everything is good” between the reality stars. “Not gonna lie, I don’t like getting DMs putting this weird energy into the universe lol,” she wrote at the time. “I love that there’s so much love and support around our relationship but please don’t put unnecessary rumors/pressure on us.”

Clark told Us on Thursday that he has only found more things to love about the Bachelor alum since wrapping the show. “[The] most surprising thing that I’ve learned about Tayshia since the show, she’s funny. I mean, she’s funny. She doesn’t think she makes me laugh, but I actually do. I laugh at her, and she just doesn’t know it,” he said. “She loves sweets. She’ll try and pawn that off on me, but she definitely loves sweets. And she really cares. She really cares about other people, and she feels things, like, tremendously. And that’s something that I really appreciate about her.”

While Adams is filming season 17 of The Bachelorette alongside cohost Kaitlyn Bristowe, the entrepreneur has taken on a new mission: the Goggins Challenge. He will run four miles every four hours from Friday, April 9, through Sunday, April 11, in New York City to raise money for the Release Recovery Foundation, a nonprofit he cofounded that is dedicated to providing scholarships to individuals who suffer from mental illness and substance abuse.

“We’re doing it all to raise awareness and money and build community around mental illness and addiction so that people can understand that there’s help available. And that this life is not a punishment,” Clark said. “Personally, I went through some of my own, and it’s well-documented and well-publicized and it’s out there. So it’s not something that I shy away from. And for me, it’s the greatest thing that ever happened to me. And if I can be some type of representation of the life that is available to those who are currently struggling this weekend, then I’ve hit the jackpot.”