It feels almost sacrilegious to write this in NME, but for modern teens, YouTubers are the new rockstars. Where generations of kids grew up dreaming of tearing the roof off a sold-out Wembley, for gen Zs, the new dream is standing alongside their favourite content creators. Thankfully, the UK is holding its own in this bold new world of content creation.

When it comes to us Brits leading the online revolution, there are few bigger icons than gaming YouTuber Ali A (real name Alastair Aiken). Starting uploading video clips on the platform as a way to show off his skills in Wii football classic, Mario Kart Strikers, Ali A slowly built himself an online empire. Graduating to Call Of Duty and Fortnite, he now boasts billions of views and 17.5million subscribers. As I greet a smiling and infectiously upbeat Ali A at London gaming festival, W.A.S.D, he reflects on the graft it’s taken him to get here – and how, with his new YouTube talent show, he’s hoping to give back.

Launching a new YouTube Shorts series called uTure – Future without the F, as Ali is keen to point out – Ali’s ‘YouTube’s got talent- esque competition show is the first of its kind. Over 10 episodes, judges dish out a series of tasks to ten contestants, as they foster the next generation of ‘Tuber talent.

“10 people will make it onto the show, trying to win a $100,000 [£76,247] prize, which is just incredible” Ali A explains with a grin. “Anyone all over the world can create a YouTube short and apply, then we will be starting the show early June. There’ll be post-show support as well put in place, to make sure that it’s not a case of “well done, you’ve won the show here’s some money” It’s a lot bigger than that. We are also offering up facilities and learning tools for anyone that’s not on the show that wants to get into the creation space as well, which is really exciting.”

When Ali A started uploading videos between his GCSE classes, there was no such guide to YouTube stardom. Finding it almost impossible to earn money as one of the lone pioneers in an early YouTube Wild West, Ali A is passionate about giving a new generation the helping hand he never had.

“There was a point where I didn’t have a following online and other people that had 1000s of subscribers, and I was like, it’d be so cool to have this following! And then to have it and grow into what it is today…it is a very fortunate position to be in,” he reflects with a smile.

The goal is to have two channels with 10 Million, slowly but surely getting there. Thank you! pic.twitter.com/kSbBL6l4G2

“When I’m recording my videos, and I’m talking about my journey and where it started, I always think there will be someone watching this video that will end up with a lot of subscribers,” explains Ali, “I see uTure as a chance to actually help accelerate that process with some guidance in place… To find those people and get them in front of some of the biggest YouTubers in the world.”

Teaming up with an Avengers-esque squad of YouTube talent, the show’s judges include global megastars like DanTDM, LilSimsie and Lazarbeam. To put their popularity into perspective, combined, the 10 judges have over 150million subscribers. While there can only be one winner, thanks to the size of the judges attached, anyone who makes it onto the show will undoubtedly get their name seen by a huge number of eyeballs.

While generations of the past may have coveted an internship at say, the BBC, for gen Zs, this probably sounds more like an archaic chore than the opportunity of a lifetime.

“I’ve never really followed mainstream celebrities;” admits Ali A with a shrug, “I think I’ve been so engrossed in YouTube that I’ve always followed content creators within the space that I’m in. I’d say my generation was the first to start to spend more time watching content online. And now, kids come home from school and watch loads of YouTubers. It’s how they consume their video content, they’ve long moved on from traditional TV.”

While people in their 30s and 40s may fail to understand the unstoppable rise of the YouTuber, for Ali A, the appeal is simple. “You get a different connection between a content creator online and a traditional celebrity,” Ali says, “I think that’s partly why content creators on YouTube and influencers do so well. You can have such a close connection with them through the amount that they share. It feels more like a friend than necessarily this person that’s on a pedestal, like you know – a traditional mainstream celebrity or musician of the past.”

Yet with this particular modern rock star you won’t find any public outbursts of anarchy.
While Ali-A made his name making Call Of Duty videos, his pivot to Fortnite and Minecraft has slowly seen his audience skewing younger and younger. For Ali, he takes his responsibility as a role model seriously, making a conscious effort to keep things upbeat, approachable and U-rated. As Spider-Man’s uncle and possibly part-time YouTube legend Uncle Ben once said “with great power comes great responsibility”.

Huge thank you to all the incredible creators involved with @utureshow ! 🙏🏻💙

Just look at this lineup! 🤯 pic.twitter.com/EYUFO1NjFI

“I think if you go through my socials and everything I say, online, it’s all just a positive message and a positive impact and me being happy. knowing that I’ve got that younger audience. I obviously don’t swear on my channels, which I think is really important. I don’t think there’s any need for it, it doesn’t bring anything to my content. Ultimately, they’re tuning in to get an entertaining piece of content, and I want to make sure they come away feeling better from it.”

It’s why for Ali, the idea behind uTure isn’t just a glitzy talent show – it’s a place for a misunderstood generation to feel heard:

“Even if you don’t make it as a winner on uTure, it’s the skills you learn in that process that are transferable. For this kind of community, it’s all about helping them build their confidence. Without YouTube I wouldn’t be anywhere near as confident as I am. If uTure does get as big as we hope, this is going to be a global kind of youth community that we’re able to hear and interact with… it’s very rare that people of that age feel like their voices are heard.” 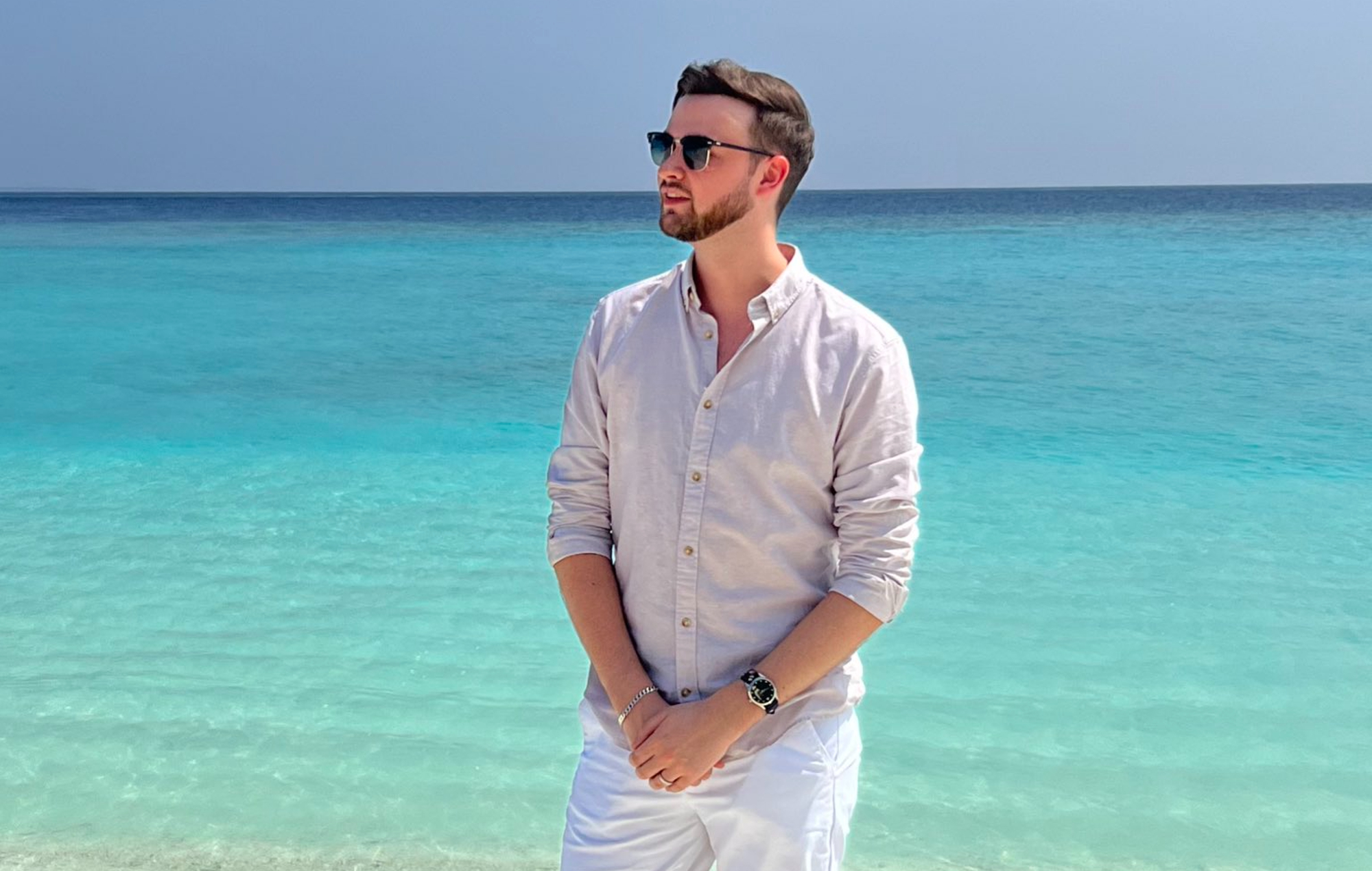 It turns out, no one is as surprised by Ali’s fame as he is. Originally wanting to head to uni to pursue a degree in maths, his sudden rise in popularity saw this strange new video platform blossom into an unmissable career opportunity. His parents were of course, sceptical, but after a low key family holiday he and his family began to realise just how big Ali’s audience had become.

“I didn’t always put my face in my videos, so for quite a while it was just my voice and whatever game I was playing,” explains Ali,” Once he did, however, things really began to pick up steam.

“I think when I started to get recognised more and more, that was like a really big like, wow moment for me. I remember I went on a family holiday with my parents and my brother to Spain. I didn’t even have that big of a following back then, and I was in a restaurant in the middle of nowhere, sat outside, when this kid comes up to me and says, ‘Ah, are you Ali?’” I’m on holiday in the middle of nowhere, thinking, this is absolutely crazy!”

After @omgitsalia helps you create a #YouTubeShorts for your uTure application, you’re one step closer to becoming the next big gaming creator 😎 Learn more → https://t.co/uiVMbR9kag pic.twitter.com/NBs473oNNO

Despite how easy Ali A’s laid-back approach may make his job seem, the YouTube star is one of the hardest working in the biz. Uploading at least a video a day across his three main channels while also creating custom content across Tik Tok, Snapchat, Twitter and Instagram, it’s a career that has slowly consumed almost every facet of Ali’s life.

“It’s a lot of hard work, but I feel very grateful,” says a visibly tired Ali. “The possibilities of having a bigger audience comes with a lot of responsibility and a lot of learnings, everything from, you know, earning money, to having a social presence, building your brand, balancing your time, there are so many angles to it.”

Still, for Ali it’s meeting the many many fans that makes the job worth the graft. “ I’m fortunate enough to travel all over the world for a lot of gaming events, and different things that I do and meet people everywhere. It’s honestly just incredible. As long as I’m nice to fans, they’re always nice to me… it’s just like meeting someone that supports me. So I’m always really appreciative of it.”

If you’d like to read more about uTure, you can read more here.