forget what Forrest Gump said. Life is not like a box of chocolates but rather boxes of everything. There are many events in life that can be said to be universal to varying degrees but I’d wager one that everyone has experienced at least once in their life if not multiple times is the ordeal of moving and packing your life into boxes. It’s for this reason that Unpacking should resonate with anyone.

Fortunately, developer Witch Beam has cut out all the stress and hassle – not to mention daylight robbery fees – that comes with moving and instead focuses on the ritual of settling into a new home through the act of unpacking and putting possessions in their rightful place. It’s all done in a surprisingly chilled manner, reinforced by the homey pixel art and charming soundtrack, while at the same time surprising you with a quietly but emotionally affecting story.

While you’re told the year of when each scene takes place, there’s otherwise virtually no text. Instead, the story is told through the rooms of a house or apartment you find yourself in, and whatever is in your boxes. The beauty is that you don’t know what’s inside these boxes until you click on the box, although as you progress from just unpacking for a bedroom to a whole apartment, boxes are usually grouped in the relevant category. Once you take something out, it’s up to you to figure out where it goes. Should it take a prominent display, dumped into your desk drawer, or perhaps tucked away as a secret under your pillow?

Do you carefully consider where a toy figurine goes only to have a few more vying for space and attention? Or perhaps why not take out everything in one go, leave them strewn on the floor and only then group things together? To give a flavour of the hectic process of moving, you might even occasionally find some items mixed up in other boxes, such as finding a pair of shoes in the boxes for the bathroom.

Although you have a save file that requires you to put your name on a photo album, and you have some degree of freedom over where to put items, this isn’t meant to be as expressive and customisable as decorating your own house in Animal Crossing. This is fundamentally someone else’s story and these possessions are theirs, but what makes Unpacking wonderful is how this story is told quite literally through each item, no matter how mundane, offering a glimpse into the offscreen character’s life.

Across different scenes in different years, you’ll notice familiar possessions like a favourite stuffed toy that’s been kept perhaps for sentiment, while new gadgets acquired or others don’t pass the test of time. One rather delightful running theme is the accumulation of Nintendo consoles and games – not officially of course, but the pixel art detail is such that you can even recognise some of the game cases – which would make Unpacking arguably the best fit for the Nintendo Switch, even if it feels so instinctive to click each item with a mouse.

Besides the fun stuff, subsequent settings also convey an adjustment to adulthood, as possessions begin to include more grown-up things like document folders and ledgers, basic kitchen utensils, and toiletries. I think it’s also key that none of these items are labelled with any text – it feels like a genuine part of adulting as you try to figure out all these basic household items that are taken for granted.

A good thing then, is that the pixel art for the hundreds of items you see in Unpacking are all recognisable, and even if you still never figure out what this box or that canister actually contains, over time you’ll at least know if it belongs in the bathroom or the bedroom. Extra details are also welcome, such as how a folded shirt will change to hanging on a clothes hanger, or the way a fully unpacked box neatly folds itself out of existence. What deserves a special mention is exquisite foley for each item you can hear when putting down an item. You might be forgiven for not recognising a bundle of cutlery at first glance, but once you hear that clang of metal it’s unmistakable. 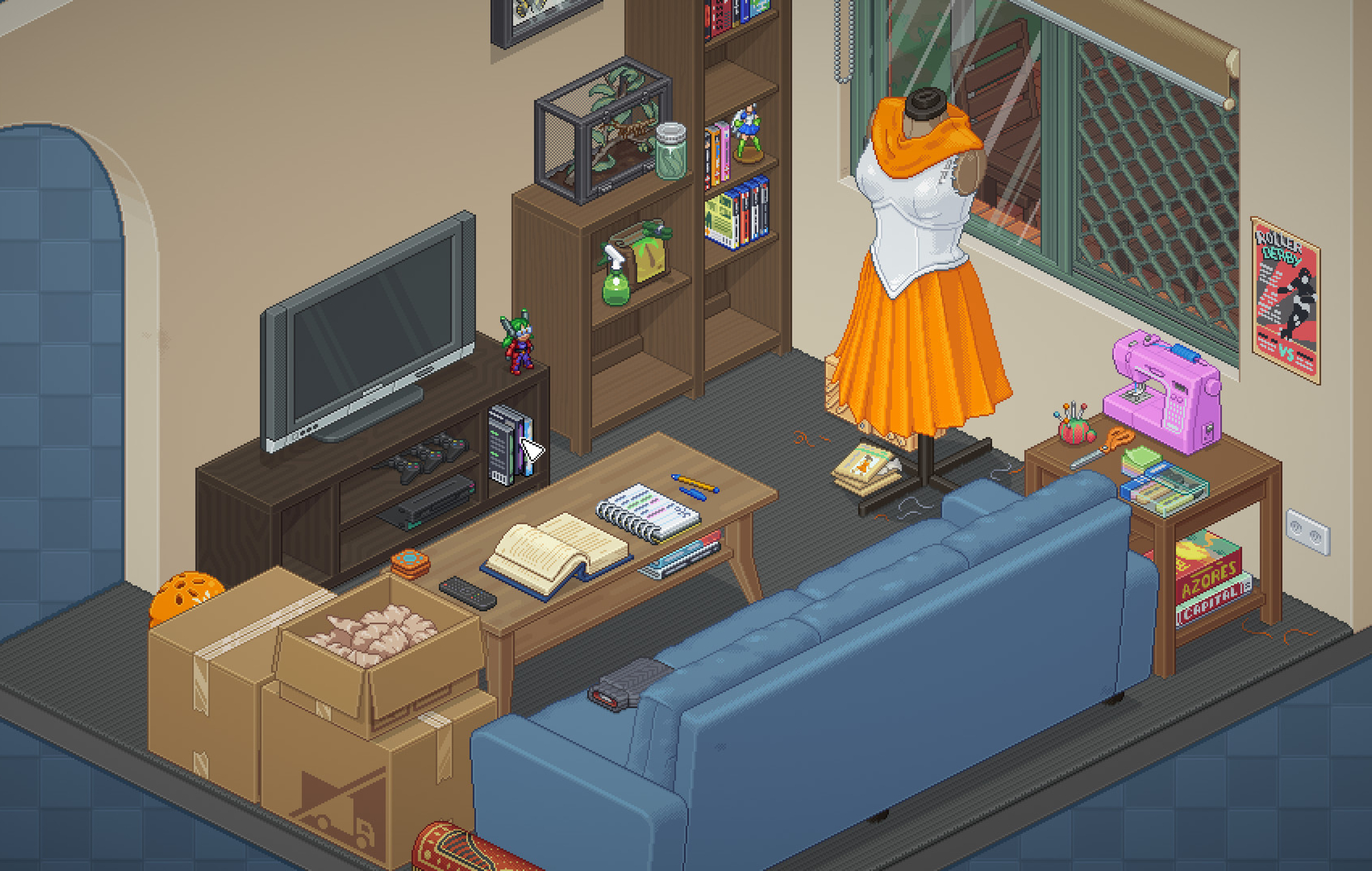 Having so many boxes to unpack across multiple rooms can feel overwhelming, sort of like the opposite of blank canvas syndrome, but as you get into it the act of tidying becomes very therapeutic, as another placed object is another step to making each room feel more like home. The fact you can just take your time also means there’s no real pressure or challenge. Perhaps the one element that might feel a bit forced is that certain items need go in specific places in order to complete the segment, and when everything has been unpacked, incorrectly placed items are highlighted with a red outline until you’ve figured out where they should go, sometimes requiring rejigging the stuff you’ve already sorted. It can feel a bit arbitrary at times – and who’s to say I shouldn’t have any crockery in my bedroom? – though fortunately, this requirement can also be toggled off in the pleasantly robust accessibility options.

Where there is more of a challenge comes narratively when you’re sharing a living space with other people, parsing the best place to squeeze in your possessions to feel like you belong there, and seeing whether or not other people’s belongings can take another spot. I won’t elaborate much further because the wonderful arc of how this person’s life and circumstances changes is crucial for discovering yourself. Suffice to say that it’s almost certain to have an emotional impact, potentially hitting differently for each person.

For me, it was the sad realisation that in my own time with house-sharing, I never got to experience living with like-minded individuals, nor did I ever have the luxury of a shared living space, not when greedy landlords turn living rooms into another bedroom to squeeze more rent. For some, these virtual isometric pixel living spaces may lead to envy, or perhaps hope that this is a life that you can make for yourself one day. Whatever your feelings, the afternoon or evening spent playing Unpacking might just make you appreciate that what you have isn’t simply just stuff.

Unpacking launches for PC, Nintendo Switch, and Xbox One November 2. Reviewed on PC.

Unpacking takes a simple and relatable task and turns it into a meditative and cosy experience that makes the art of environmental storytelling interactive. While the visuals, music and period items certainly make a tug for nostalgia, it’s the quietly revelatory story of the life whose possessions you’re unpacking, and the joy that it sparks, that makes it one of the best surprises of the year.