The Game has announced his retirement (Picture: WWE)

WWE legend Triple H has confirmed he will never wrestle again months after being hospitalised following a cardiac event.

The Game – whose real name is Paul Levesque – has revealed his in-ring career is officially over and he doesn’t want to risk anything on-screen following his health woes in September.

Speaking to Stephen A. Smith on ESPN’s First Take, he said he battled viral pneumonia and heart failure, and now has a defibrillator in his chest.

He said: ‘For me, as far as in-ring, I’m done. I will never wrestle again. I have a defibrillator in my chest, which it’s not a good idea for me zapped on live TV.’

His announcement comes after WWE revealed in early in September 2021 that the 14-time world champion had undergone a successful procedure following a cardiac event.

Triple H has now confirmed he was battling viral pneumonia with fluid in his lungs and around his heart.

As transcribed by Fightful, he explained: ‘They followed up on it, did an EKG. Basically, the way your heart pumps out, it’s 55 to 65 percent of your injection fracture is a good number.

‘I was in heart failure. Bad. By the next morning, as they figured that out in the evening, the next morning as I was setting in to get an MRI done and about to go in for a heart cap, my ejection fracture was down to 12.’ 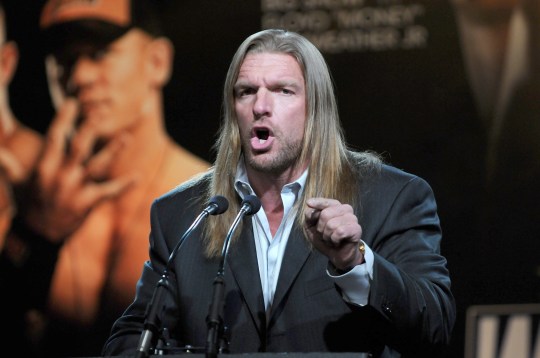 Triple H is one of the biggest names in WWE history (Picture: Stan Seymour/REX/Shutterstock) 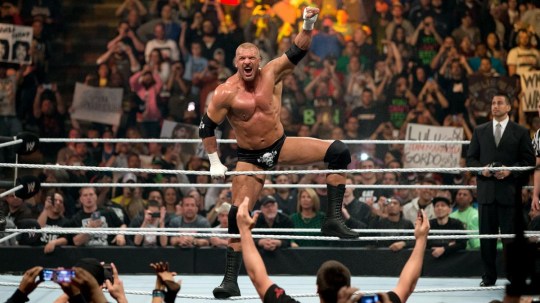 The Game has called time on his in-ring career (Picture: WWE)

The legendary star explained that his condition was ‘nose diving’ and he was fearing for his life.

‘Suddenly, I come home and I’m a little bit sick, and their dad, who is strong, always, suddenly is in the hospital. I don’t know if they understood the consequences of it, but there are moments in there when they are putting you out for stuff and you think, “Is this it? Do you wake up again?”

‘That’s tough to swallow. It makes you think differently about life. It doesn’t make you any less driven with the things you do, but it certainly makes you appreciate the things you have; your friends and your family.’

The wrestling legend is sure to be inducted into the Hall of Fame in his own right one day, while he’s already been honoured as a member of D-Generation X in 2019, and he boasts 14 world championship reigns, as well as runs with the Intercontinental, European and tag team titles.

His last official match was a tag team bout in 2019 when he appeared with Shinsuke Nakamura against Robert Roode and Samoa Joe in Japan, while his final televised match was against Randy Orton at Super ShowDown in 2019.