WWE didn’t want the daughter of the late, great Eddie Guerrero to use her family name.

The company wouldn’t let the Hall of Famer’s daughter Shaul carry on the famous surname – which carries with it a rich wrestling history – in case she couldn’t live up to such lofty standards.

Speaking on Insight with Chris Van Vliet, she said: ‘I remember being told – I’m not going to say by who – that “if you suck, we can’t drag your family’s name in the mud”.

‘I’m like [shocked expression]. I understood that. Again, it’s like they never said I had to be as good as my dad, but there was always little things like that which are hard to ignore. That was day one.’

Shaul – who was signed to WWE from 2010 to 2014 and appeared in FCW and NXT as Raquel Diaz – admitted she does feel the pressure from her father’s legacy.

‘I don’t know how he was Eddie Guerrero half of the time. My dad loved this business so much, he was constantly thinking about wrestling. No one can be him,’ she admitted.

‘It was getting overwhelming in good ways. I think when I announced my comeback, I was getting a lot of bites from promoters, which was very humbling.

‘But they also wanted to put me in the very top positions, which I was like “I haven’t wrestled in 6 years.” It was overwhelming.

‘When I first went into wrestling, I went into the largest and most prestige company in the world. I am very grateful for that, but that also comes with the biggest amount of pressure. 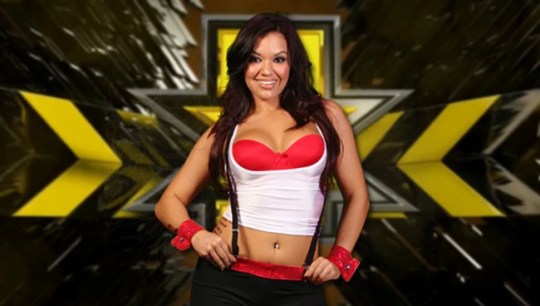 ‘It was so intense, not to mention the Guerrero way, go hard or go home. High expectations are just in the family. I was having panic attacks just going to training sessions.’

Meanwhile, the 30-year-old star – who has also made her name as a burlesque performer – previously revealed WWE own Eddie Guerrero’s name and image almost 16 years after his death in November 2005.

She told The Wrestling Inc. Daily podcast: ‘I think we have to be really careful with how we use people’s names and their likeness, especially after they’re gone. Dad, his real name was used, “Eddie Guerrero” is his legit name.

‘And WWE, to this day, still own the rights to his name. So we don’t have a say in anything.

‘Yeah, so make sure if you’re a young wrestler and you’re going to sign a contract, make sure you own the rights to your name.

‘That’s just some good, good advice. Any lawyer will tell you that. Make sure you own the rights to a character you come up with or your own likeness.’