Roman Reigns took things into his own hands (Picture: WWE)

Roman Reigns attacked Seth ‘Freakin’ Rollins on WWE SmackDown and ended up getting The Usos barred from ringside for the Universal Championship match at the Royal Rumble.

The Tribal Chief lost his cool in the main event and laid out his former friend, giving him as a win via disqualification which meant Jimmy and Jey can’t get involved in their title bout on January 29.

The night kicked off with The Bloodline heading to the ring as the Usos honoured their cousin’s 508th night as Universal Champion, leading into a phenomenal video acknowledging his accomplishments.

Reigns was about to speak before Rollins’ music hit and the Visionary came out on the stage before the Raw star trashed Roman’s legacy.

He called out the champ for sending The Usos to attack him on Raw earlier this week, and insisted they’re holding up his title ‘just like me and Mox did in The Shield’, in a nice nod to their former Shield teammate, known as Dean Ambrose before he left in April 2019.

Reigns got some digs in too – ‘Did John Cena write that promo for you? Are you gonna say the same stuff?’ – before Rollins proposed a tag match which would see Jimmy and Jey banned from ringside at the Rumble if he wins.

However, if he and his partner Kevin Owens – who came out during the show-opening segment – lost then the title match would be scrapped and Roman would take a vacation until WrestleMania 38 in April.

With high stakes and a heap of talent in the ring, the main event was fantastic as all four men delivered as you’d expect, with high-level energy and plenty of exciting action.

In the end, Roman stole Seth and KO’s thunder as he attacked with a Superman Punch just as they were on the cusp of winning clean, meaning The Usos lost but he was still centre stage.

Kofi Kingston wanted some revenge on Madcap Moss after last week’s loss, and he brought Raw star – and former WWE Champ – Big E for a New Day reunion as he offered some backup at ringside to counter Happy Corbin.

This week, Kofi got the win in a decent bout with the Trouble in Paradise, while E hit a Big Ending after the bell. 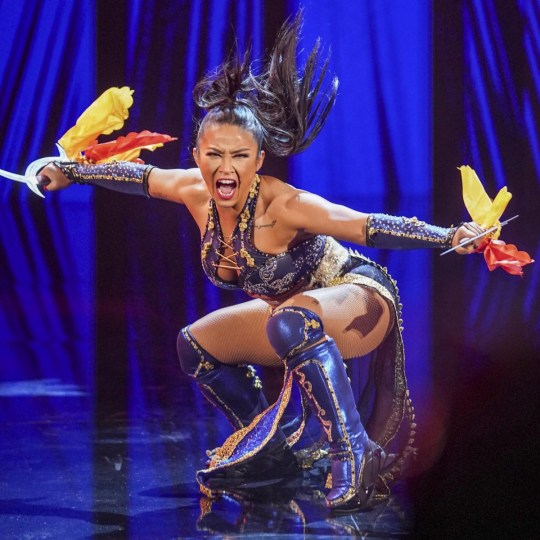 Xia Li was back to protect Aliyah (Picture: WWE)

Following her record breaking 3.17-second loss last week, Natalya looked to turn things around against Aliyah with Summer Rae watching from the crowd.

The Queen of Harts got disqualified after ignoring the ref’s warning about her attack in the corner, which she continued after the match until Xia Li made the save.

The Viking Raiders built some momentum for their eventual SmackDown Tag Team Title match against The Usos as they beat Los Lotharios in a fun clash.

The ongoing feud between Naomi and Sonya Deville continued, with the latter making herself the special guest referee for the Champion Contender match with Charlotte Flair. 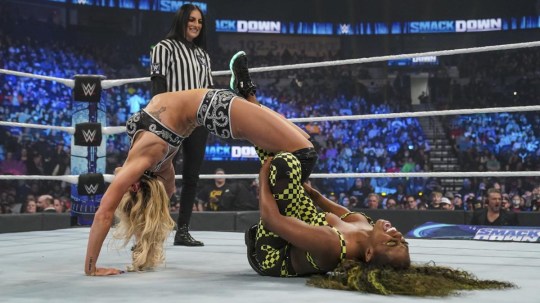 In scenes deliberately reminiscent of the Montreal Screwjob, the WWE Official called for the bell as the Queen was locking in the Figure Four, even though Naomi didn’t tap out.

Later on, Adam Pearce – who was seen chatting to Eric Bischoff – said he wanted Deville to face Naomi herself next week, and hopefully that will escalate a feud that has wavered a little over the past few months despite a lot of promise.

Sami Zayn looked to out-Jackass Johnny Knoxville by trying out some self-defense weapons, inculding a cattle prod with some terrible special effects.

Knoxville – who will be in the Royal Rumble match on January 29 – came to the ring and revealed the weapon wasn’t actually turned on, so he did just that and attacked the former IC Champ.

Sheamus had Ridge Holland at ringside but didn’t need his pal’s help as he made easy work of Ricochet in a very one-sided match.