The Hall of Famer attacked the Queen (Picture: WWE)

WWE legend Lita made her first SmackDown appearance in almost two decades and laid out Charlotte Flair to make an emphatic statement.

The Hall of Famer – who was recently confirmed for the 2022 Royal Rumble match alongside the likes of Mickie James, Summer Rae and the Bella Twins – received a great ovation from fans as she returned to the blue brand on Friday night.

She was joined by Michael Cole for a live in-ring interview as she insisted she has one last great run in her.

The Attitude Era pioneer staked her claim to win the Rumble later this month – something she never had the chance to do during her active career – and go onto headline WrestleMania.

However, SmackDown’s Women’s Champion Charlotte Flair interrupted and took issue with that, rubbishing the idea of a dream revival for the former Team Xtreme member.

The Queen pointed to her victory over Lita’s friend Trish Stratus back at SummerSlam 2019, saying she sent her pal back into retirement with the win.

The two stars traded verbal jabs until Lita had heard enough, laying out Flair with the Twist of Fate.

This was a fantastic was to bring Lita back into the fold and creative genuine intrigue heading into the Rumble on January 29.

Based on this evidence – and with both women being in the match – WWE could do worse than having the legend actually win the whole thing to set up a title bout with Flair at WrestleMania 38.

The night kicked off with The Usos, who introduced a Fatal 4 Way match to determine the next challengers for the SmackDown Tag Team Championships.

The Viking Raiders overcame the teams of Los Lotharios, Cesaro and Mansoor, and Jinder Mahal and Shanky in an entertaining clash with one really one credible winner.

Sami Zayn came out and addressed the Intercontinental Championship match he’s still owed against Shinsuke Nakamura, before turning his focus towards Johnny Knoxville. 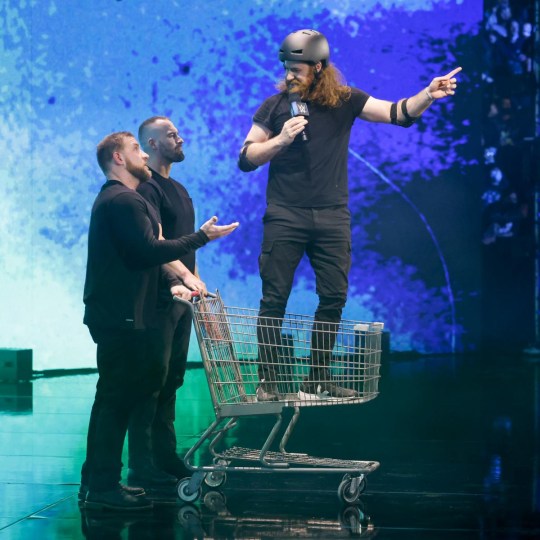 Sami wanted to try his hand at a Jackass-style stunt (Picture: WWE)

After he was humiliated by the Jackass star last week, Sami wanted to turn things on its head as he brilliantly quipped: ‘When it comes to being a jackass, no one is better than Sami Zayn.’

He introduced his own stunt show InZayn as he got wheeled out in a shopping trolley with the goal of being sent up a ramp, high over the ring, and down onto a target – at least that was the plan.

However, Rick Boogs distracted Sami from the stunt and left him open to a Kinshasa from Nakamura before Boogs – looking a lot like Rick Rude – threw him to the floor and onto the target. 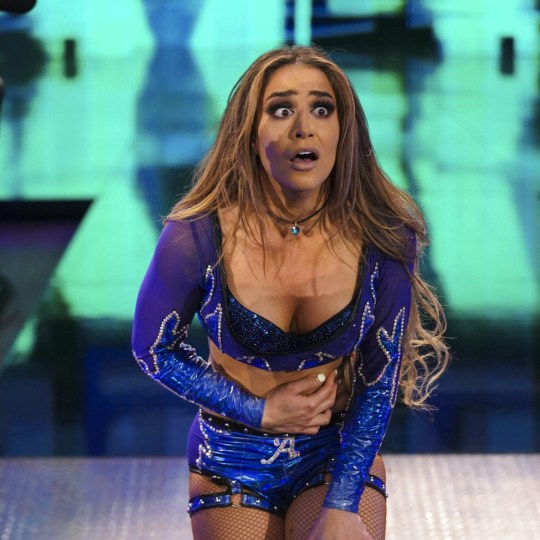 Aliyah was stunned by her lightning-fast victory (Picture: WWE)

Elsewhere, three-time Guinness Book of World Records holder Natalya faced Aliyah with the goal of breaking the record for the shortest WWE victory ever, which stood at 3.8 seconds.

She attacked the relative newcomer before the bell, but Aliyah was able to compete and rolled up the veteran for a 3.17-second win.

Sheamus got a measure of revenge on Ricochet for breaking his friend Ridge Holland’s nose at Day 1 as he beat the high-flying star in a fantastic bout as the stars put on a great showing before the Celtic Warrior secured the victory with a huge Brogue Kick. 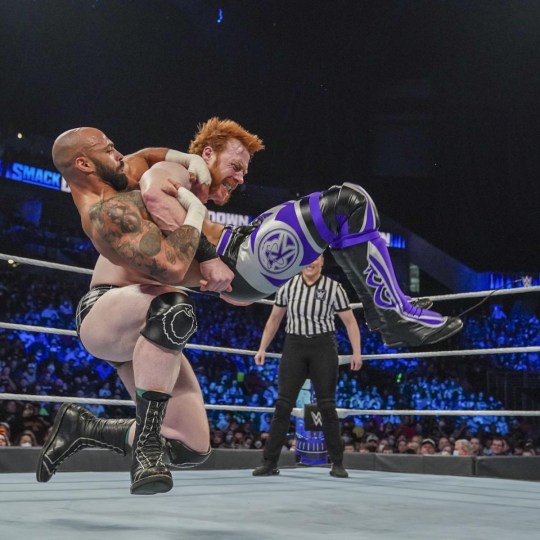 Sheamus and Ricochet were always going to have a great match together (Picture: WWE)

Meanwhile, Naomi and Sonya Deville continued their months-long rivalry as the former attacked the WWE official in her office before Adam Pearce interrupted.

In the end, the latter took Naomi’s side after Sonya claimed she wasn’t a major player in WWE, and booked her in a rematch against Charlotte Flair next week.

Kofi Kingston confirmed King Xavier Woods’ calf injury and said he will take his place in the Royal Rumble, before Madcap Moss and Happy Corbin came out to crack some jokes.

Unfortunately, Kofi’s subsequent match with Moss mainly took place during the ad break, with the pun-making villain picking up a massive win.

Finally, after plenty of hype during the night highlighting their careers beginning in The Shield, Seth Rollins and Roman Reigns met in the ring.

The pair were at their best on the mic as they build up to a bout that already has fans intrigued given their history.

The Visionary insisted her ‘created’ the Tribal Chief and has the ability to destroy him, while Roman had the zinger of the night as he said if he wanted to face a mega star from Raw, he’d have chosen Seth’s wife Becky Lynch.

In the end, Rollins escaped a sneak attack from Jimmy and Jey Uso, heading up the ramp and saying he’s living ‘rent-free’ in Roman’s head.