WWE legend Edge challenged Seth Rollins to a Hell in A Cell match on SmackDown as their epic rivalry comes to a head.

The Rated R Superstar was at his fiery best on Friday night’s show as he attacked the Drip King and revealed the stipulation as they enter the final chapter of their bitter story.

Earlier in the evening, Rollins had denied going too far last week when he went to Edge’s home while the Hall of Famer was in the ring miles away.

It took the rivalry to an event more personal level, although Seth defended his actions and demanded an answer to his challenge for one more match.

He warned Adam Pearce and Sonya Deville that there would be problems if Edge didn’t turn up by the end of the show.

In the main event segment, he taunted his foe repeatedly, until Edge was shown arriving and heading straight for the ring.

He hit Rollins with several Spears and turned to his trusty piece of the steel chair to choke him out.

Seth was able to escape, which is when Edge grabbed a mic and revealed they’ll be facing off inside Hell In A Cell.

Moments like this are exactly why some feel the stipulation-branded pay-per-views have run their course – this feels much more natural and exciting than building to match inside the structure just because its that time of year again.

Before we get to the mixed bag that was the first round of the King of the Ring and Queen’s Crown tournaments, SmackDown started in a thrilling way with Bianca Belair in the ring for the contract signing.

Becky Lynch had her own table on the ramp while Sasha Banks was confidently stood on the announce table as Sonya and Pearce failed to keep control.

Eventually, everything descended into an all-out brawl in the ring with the EST of WWE dumping the Legit Boss on the table and hitting a huge K.O.D. on Lynch through their Crown Jewel opponent – and the table. 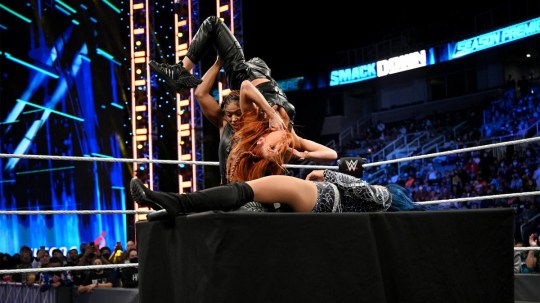 The EST of WWE stood tall over her rivals (Picture: WWE)

The first match of the night saw Rey Mysterio turned back the clock with a great bout against Sami Zayn to kick off the King of the Ring tournament.

The Great Liberator continues to play mind games with Rey and his son Dominik, and this continue tonight as the younger Mysterio accidentally cost his dad the match when he was trying to fix the exposed turnbuckle.

In contrast, the first ever Queen’s Crown tournament was a far, far too brief and sa Zelina Vega earn a very rare win at the expense of Toni Storm.

Paul Heyman was at his absolute best (Picture: WWE)

Roman Reigns was pleased with Paul Heyman for making sure The Usos remained on SmackDown in the draft, but he still wanted answers, with his special counsel saying he believed in the Tribal Chief.

Reigns urged Heyman to tell the Beast Incarnate he will lose at Crown Jewel, and Heyman was at his absolute best as he promised his former client he will lose to the Universal Champion.

Mace vowed to defeat everyone on the blue brand, before Carmella – with her protective mask – beat Liv Morgan in the Queen’s Crown tournament with another insultingly short match with the latter disappointingly falling at the first hurdle. 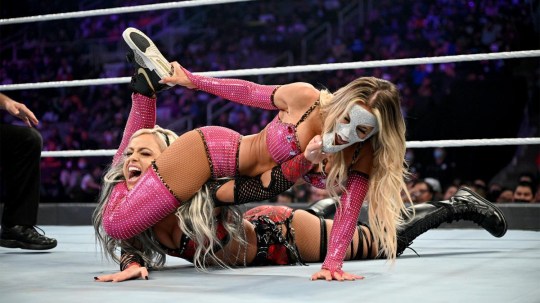 Carmella and Liv deserved more time – and the latter should have won (Picture: WWE)

Naomi wasn’t sure why she wasn’t included in the tournament, with Sonya Deville claiming she isn’t worthy before revealing she will make her in-ring return to face her next week.

Happy Corbin and Madcap Moss hosting another edition of Happy Talk but Kevin Owens came out to try and spoil the party,

He attacked Moss in the aisle before getting in the ring but the numbers game proved too much as the pair left him lying on the mat.

Back to King of the Ring, Finn Balor beat Cesaro in a fantastic match given plenty of time.

Either man deserved to progress and probably win the whole thing, although it would’ve been nice to see the Swiss Superman get his due.

The key to both tournaments succeeding is presenting them equally with competitive, lengthy matches – hopefully the Raw side of things improve on that on Monday.

*WWE SmackDown airs Friday nights at 1am on BT Sport 1.