WWE SmackDown was an eventful night as the first four rounds of the draft were announced as Brock Lesnar continued to target Roman Reigns and The Bloodline.

Fans saw some big moves with Charlotte Flair, Bianca Belair, Drew McIntyre and NXT’s Hit Row all changing shows, and the actual action more than delivered to make for an entertaining show.

Reigns – who was the first draft pick for SmackDown, with Charlotte Flair joining him on the blue brand as Raw chose Big E and Bianca Belair – came out to properly start the show.

He urged the crowd to acknowledge him before handing the mic to Paul Heyman, who hyped up the Tribal Chief’s win over The Demon at Extreme Rules.

He turned his attention to Brock Lesnar, and the Beast Incarnate made his way to the ring and things quickly descended into an all-out brawl.

He took the Universal Champ down with a suplex before doing the same to Jimmy and Jey Usos, eventually laying the twins out with F5s and standing tall in front of a hot crowd.

Later, Lesnar interrupted Kayla Braxton’s interview with Jeff Hardy to reveal that thanks to Paul Heyman, he’s a free agent and can go wherever he wants in the draft.

Meanwhile, Roman ordered Heyman his special counsel to go to Raw on Monday night to make sure The Usos remain on SmackDown.

He told his cousins to ‘leave him for dead’ if he fails, as he continues to really lean into the mafia boss character in the absolute best way.

The first match of the night saw Happy Corbin – after introducing the world to his friend Madcap Moss – beat Kevin Owens relatively clean, despite some distraction from Moss.

An End of Days, brilliantly renamed Happy Days by Michael Cole, on the outside came after some interference while another one in the ring was enough for the win.

Edge made his way to the ring after his move to Raw was announced, disappointingly showing no signs of being hurt despite being stretchered out just weeks ago. 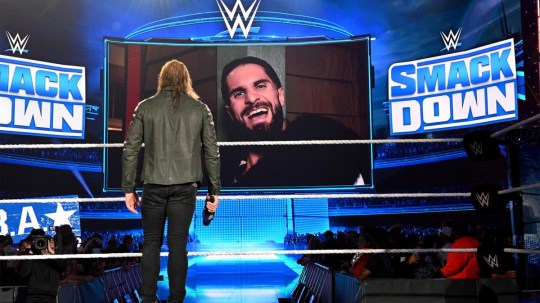 After addressing his change of brands, he dared Seth Rollins to come out and force him to retire, but the villain instead revealed he was outside Edge’s home in North Carolina.

He went in and started to make himself at home while taunting his rival, and even threatened to stay the night.

Backstage, Edge was seen trying to get hold of Beth Phoenix as he told her to get out of the house and go to her sister’s home, clearly scared for his family’s safety.

He also said ‘Daniel and David’ were heading to deal with Seth, which was a subtle reference to AEW tag team FTR and their real names (Cash Wheeler and Dax Harwood respectively), as they are close friends and live in the same neighbourhood. 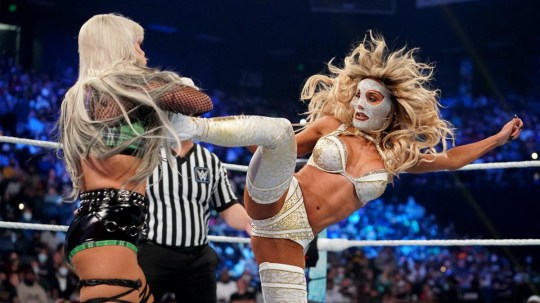 Liv Morgan and Carmella didn’t really get to have a match as the latter pulled out a mask to protect her face, and then laid out her rival as the feud rumbles on.

There was great eight-man tag team action as Alpha Academy (Chad Gable and Otis) teamed up with the Dirty Dawgs (Dolph Ziggler and Robert Roode) in a losing effort against The Street Profits (Montez Ford and Angelo Dawkins) and The New Day’s Kofi Kingston and Xavier Woods.

This was exactly what it needed to be, and gave New Day a solid win just after being drafted back to SmackDown.

Finally, the main event was a WrestleMania 37 rematch as Bianca Belair and Sasha Banks went to battle with Becky Lynch on commentary.

The match was fantastic, with the Legit Boss sneaking a win after The Man tripped the EST of WWE.

There was more to come though, with Charlotte Flair laying out Banks and Belair before she and Becky posed with their respective titles to end the show.

*WWE SmackDown airs Fridays at 1am on BT Sport 1. Tickets are available now for the final WWE Live UK shows of 2021 as the company returns in November for an-eight date run.