WWE superstar Ridge Holland is working on rediscovering his self-confidence after a horror accident left Big E with a broken neck.

The Yorkshire-born wrestler has been in regular contact with the New Day star – who doesn’t blame him for the incident – after he was teaming with Sheamus on SmackDown against E and Kofi Kingston when a mishap while he was hitting a suplex caused the former world champion to land on his head.

Big E has been updating fans on his recovery, and Ridge exclusively told Metro.co.uk: ‘It was a massive knock to my confidence. The main thing is that E’s functional, he’s OK, he’s gonna live a full life.’

Ridge has featured on WWE TV as part of the Brawling Brutes trio with Sheamus and Butch, although the group haven’t appeared as much in recent weeks – and he’s hoping that will change.

‘From a personal standpoint, I’d like to get in the ring more and show people what I can do because there is a stigma there with the Big E thing,’ he admitted.

‘So, I wanna show people what I can do and how good I can be, and wash that stain off my back.’ 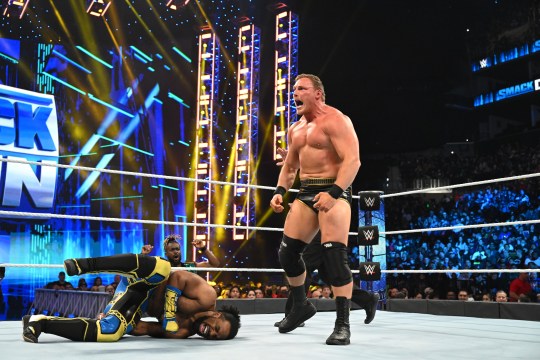 As well as regaining confidence in himself as a performer, Ridge is also looking to build ‘that trust up’ with his fellow performers, which is paramount in such a physical art form..

‘It’s just been a slow process, getting back into it and learning how to trust myself, and obviously building that trust up with the boys as well. The trust of your peers is what we aim for,’ he explained, while repeatedly noting that the real focus is on Big E and his recovery.

‘He’s absolutely fine, I’m in contact with him – not as much as I was because I think I was annoying him slightly,’ he laughed. ‘For me, personally, the main thing is that Big E’s gonna be OK. 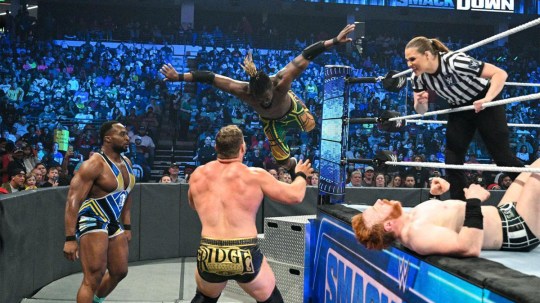 The accident occurred as The New Day faced Ridge Holland and Sheamus on SmackDown (Picture: WWE)

‘That’s the number one, regardless of how I feel, regardless of what’s come to be. The main thing is that he’s his positive self, he’s cracking on and hopefully we’ll see him back in the not to distant future!’

Naturally, Ridge has needed some support too after the accident, and he’s been able to rely on his own peers, as well as British wrestling legends like Fit Finlay and AEW’s William Regal for guidance.

‘[Sheamus and Butch have] been really good, checking in on me and just telling me everything’s going to be OK,’ he smiled. ‘He’s not in the company anymore, but I was in contact with William Regal, Fit Finlay’s given me plenty of advice, as have numerous people so I’m very grateful for that.’

Before the injury, it seemed The New Day and Brawling Brutes were on track for a six-man tag team match at WrestleMania 38 in Dallas, Texas back in April, and Ridge would love to revisit that plan in the future.

He said: ‘I’m sure we’d absolutely tear it up if we got given a bit of time. There’s no doubt in my mind that those three guys and us three would have absolutely tore it up, no doubt.’

Looking ahead, WWE’s focus is squarely on September 3, when Clash At The Castle is held in Cardiff, Wales and the company puts on its first UK stadium show since SummerSlam 1992. 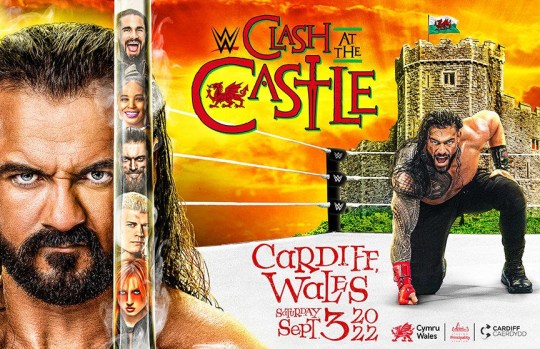 Ridge is looking ahead to Clash At The Castle (Picture: WWE)

‘It’s just total excitement and a bit of nervousness,’ Ridge said, with the big event just two weeks away. ‘Not a lot of people – especially performers – admit to being nervous, but nerves appear when you care! It’s a big thing, it’s the first time in 30 years we’ve had a marquee pay per view in the United Kingdom.’

Although he was just four years old and being shown World of Sport replays by his nan in 1992, the star has gone onto watch the Wembley Stadium show ‘countless times’ as he developed his love for wrestling.

‘The Bret and Bulldog match is a classic, isn’t it? It’s family, the little sunset flip into the roll-up for the finish for Bulldog was awesome, a real good hometown feel for him,’ he added.

‘Everyone was behind him and I hope that’s the same for the guys that are from the UK on the show in Cardiff!’

Clash At The Castle, the UK’s first major WWE stadium event in over 30 years, takes place at the Principality Stadium in Cardiff on Saturday 3rd September. For tickets visit: https://www.ticketmaster.co.uk/wweclash.