The Beast Incarnate would cause chaos on the pitch (Pictures: Getty)

Paul Heyman claims WWE monster Brock Lesnar got become a football superstar to challenge the likes of Neymar and Cristiano Ronaldo if he decided not to return to wrestling.

The SmackDown star, who will accompany Roman Reigns to the ring for his Universal Championship defence against Edge at Sunday’s Money In The Bank event, has been by the Tribal Chief’s side since last summer, with fans not seeing the Beast Incarnate for almost 18 months.

Asked where his allegiance may lie if and when Brock returns, Heyman exclusively told Metro.co.uk: ‘Well, that’s a hypothetical question and I deal in facts, not hypotheticals. My father used to say, “If, if, if – if your aunt had balls, she’d be your uncle. She doesn’t, so she’s not.”

‘If Brock Lesnar wants to join football and run circles around Neymar and Ronaldo and [David] Beckham, he will. If Brock Lesnar to get involved with rugby, he’ll smash every record of any rugby player in the history of the game – and he will.’

Heyman insisted he wouldn’t be letting himself worry about being the man in the middle when it comes to Reigns and Lesnar, and suggested he’d take it as it comes. 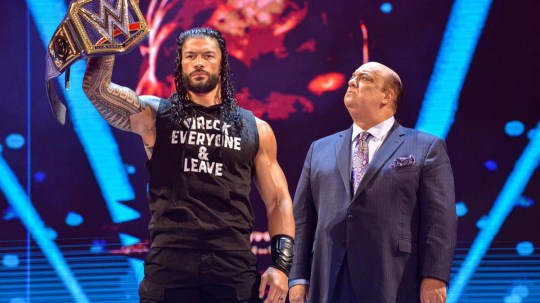 ‘Brock Lesnar does what Brock Lesnar wants to do,’ he shrugged. ‘So I’ll burn that bridge when I have to cross it.’

While it seems unlikely the former world champion will actually end up in the next World Cup, he’s recently changed his hairstyle in a way even Becks would be jealous of.

In picture shared by The Bearded Butchers, Lesnar – who filmed with hunting and cooking duo Seth and Scott Perkins for an upcoming video on their YouTube channel – looked totally different as he sported a ponytail and goatee.

They teased: ‘Brock Lesnar returns with a NEW LOOK and he’s hanging out with The Bearded Butchers! Full Youtube video coming soon to our channel. (sic)’

WWE fans haven’t seen Brock for a long time, with his most recent TV appearance coming in April 2020 when he lost the world championship to Drew McIntyre in the main event of WrestleMania 36.

Ever since that night, everyone’s been clamouring for a return – but now fans aren’t too sure about his new look.

Another questioned: ‘Is this real?’

While a different fan described it as ‘traumatising’, someone else compared Brock to Buddy Murphy after the recently released WWE star seriously beefed up following his recent departure.

Maybe if Brock doesn’t return to WWE this summer, he could get working on a role in Amazon’s Lord of the Rings series? Surely they have the budget!

*WWE SmackDown airs Fridays at 1am on BT Sport.