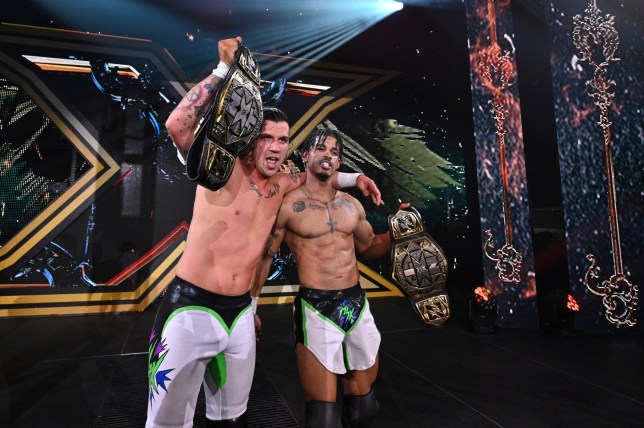 The thrilling team are taking NXT by storm (Photo: WWE)

MSK have taken the WWE by storm, but the exciting duo still remain something of an enigma.

Wes Lee and Nash Carter – who captured the NXT Tag Team Titles last month just weeks after debuting in this year’s Dusty Cup – appeared in a whirlwind of hype and excitement, and immediately endeared themselves to fans with their thrilling in-ring style.

However, the pair – formerly known as The Rascalz on the independent scene and in IMPACT Wrestling – are still a mystery on some level, with the exact meaning behind their new name being kept under wraps.

Wes exclusively told Metro.co.uk: ‘It’s us. MSK is Wes Lee and Nash Carter. It’s what we stand for. It’s who we are. It’s what we do. It’s a lifestyle. It’s a mentality.’

While Nash laughed and admitted the duo “like to keep people guessing” – before both stars paraphrased the beloved ‘Life’s like a box of chocolates’ line from Forest Gump – his partner suggested there is more to it.

‘It’s like our matches. You never know what to expect from us,’ Wes pondered. ‘People identify us as highflyers, but that’s not all we do.

‘We learned highflying because that’s what was exciting to us, but we know how to punch somebody in the mouth, we know how to snap an arm. We know how to get gritty and nasty as well – so you never know what you’re gonna get with us.’

For the rising stars, WWE has been a lifelong dream for them both, and they were stunned when they finally got the call making that dream come true.

Wes added: ‘When we got the call, that was… “hey, we’re about to start pulling you from the Matrix and making your lives a reality!”

‘But then at the same time, they plugged us right back in and it’s making everything that we wanted to have come true. So, it’s hard to believe that this is our reality.’

Like their matches, the past few months have been a whirlwind of energy and excitement for the duo, and they feel their quick rise to the top of the division is pretty fitting.

‘Once we got the call, at least for me, I knew this is the place I wanted to be. I’ve always wanted to be a WWE superstar, I always loved WWE and this place, what we have access to, is second to none. It’s the greatest thing in the world.’ 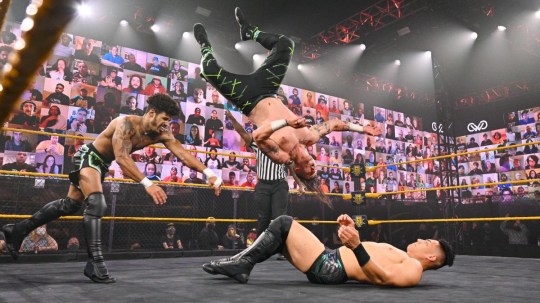 Of course, their signing – and introduction to WWE’s NXT fanbase – has come during a tough time for the industry and world as a whole, as they signed late last year in the middle of the pandemic.

‘There’s a lot of times that it does bring me to tears because it happened in the midst of a very dark time for the world,’ Wes admitted.

‘That we were able to have this beacon of light to lead us out of this moment of darkness – it’s great! Now we just hope we can be that for others as well, to use this to spread as much positivity and love as we can.’

Looking to the future, the team are keen to hold onto their NXT Tag Team Titles for as long as possible, and ‘get ’em back’ if they do end up losing them.

‘These are being held for a very long time. We have a lot of goals with the tag team division and we wanna make sure we accomplish those,’ Wes smiled.

‘And then, we’ve gotta dominate everybody on the main roster, we’ve gotta get those tag team championships as well. I mean, we’ll just take it day by day.’

Nash laughed: ‘I think what we’re striving to be is to be the greatest tag team of all time.’

You’d be a fool to bet against them.

*Watch MSK on WWE NXT every Wednesday night at 1am on BT Sport.