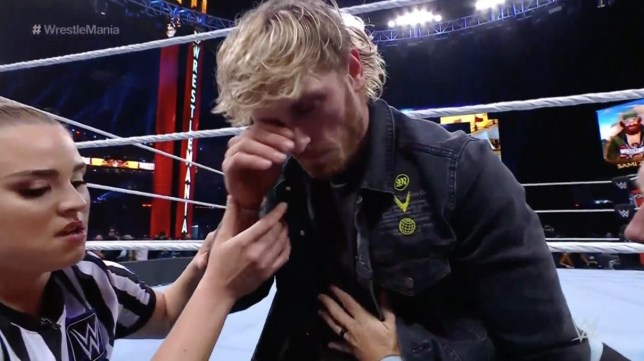 Logan Paul was on the receiving end of a Stunner from Kevin Owens after the latter’s match with Sami Zayn at WrestleMania 37.

The YouTuber has been involved in the latest chapter of the pair’s career-spanning storyline in recent weeks, with Zayn becoming obsessed with a so-called conspiracy theory against him within WWE.

It led to Logan being his guest of honour at Raymond James Stadium on Sunday night, and the star was largely kept out of the way as he watched on from ringside.

Owens and Zayn – who have tore it up all over the world on every level throughout their careers – delivered on the grandest stage, with some fantastic in-ring work which kept the crowd engaged.

Sami almost picked up the win too, but his determination to hit a second Helluva Kick cost him dearly as he got caught with a couple of superkicks and a Stunner to bring the match to an end.

Logan then hopped in the ring, switching sides and celebrating with KO, much to Zayn’s disappointment as he pointed out he brought him into WWE for this appearance.

He stormed off, leaving the star to celebrate with Owens – whose win was predicted by Nick the dolphin – which the former world champion didn’t take too kindly at all.

As the crowd chanted in anticipation of what was to come, Logan played his part to perfection, absolutely deluded as he egged them on without realising what was coming his way.

KO dropped him with a huge Stunner, delighting the fans in attendance and putting an exclamation point on Logan’s brief WWE tenure.

He was the second crossover celebrity to appear over WrestleMania weekend after Bad Bunny delighted fans with his incredible performance on Saturday night.

The Grammy Award-winning musician threw himself wholeheartedly into his tag team match, doing the bulk of the work before he and Damian Priest hit a doomsday crossbody to beat The Miz and John Morrison.

Before Logan’s appearance during the KO/Zayn match, fans had seen Alexa Bliss cost The Fiend his match with Randy Orton in a very bizarre opener, while Nia Jax and Shayna Baszler retained the Women’s Tag Team Titles despite the best efforts of Natalya and Tamina.