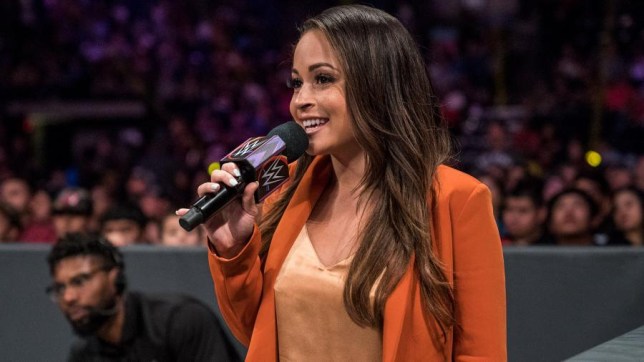 The broadcaster made the announcement this week (Photo: WWE)

WWE star Kayla Braxton appears to have left Twitter account just hours after she came out as bisexual.

The 27-year-old personality – who works for the company as a backstage interviewer and panellist among other roles – made a powerful announcement on Wednesday night after sharing a picture of the bisexual pride flag.

Her break from the platform comes after she dropped an inspirational announcement for her followers while referencing her own heritage.

She tweeted: ‘My whole life, I’ve had to choose. Are you black? Are you white? Which bubble do you fill in on the SATs?

‘I always filled in “other” because nothing applied to me. Tonight, I choose to be over having to choose. Hello world. I’m Kayla. Oh. And yeah – I’m Bi.’

Her post was quickly flooded with messages of support, with WWE Hall of Famer – and current NXT commentator – Beth Phoenix one of the stars to respond with a hugging emoji.

Lance Storm added: ‘You be you, and be happy.’

Her fans also showed their support, with one follower writing: ‘Congratulations always be happy who you are I’m proud of you (sic)’

Another said: ‘We love you. We see you. We support you.’

And a different user tweeted: ‘Congratulations Kayla! Very proud of you, You be you and stay true to yourself and be happy!’

Meanwhile, it doesn’t seem likely that Kayla will be looking for love at work after she jokingly dismissed a follower who asked if she only dates wrestlers.

In the brilliant recent social media exchange, she quipped: ‘ I pretty much only exclusively… don’t date wrestlers.’

Kayla first signed with WWE in 2016, and made her main roster pay-per-view debut in a backstage segment at Backlash 2017, while going onto work as a ring announcer in NXT and appearing on Raw, SmackDown and 205 Live.

She can be seen every week on SmackDown, while she also anchors The Bump web show every Wednesday and co-hosts Talking Smack with Paul Heyman on the WWE Network.