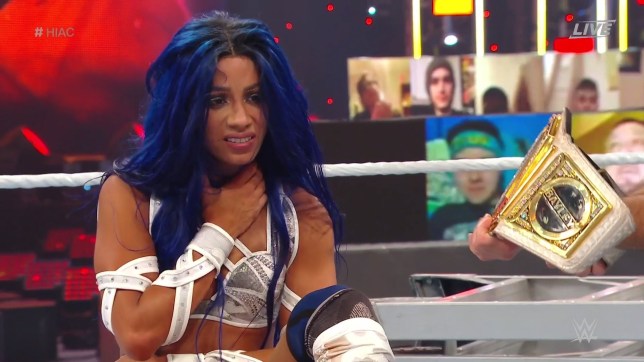 Sasha Banks and Randy Orton turned WWE upside down with two major title changes at Hell In A Cell.

Although the Legit Boss deserved to get her crowning glory in the main event – more on her era-defining match with Bayley below – it was the Viper who stood tall as the show went off the air after a physical brawl with Drew McIntyre.

The Scotsman has stood on top of the Raw roster throughout the pandemic, and his clash wit Orton was worthy of the WWE Championship, but his title reign has ended at the hands of the Apex Predator.

In a clip which will be played again and again, Randy threw Drew off the side of the cell through the announce table, and both men went above and beyond in a crisp and engaging main event.

It was a fitting end to McIntyre’s reign, even if it wasn’t quite deserving of the final spot on a card loaded with top level storytelling from the three cell matches.

It’s unclear where these two will go from here, as this really should be the end to their feud, with Randy needing a new opponent to get his newest run at the top started on the best foot.

His latest triumph is a fully deserve one, as Orton has been the MVP of Raw this year, and provided a fascinating foil for Drew over summer and into the autumn months.

Now, he’s the top dog and mouthwatering matchups await before a potential Mania rematch with Edge once the Rated R Superstar is fit enough to return.

Best of the rest

Roman Reigns and Jey Uso delivered a masterclass in storytelling as they opened Hell In A Cell with a brutal, draining and beautiful I Quit match.

The two cousins warred over the Universal Title and family pride in a match worthy of the barbaric structure, with both men delivering emotion in spades.

In the end, Jey only said ‘I quit’ as Roman destroyed his twin brother Jimmy, saving his sibling despite the consequences.

Afa and Sika – the legendary Wild Samoans – made a surprise appearance after the bell, crowing Reigns as the true Tribal Chief at the head of the table.

After such an intense opening, whoever want on second would have a tall task trying to keep anyone engaged.

Elias started well with his usual musical schtick, even if he did pull things back to Jeff Hardy’s personal issues before their match.

The pair did their best in an impossible situation, putting on a fun offering – one of the busker’s better in-ring efforts – which ended when Hardy grabbed the guitar from his opponent and decked him for the DQ.

Miz and Otis had a match which was exactly as you’d expect it to be, until Tucker gave us the most 2020 ending possible when he turned on his best friend and broke our hearts.

A briefcase shot from Tucky was enough to put his former Heavy Machinery partner out for the count, giving Miz a big win and the MITB contract.

After the bell, Tucker insisted he was the driving force for their team, with Otis stealing the spotlight and making his partner the afterthoughts.

It was a money promo which ended with Otis attacking him backstage for a measure of revenge – but the issue here is that they’re on separate brands just as they’ve kicked off the feud.

In a surprising move, Sasha Banks and Bayley didn’t main event the show, but they still delivered a definite match of the year candidate and one of the all-time great clashes.

This was everything it needed to be, with inventive and brutal spots and a pace which distanced it from the opening contest while taking full advantage of the environment.

When all was said and done, the Legit Boss picked up the win with a Bank Statement using the chair in a poetic moment which earned her the one title which has evaded her.

In a match set up on the Kickoff, Slapjack faced Bobby Lashley in a losing effort for the US Title in another baffling decision which made RETRIBUTION look utterly terrible.

Mustafa Ali has all the skills to be a main event player, but the gorup has no momentum and seems dead in the water.

Something needs to change, because the faction has failed to capitalise on their early promise.