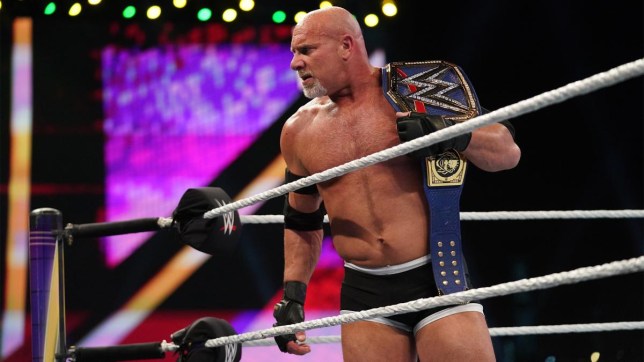 The former champ has his eye on some great rising stars (Credit: WWE)

WWE legend Goldberg has weighed in on the future of the business – and Ricochet has caught his eye.

The former world champion – who will challenge Drew McIntyre for the WWE Title at the Royal Rumble this weekend – also had high praise of his opponent as he contemplated the younger superstars on the roster with the potential to become massive names.

He told WWE UK: ‘I mean the usual suspects… Drew McIntyre, Keith Lee and Ricochet. I’ve always been a HUGE fan of Finn Balor. I’d have to say those four are the future. There’s no question about it. In my opinion. And what do I know?’

The respect is mutual in some cases, with the current NXT Champion recently saying he welcomes the likes of Goldberg back into the fold because the legends of the past still have something to offer.

Balor exclusively told Metro.co.uk: ‘For me, when the tide comes in, all the ships rise… If we can have Goldberg on the show, if we can have anyone on the show for one night, I feel it’s better one night than never. I welcome these legends with open arms!’

Despite his kind words, Goldberg hasn’t been drawn into speculation about who could await him at WrestleMania 37 if he topples McIntyre on Sunday.

‘Wow. That’s an interesting question. You know, I’m going to plead the 5th and just say I don’t care. It doesn’t matter. I’ve got to get through Drew first,’ he pointed out.

‘He’s the only one on my mind, I’m not looking past him for one second. He deserves the respect from a guy like me, he really does. I hope that I can conquer him, absolutely. 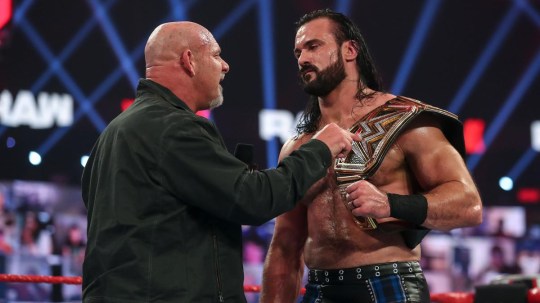 The two heavyweight clash at the Rumble (Photo: WWE)

‘Whoever the opponent is that wins the Rumble and gets to compete against the champion at [WrestleMania], it’s going to be a wonderful fight whoever it is. I’ve got to kick Drew’s ass first.’

And the WCW icon has great respect for Drew and his rollercoaster ride to the top of the industry – although he feels he’s a good measuring stick to see how far he’s actually come.

He added: ‘I haven’t watched all of it but I have been attentive, no question. Even though I have been away you need to check in and make sure that your product is being represented by the right people.

‘I’m a fan of Drew. I appreciate what he has done. I appreciate the long road to his success that he has travelled. My question though: is he ready? We’re not going to know until he steps in the ring with me.’

*Watch Goldberg challenge Drew McIntyre for the WWE Championship at the Royal Rumble on Sunday, January 31. Tune in at midnight on the WWE Network.