The Colossal gets candid on his past (Picture: WWE)

WWE superstar Omos has opened up about the moment he found out he had a brain tumour.

The giant 27-year-old wrestler – who stands at seven foot three and appears on the company’s Raw brand – was in his teens when he discovered he had a tumour in his pituitary gland back in 2012, and initially he couldn’t believe it.

A college coach received an email from someone ‘very high up’ on campus who had picked up on the signs and wanted Omos to get it checked out ‘ASAP’.

Appearing on ‎Out of Character with Ryan Satin, he said: ‘I’m reading this email, like, “No way, I am fine.” I looked at my coaches and I said, “I don’t think I have anything but hey, I’m gonna do it just so I can have peace of mind.”

‘The next Wednesday they set up an MRI appointment. The MRI takes about a couple of days [to come back]. That following Monday, I came to practice. I go to the trainer’s room. They said to go upstairs to the coach’s office.

‘I walked into the coach’s office and there was the President of the University and all the doctors from the office were there.

‘They said, “So this is an MRI right here of your brain. Do you see that little speck right there? You have a brain tumor. We don’t know whether it’s benign or it’s a cancerous tumor, and we’re going to have to figure out how to deal with this.” ‘

Within a few weeks, the former basketball star – who has already held the Raw Tag Team Titles with AJ Styles during his relatively brief WWE career thus far – had undergone surgery, which he described as ‘very traumatic’. 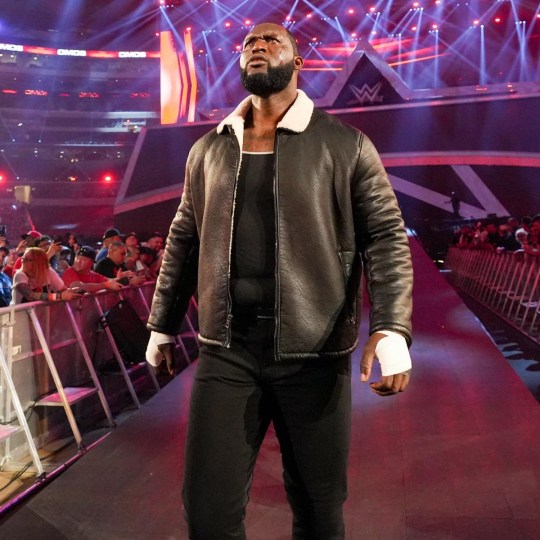 Omos has become a force to be reckoned with (Picture: WWE)

He added: ‘Literally a month after the MRI, I had the surgery and they had to go through my nose. It was very, very traumatic.

‘But in the process of doing the testing, they found that not only do I have the pituitary tumor, I have partial Cushing’s disease, which is very rare.

‘There’s different forms of large human beings, but it’s a different variation and I had all of these combinations.

‘It was the first time in medical history with someone with all three together. It became this sort of anomaly in the medical world. I had a journal published about my case.’