WWE superstar Drew McIntyre thinks he should face Tyson Fury in a brutal No Disqualification match to get the best out of the boxer.

The former world champion appears to be on a collision course with the fighter – who has also talked up the possibility of facing the Scottish Warrior if and when he returns to the world of wrestling – and he has suggested a special environment to help them have the best bout possible.

Asked about the ideal stipulation if the so-called Battle of Britain ends up happening, he exclusively told Metro.co.uk: ‘No DQ. Just based on his limitations and physical attributes, I think that would be the most entertaining match for everybody.

‘In that environment, we could get away with a lot more. It would be a good first match – I mean, he’s had one, but a good, proper first match that people go, “That was a good match”. And it’d be very entertaining for the fans, if that was the stipulation.’

There has been plenty of trash talking between the two heavyweights, but Drew candidly opened up on how he’d approach the bout as a performer having to work with an outsider in Fury, whose only official match saw him defeat Braun Strowman at Crown Jewel 2019.

‘I know he’s not gonna be doings 450s, intricate move sequences. But it’s my job as somebody who’s been around for 20 years to look at the situation logically, figure out the best way to approach my match with his athletic abilities – and entertainment – that he brings to his world and our world,’ Drew admitted.

‘I like to think I’ve shown at this stage I can put together a match with pretty much anybody, no matter where they’re at – including Fury, and he’s got a lot more to work with than some of our superstars who are less experienced that I’ve worked with.’

A big factor in the quality of a dream showdown between McIntyre and Fury would be the latter’s undeniable passion for WWE, and the Scotsman drew comparisons to Grammy Award-winning artist Bad Bunny after his own highly-praised in-ring debut at WrestleMania 37 earlier this year.

‘It makes a night and day difference – just take one second and watch Bad Bunny at WrestleMania and you’ll see a guy who is the biggest superstar in the world in his genre, and he’s absolutely killing it,’ he said.

‘[Bad Bunny] does have that genuine passion. He’s somebody I watched from afar – he’d be at our show almost every week. I didn’t interact with him too much, i just watched him and observed, and I could see, “This guy’s putting in the work, he clearly loves this.” ‘ 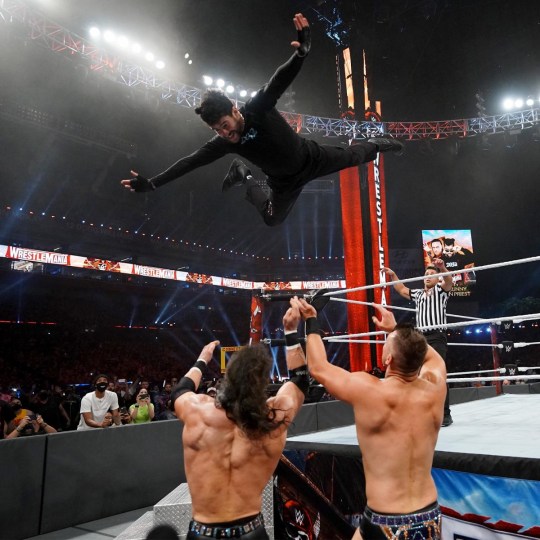 Drew sees the same desire in Fury, and he’s sure the boxer would hold up his end of the bargain if they do step between the ropes.

‘He’s on top of the world in his industry as well, but he just has a genuine passion for it, such an entertainer, he gets it,’ he enthused. ‘Eventually, if we have that big match, whatever capacity, I know how good it’s gonna be just with his abilities, passion, and my experience and knowledge.’

The match would be sure to bring a lot of publicity for WWE, with such a major crossover star stepping back between the ropes – and McIntyre is sure they’ll both be able to handle the ‘highly physical’ demands.

‘I don’t think I’m worried about hurting him, he’s used to getting punched in the head for a living,’ he laughed. ‘I know I can take a hit. I’m not gonna go ahead and call him old feather fists, I know he gets offended by that! It would be highly physical and highly entertaining, I know that.’

It remains to be seen if and when this bout will get booked, but fans are desperately hoping for a massive UK stadium show in 2022, with a suspicious gap in the pay-per-view schedule next September.

Asked outright if there’s any update on the situation, WWE executive Stephanie McMahon exclusively (and coyly) told Metro.co.uk: ‘There is no formal announcement, but I will just say – we’ve been saying it for a while, but we are excited about upcoming announcements.’

And Drew himself is adamant it’s going to come to fruition, as he added: ‘A UK pay-per-view is gonna happen one way or another – I don’t care if it’s in Glasgow, London, Cardiff, Manchester, wherever! I don’t care where it happens – as long as it happens, that’s all that matters.’

WrestleMania 38 travel packages are on sale NOW for AT&T stadium in Dallas, Texas in April 2022.