The Archer of Infamy is one third of the intimidating trio alongside Rhea Ripley and Finn Balor with the latter joining after they attacked the Rated R Superstar and booted him from his own group.

Priest exclusively told Metro.co.uk: ‘It was an easy transition because I’m getting to be around my friends. I think if it would’ve been a different situation, another circumstance it may have been difficult or just uncomfortable but this one was easy.

‘The idea of what we’re doing on TV is actually real to us backstage, which is, there’s no leader. We’re all equals and we kind of help guide each other and make each other bigger stars.’

The former United States Champion insisted the purpose of the group is to elevate all three stars collectively, rather than having one of them stand out with the others taking a background role.

‘That’s the point – how can we help each other and become the biggest stars we can be and have the most success that can be had, while also having a great time,’ he smiled. 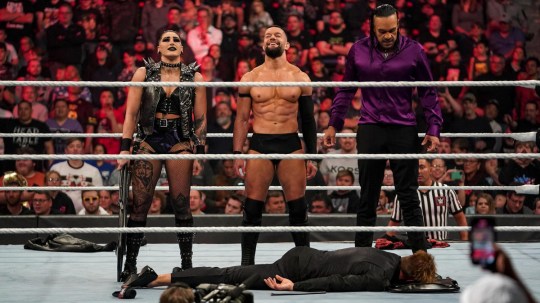 The Judgment Day are at odds with Edge two months after kicking him out of the group (Picture: WWE)

He admitted going to work with Finn and Rhea every night is ‘easy’, and there’s not much of a difference in their antics and attitude when they’re behind the scenes.

‘The Judgment Day, with Finn Balor and Rhea Ripley – it’s easy when you get to work with your friends and people that you just adore and get along with,’ he said.

‘When we’re in the back – I know people think that we’re causing chaos on TV, but off camera we’re the same. We’re just loud and having a good time, doing what we do, acting the way we wanna act.

‘We’re loving what we’re doing together because we actually enjoy each other’s company, so it’s pretty cool.’

The shared goals and motivation to help each other is something Priest thinks sets up the group for huge success, especially with Clash At The Castle coming to the Principality Stadium in Cardiff, Wales on September 3.

He added: ‘We [help] each other and I think the Judgment Day – it’s not gonna fail because of that. We believe in each other, and we’re having a blast doing it.’

Catch all the action from WWE’s Clash at the Castle live on BT Sport on Saturday, September 3. For more info go to btsport.com/sport/wwe.