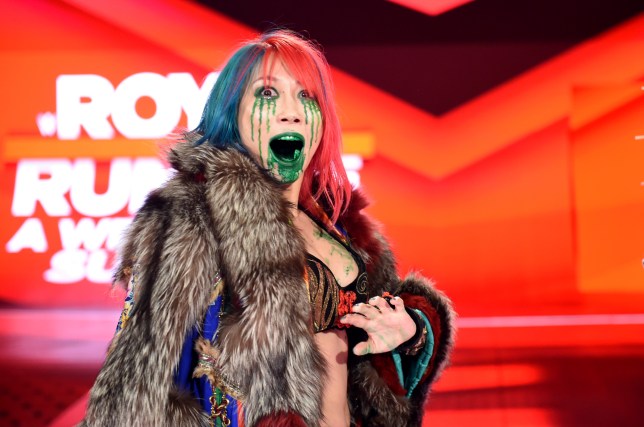 The Empress of Tomorrow didn’t experience any racist abuse until the pandemic (Photo: WWE)

WWE superstar Asuka experienced racism for the first time during the Covid-19 pandemic.

The Japanese wrestler has opened up on anti-Asian hate crime and admitted while she never suffered anything before the global health crisis, she was ‘shocked’ by an incident at an airport last year.

She told ET Canada: ‘I have only one experience with racism. It was around the time when Covid-19 started spreading. In America, I was at the airport. A woman came towards me.

‘When she noticed me, she covered her mouth with her hand and ran away from me. I was shocked.

‘It never happened before Covid-19. Oh my gosh. I didn’t understand. I was shocked.’

The 39-year-old star – who is facing Charlotte Flair and Rhea Ripley for the latter star’s Raw Women’s Championship at WrestleMania Backlash on Sunday – questioned why people feel motivated to be ‘hateful’.

When it comes to other people supporting Asian communities, Asuka urged them to ‘share the wonderful culture’ as she revealed her pride.

She explained: ‘I think it’s important for non-Asians to understand and share the wonderful culture of Asians. I love Japanese culture such as anime and manga, cards and video games.

‘Some American people tell me they love Japanese anime such as Dragon Ball, Naruto. I’m proud of being Japanese.’

She also gave advice to Asian girls who want to follow in her footsteps and become a WWE superstar after her mother and high school teacher played down her ambitions.

She added: ‘I want to say to Asian girls, don’t give up on your dream. So when I was sixteen, I wanted to be a WWE superstar.