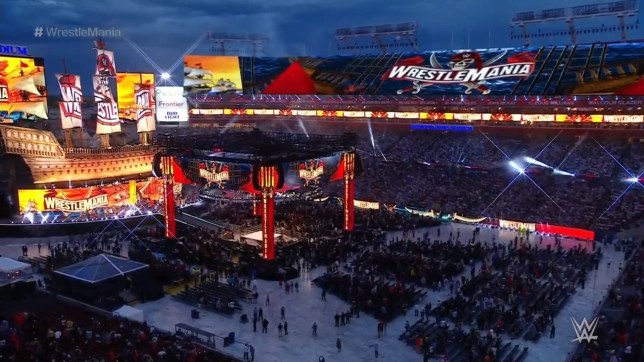 Raymond James Stadium has 25,000 fans waiting for the show to get underway (Photo: WWE)

WWE fans have returned at WrestleMania 37 – but the start of the show was delayed due to storms in the Tampa area.

Moments after the event went on air, veteran commentator Michael Cole revealed that the first match – which will pit WWE Champion Bobby Lashley against Roman Reigns – has been postponed slightly.

Local WFLA reporter Daisy Ruth – who has been live tweeting from within Raymond James Stadium – confirmed on Twitter: ‘#BREAKING – For the first time in #WrestleMania history – we are on a lightning delay.’

The night had opened on an emotional level with Vince McMahon addressing the live crowd from the WrestleMania stage with the whole roster flanking him.

It was an emotional moment for everyone involved as WWE takes over Tampa a year later than planned after 2020’s edition was forced to take place behind closed doors at the Performance Center due to the pandemic.

Instead of the opening match getting underway immediately, Cole sent fans backstage as Shane McMahon was interviewed.

However, he was soon interrupted by Lashley as the All Mighty had some strong words for his challenger, who was just as intense as he joined the fray.

Lashley’s Hurt Business manager MVP stopped the pair from coming to blows backstage, and WWE spent a bit of time making sure everything is safe to truly get underway before revealing the show would resume at 1.30am GMT.

Elsewhere on tonight’s show, Cesaro and Seth Rollins will clash in a dream match which Paul Heyman told Metro.co.uk could earn the crown for greatest WrestleMania match of all time.

He said: ‘I would love to have seen Brock Lesnar versus Cesaro, it just wasn’t something that ended up happening. I think Cesaro’s in a wonderful position right now and is poised to put on an all-time great WrestleMania match with Seth Rollins.

‘You are looking at two of the truly great performers of this generation that can put on what could rival any match that has ever occurred at WrestleMania for the title of the greatest WrestleMania match of all time.’

Elsewhere, Omos makes his debut alongside AJ Styles against The New Day members Xavier Woods and Kofi Kingston, and Bad Bunny teams up with Damian Priest to take on The Miz and John Morrison.

And in an historic main event, Sasha Banks defends the SmackDown Women’s Championship against Bianca Belair.