Honoring his father’s legacy. Nearly three months after Willie Garson died of cancer, his son, Nathen Garson, got a special invitation to the premiere of HBO Max’s And Just Like That.

“What a wonderful trip and what an amazing time I got to have,” Nathen shared via Instagram on Thursday, December 9, alongside a group pic with his late dad’s costars Chris Noth, Cynthia Nixon, Sarah Jessica Parker and Kristin Davis. “Thanks @justlikethatmax for a wonderful time and for inviting me to enjoy the season premiere of And Just Like That! Go check it out on HBOmax!”

Nathen confirmed on September 21 that the Sex and the City alum died at age 57 following a private battle with pancreatic cancer.

“I love you so much papa,” the college student shared via Instagram at the time. “Rest In Peace and I’m so glad you got to share all your adventures with me and were able to accomplish so much. I’m so proud of you. I will always love you, but I think it’s time for you to go on an adventure of your own. You’ll always be with me. Love you more than you will ever know and I’m glad you can be at peace now. You always were the toughest and funniest and smartest person I’ve known. I’m glad you shared you’re [sic] love with me. I’ll never forget it or lose it ❤️😘” 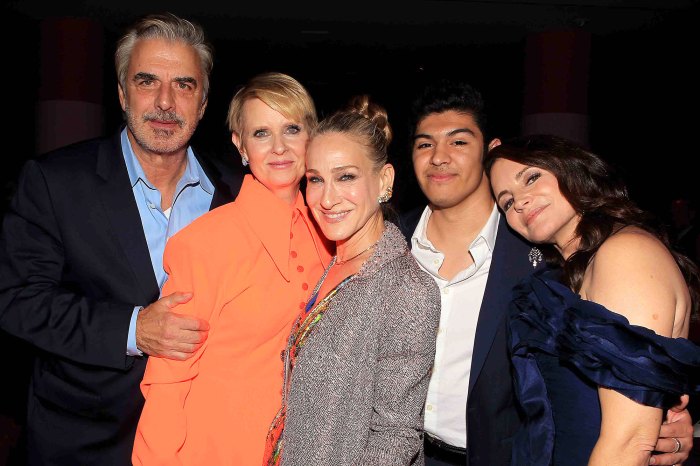 Following the Freaky Friday actor’s death, several members of his SATC family paid tribute to their colleague, sharing their favorite memories from set.

“It’s been unbearable. Sometimes silence is a statement. Of the gravity. The anguish. The magnitude of the loss of a 30 + year friendship. A real friendship that allowed for secrets, adventure, a shared professional family, truth, concerts, road trips, meals, late night phone calls, a mutual devotion to parenthood and all the heartaches and joy that accompany, triumphs, disappointments, fear, rage and years spent on sets (most especially Carrie’s apartment) and laughing late into the night as both Stanford and Carrie and Willie and SJ,” the Hocus Pocus star, 56, wrote via Instagram on September 24. “Willie. I will miss everything about you. And replay our last moments together. I will re-read every text from your final days and put to pen our last calls. Your absence a crater that I will fill with blessing of these memories and all the ones that are still in recesses yet to surface.”

The White Collar alum was prominently featured in the first two episodes of the SATC revival, which premiered on HBO Max on Thursday. His character, Carrie Bradshaw’s BFF Stanford Blatch, was still married to Anthony Marentino (Mario Cantone) — but the pair bickered nonstop. Though his role on And Just Like That is now his final acting credit, he made a memorable impression on his newest costars.

“I spent a lot of time with Willie Garson, who I know we all miss very much and I miss very much,” Niall Cunningham — who plays Miranda’s son, Brady, in the new series — exclusively told Us Weekly on Wednesday, December 8. “I knew him very briefly, but it was great to talk with him about just, like, how long he had known Sarah Jessica.”

Cunningham, 27, added at the time: “There’s always one New York actor who you’re like, ‘I’m gonna be friends with that person.’ I could feel it. I feel very grateful for the time I had with him, just talking about old movies we love. … He was such a fun person to be around.”