A prescient thought? Will Smith opened up about protecting his family in an interview that was taped before his headline-making appearance at the 2022 Oscars.

The Ali star, 53, detailed the realizations that led to his two-year break from acting in an episode from season 4 of Netflix’s My Next Guest Needs No Introduction With David Letterman, which premiered on Friday, May 20.

“I wasn’t miserable as much as everything kind of lost its luster,” the Oscar winner explained. “I think it’s the natural journey of humanity when we realize that the material world is completely, utterly and totally incapable of sustaining our happiness.”

When host David Letterman clarified that Smith meant nothing could give him satisfaction “beyond the essentials of protecting yourself and your family,” the Philadelphia native replied: “You can’t protect your family, right? That’s not real.”

The “Miami” rapper went on to say that he’d learned to acknowledge the fact that all his success could instantly disappear. “Protection and safety is an illusion,” he added. “You have to learn to live with the reality that [at] any moment, anything can be gone in one second. So, with that reality, how can you be here? And how can you be joyful and be here?” 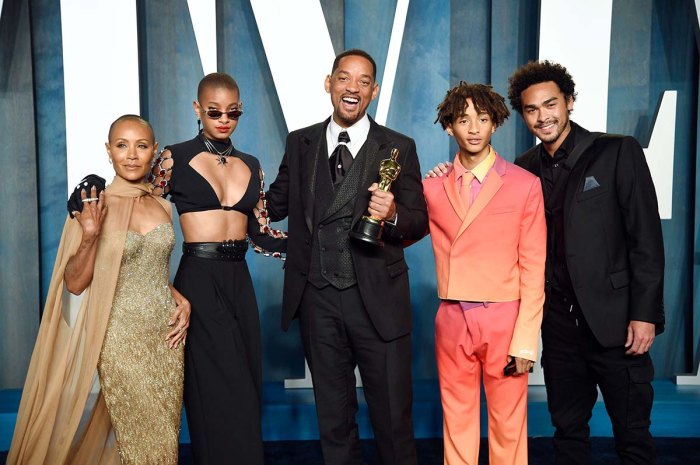 A disclaimer at the beginning of the episode noted that it was filmed before the 2022 Academy Awards ceremony in March, where Smith slapped Chris Rock after the comedian, 57, made a joke about Jada Pinkett Smith‘s hair. When the Men in Black star accepted his best actor trophy later in the evening, he opened his speech with a comment about how Richard Williams was a “fierce defender of his family.” (Smith played Williams, now 80, in King Richard.)

“In this time in my life, in this moment, I am overwhelmed by what God is calling on me to do and be in this world,” the Seven Pounds actor, who was later banned from the awards show for the next 10 years, continued. “Making this film, I got to protect Aunjanue Ellis, who is one of the most strongest, most delicate people I’ve ever met. I got to protect Saniyya [Sidney] and Demi [Singleton], the two actresses that play Venus and Serena [Williams]. I’m being called on in my life to love people. And to protect people and to be a river to my people.”

During his interview with Letterman, 75, Smith indicated that some of his recent introspection came about because of the 2016 death of his father, Willard Carroll Smith Sr. “That was the first time I felt like I was free to be able to talk about my experiences,” the Gemini Man star explained.

The Fresh Prince of Bel-Air alum also opened up about his 2021 memoir, Will, in which he discussed the way his parents’ relationship shaped him as an adult.

“When I was 9 years old, I saw my father beat up my mother, and I didn’t do anything,” Smith told the former Late Show host. “And that just left a traumatic impression of myself as a coward.”

The Wild Wild West star noted that he’s been able to use his emotional revelations in his work. “Life is so exciting to me right now, because I can reach people differently than I’ve ever been able to reach people, largely because of my pain,” he said. “I’m really ready to dive into my art in a way that I think will be hopefully fulfilling for me and helpful for the human family.”

Season 4 of My Next Guest Needs No Introduction With David Letterman is now streaming on Netflix.